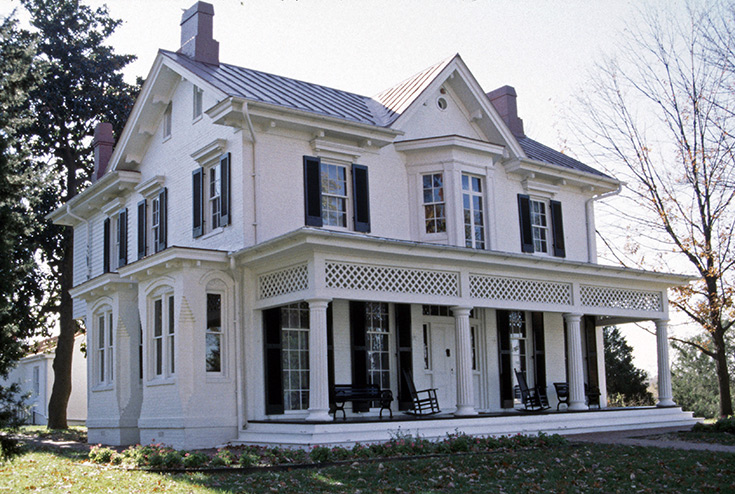 Father Patrick F Healy and Georgetown University
DESCRIPTION: He was the first African-American Jesuit and president of a non-historically-black American college in 1874. Father Healy is best known for turning this once small college into a globally respected academic institution. Built in 1879, the Healy Building still dominates the campus. He is buried in the Jesuit cemetery on campus.
ADDRESS: 37th and O Streets NW, Washington, DC MAP
RAPID TRANSIT: none

Whitehurst Freeway
DESCRIPTION: This working freeway was built by Archie A. Alexander’s general contracting firm. Alexander was the last man captured during the Fugitive Slave Law. He helped open construction trades in Washington DC and was appointed Governor of US Virgin Islands in 1954.
ADDRESS: extending north from the Thomas Jefferson Memorial MAP

Blair House
DESCRIPTION: This historic dwelling was constructed in 1824. In 1836, Francis Preston Blair Sr., a member of Andrew Jackson’s “Kitchen Cabinet” purchased the house. When they moved to a Maryland country house in the 1840s, the Blairs rented it to many notable tenants because it was so close to the White House. In 1852, the Blairs moved back. Montgomery Blair, son of Francis Preston, became a trusted advisor to President Lincoln before and during the Civil War. Montgomery was instrumental in forming the free soil (Non-Slave State) movement within the Republican Party and in keeping Maryland out of the Confederacy. This National Historic Landmark now serves as the official guesthouse of the President. The Obama Family stayed here shortly before the 2009 Presidential Inauguration.
ADDRESS: 1651-1653 Pennsylvania Ave NW, Washington, DC MAP
RAPID TRANSIT: Farragut West Metro Station

Duke Ellington Residence
DESCRIPTION: Duke Ellington (1899-1974) began studying piano at age 7 here. He has influenced by Eubie Blake and Fats Waller while in his teens. This world renown musician, composer and self-taught arranger made his professional debut at age 17 in Washington DC. He received every honor one can bestow on a musical genius, including the title of one of America’s greatest composers. The home is not open to public.
ADDRESS: 1212 T Street NW, Washington, DC MAP
RAPID TRANSIT: U Street Metro Station

Howard Theatre
DESCRIPTION: Built in 1910, it was one of the first legitimate Black theaters. Tt joined the likes of the Apollo Theatre in New York, Royal Theatre in Baltimore, and the Regal Theatre in Chicago on the national Chitlin’ Circuit for like Pearl Bailey, Duke Ellington, Marvin Gaye, and others. The home is not open to public.
ADDRESS: 624 T Street NW, Washington, DC MAP
RAPID TRANSIT: Shaw Metro Station

Mary Church Terrell Residence
DESCRIPTION: Terrell (1863-1954) was a less celebrated civil rights warrior with a sparkling resume. She taught at the famous M Street high school and became the first president of the National Association of Negro Women in 1896. She was a renown public speaker for women’s suffrage. She filed the case which led the U.S. Supreme Court to desegregate public places in 1953. The home is not open to public.
ADDRESS: 326 T Street NW, Washington, DC MAP
RAPID TRANSIT: Shaw Metro Station

Dunbar Hotel
DESCRIPTION: Named for Paul Laurence Dunbar, this 6-story building was originally built in 1897 as an apartment house for white residents. As Dunbar Hotel, it became the traveling home for black dignitaries, performing artists, and professional athletes. Like the nearby Whitelaw Hotel, the Dunbar’s guests included public figures and major entertainers appearing in the theaters along U Street. By the late 1950s, Downtown began desegregating and the Dunbar Hotel lost its traditional clientele. today the building houses a bank.
ADDRESS: 15th Street at U Streets NW, Washington, DC MAP
RAPID TRANSIT: U Street Metro Station

Carter G. Woodson Residence
DESCRIPTION: Woodson (1875-1950) originated Black History Week, which was later expanded to a month in 1976. He was largely, a self-taught youth who rose from the coal mines to earn a Doctorate in History from Harvard. He became an outspoken advocate to recognize the contributions of African-Americans in history books. Woodson founded the Association for the Study of Negro Life and History in Washington DC. This home is not open to public.
ADDRESS: 1538 9th Street, NW, Washington, DC MAP
RAPID TRANSIT: Shaw Metro Station
WEBSITE: link

Senator Edward Brooke Residence
DESCRIPTION: Born 1919 and raised here, Brooke received the military’s Bronze Star. He was elected Attorney General of Massachusetts. He is famous for becoming the first African American elected by popular vote to the U.S. Senate, where he served from 1966-1978. The home is not open to public.
ADDRESS: 1938 3rd Street NW, Washington, DC MAP
RAPID TRANSIT: Shaw Metro Station

Anthony Bowen YMCA
Bowen purchased his freedom from slavery in 1853. He convinced YMCA leadership to open a branch for African-Americans. As a Patent Office Clerk in 1867, he helped influence Congress to build a public school for African-Americans. This site was built in 1912, after a massive interracial fundraising effort in Bowen’s honor. The architect was William S. Pittman. It is now a family and youth fitness center with a swimming pool.
ADDRESS: 1816 12th Street, NW, Washington, DC MAP
PHONE: 202-462-1054
RAPID TRANSIT: U Street Metro Station

George Bell’s School Site
DESCRIPTION: Founded in 1807, Bell and two colleagues who worked at the Washington Navy Yard, built the first school to educate African-American youth. To reduce the chances of a racist attack on the school, he posted an ad in a white newspaper to indicate that no writings would be taught to slaves.
ADDRESS: 3rd and D Streets SE, Washington, DC MAP
RAPID TRANSIT: Capitol South Metro Station

Capital Savings Bank Site
DESCRIPTION: Located on the site of the Verizon Center for sports, stood the first privately owned African-American Bank founded in 1888. Although the site was given National Historic Landmark status in 1975. This bank was a particularly important institution during the Reconstruction Era, since it helped many businesses and property owners until it closed in 1902.
ADDRESS: formerly located at 609 F Street NW, Washington, DC MAP
RAPID TRANSIT: Gallery Place-Chinatown Metro Station

Frederick Douglass Cedar Hill Residence
DESCRIPTION: This National Historic Site is dedicated to the Father of the Civil Rights Movement (1818-1895). Self-educated, accomplished orator, and author for the Abolition Cause, Douglass counseled President Lincoln and urged African-Americans to join the Union Army the Civil War fight to end slavery. After the Civil War, he helped many men of color obtain citizenship and the right to vote. In 1877, he purchased this house on Cedar Hill, which has his original furnishings. Douglass was appointed U.S. Marshal for DC, DC Recorder of Deeds and U.S. Minister to Haiti. The adjacent visitor’s center features a documentary film on his life.
ADDRESS: 1411 W Street SEAfrican-Americans MAP
RAPID TRANSIT: Anacostia Metro Station
PHONE: 202-426-5960