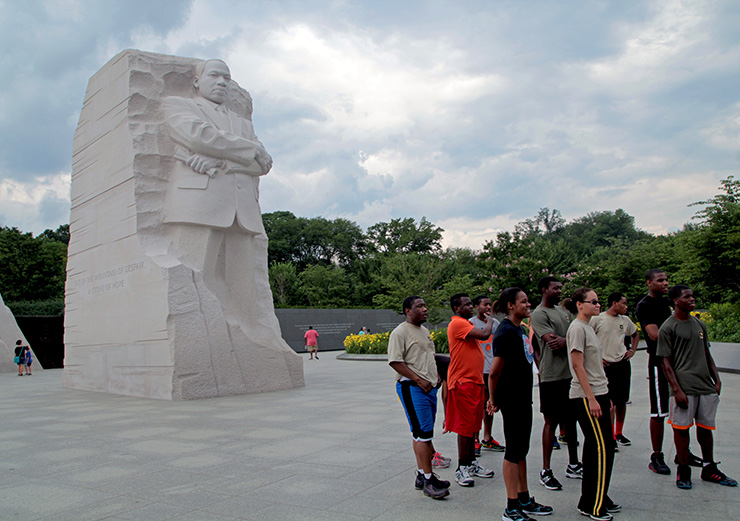 History
Benjamin Banneker, was previously introduced to and won L’Enfant’s confidence to assist him on the landscape design of DC. A brilliant astronomer, mathematician, author and inventor, Banneker completed the L’Enfant … More

Churches
Washington DC is known for historic and iconic black churches from Georgetown to to U Street to Anacostia. Count yourself blessed when time permits you to visit them during your travels… More

Spas and Innkeepers
DC has a feast of black-owned spas to refresh your mind, body and spirit. The innkeepers are top notch … More

National Monuments
DC is a must visit, if only to see the many astounding national monuments and museums. Martin Luther King, Jr. Memorial joins them with a remarkable presence along the Tidal Basin … More

The Arts
Even lifelong residents find it impossible to see every Smithsonian Museum and the many other museums that are not, so its best to have a game plan for your museum visits … More

Abolitionist and Civil Rights Movements
One writer describes the early District of Columbia as a slave emporium. simultaneously, DC was a center of abolitionist activity led by free persons of color … More

Family Attractions
With National Air & Space Museum as the world’s most visited museum, an encyclopedic National Museum of Natural History, tons of events at Verizon Center and the magnificent National Zoo … More

General Attractions
Georgetown, a historically Black district that evolved into a premier village in the nation’s capital known for its charm and human scale; while Adams Morgan is DC’s hottest district for funky shops and … More

Obama Presidential Inauguration
On 20 January 2013, Barack Obama was re-inaugurated America’s 44th President, a feat that few could have foretold when he began his miraculous campaign journey 6 years earlier … More

U Street – Shaw District
Shaw District was a military camp during the Civil War forslaves escaping from the South. The camp developed into a neighborhood named in honor of Robert Gould Shaw, the white officer who led the Massachusetts 54th … More

Tiger Woods AT&T Tournament
A time capsule look at Tiger Woods when he sat atop the golf world in June 2009. As tournament host, new father, owner of a $110 million conglomerate, and head of a foundation, he beat the best golfers in the world … More

March On Washington
A pivotal moment in the Civil Rights Movement occurred on 28 August 1963 at the Lincoln Memorial when 250,000 people came to together to demand that our nation to live up to the ideals that founded our country … More

From Marches To Black Mayors
Washington DC has a decades old reputation for civil rights marches. It has translated some of those marches to black mayors who made a difference in redevelopment of this capital city. No mayor has been more influential in DC redevelopment than controversial Marion Barry. … More

National Museum of African American History & Culture: Opening Day
A short NMAAHC Opening Day story whose authentic similarity will speak to many parents and grandparents today and for generations to come … More

Trivia and Famous Residents
With over 1.4 million African-Americans and distinguished Howard University in its backyard, Washington DC has produced a wealth of famous residents, including Mary McLeod Bethune, Frederick Douglass, Ron Brown … More