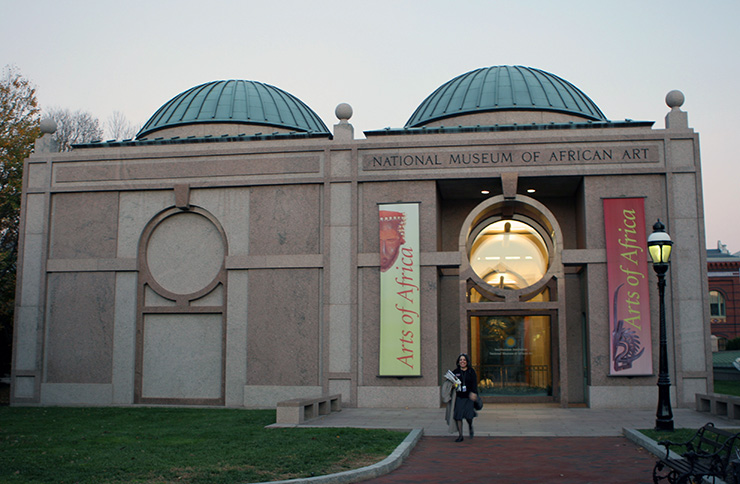 Arts & Industries Building
DESCRIPTION: Often called the “Smithsonian Building” because it was the first structure built for what has become a museum empire. Though it also features changing exhibitions, today it mostly offers children’s performances and functions as a Visitor Information Center. You must check out the Enid Haupt Garden on the Independence Avenue (south) side of the building. Its a masterpiece in landscape design.
ADMISSION: free
DAYS & HOURS: daily 10a-5:30p
ADDRESS: 900 Jefferson Drive SW, Washington, DC MAP
PARKING: limited parking on street
RAPID TRANSIT: Smithsonian Metro Station
PHONE: 202-357-2700
WEBSITE: http://www.si.edu/ai

National Gallery of Art
DESCRIPTION: Opened in 1941, the initial paintings and works of sculpture were given by Andrew Mellon to formed a high quality nucleus of art around which the collections have grown. He attracted gifts from others to assemble an astounding collection of European and American paintings, sculpture, works on paper, photographs, decorative arts plus other changing exhibitions of art from around the world.
ADMISSION: free
DAYS & HOURS: daily 10a-5:30p; extended summer hours
ADDRESS: 6th Street & Constitution Avenue NW, Washington, DC MAP
PARKING: limited parking on street
RAPID TRANSIT: Archives-Navy Memorial-Penn Quarter Metro Station
PHONE: 202-737-4215
WEBSITE: http://www.nga.gov

Renwick Gallery
DESCRIPTION: A Smithsonian Institution and National Historic Landmark, was designed by James Renwick Jr., the same architect who designed the Smithsonian Building, and erected between 1859 and 1861 by William Wilson Corcoran as an gallery for his collection of paintings and sculpture. During the Civil War, the gallery was seized by the U.S. Army for use as a storage warehouse by the Quarter Master. After the Civil War, control of the gallery was returned to Corcoran, restored over several years and opened to the public in 1874. The collection outgrew its building and in 1897, moved to a larger building on 17th Street where it remains today. In 1965, the Secretary of the Smithsonian requested that the building be turned over to the Smithsonian for use as a gallery of art, crafts and design. After another restoration to Smithsonian standards, the building reopened as the Renwick Gallery in 1972.
ADMISSION: free
DAYS & HOURS: daily 11:30a-7p
ADDRESS: 17 Street and Pennsylvania Avenue NW, Washington, DC MAP
PARKING: garages nearby
RAPID TRANSIT: Farragut West Metro Station
PHONE: 202-633-7970
WEBSITE: http://americanart.si.edu/renwick

Kennedy Center for the Performing Arts
DESCRIPTION: Since opening in 1971 on the banks of the Potomac River, the nation’s performing arts center has delivered some of the greatest performers and performances in America. Although creation of the center was authorized by President Dwight Eisenhower in 1958, the center functions as a living memorial to our slain president John Fitzgerald Kennedy. JFK was a lifelong supporter and advocate of the arts – his assassination on 22 November 1963 swiftly attracted federal money, foreign donations and private donations to the partnership that produced this architecturally-stunning and crystal-laden venue. Its opening in 1971, triggered DC’s rapid ascent to world performing arts destination. Aside from the Grand Foyer featuring an over-sized bust of JFK, the East Terrace overlooking the Potomac River is a favorite event gathering place. Renovated in 1997, the 2,442-seat Concert Hall is superb for large musical productions. The 2,300-seat Opera House designed for ballet, opera and musical theater has hosted its share of world renown performances. The 1,100-seat Eisenhower Theater hosts smaller plays, operas, ballet and contemporary dance. Separating the three large theatres are the flag-draped Hall of States and Hall of Nations. The 513-seat Terrace Theater was a Bicentennial gift from the people of Japan. It is intended for intimate performances of chamber music, ballet and contemporary dance, theater, and family performances. The 324-seat Family Theater provides a home for world-class family theater performances. A small on-site library was recommissioned as the Kennedy Center Jazz Club. One of several lounges on site, the African Lounge, donated to the Kennedy Center by the nations of Africa to evoke the feeling of being in an African village. The center has programs for funding new American plays, plays-in-progress for young audiences, an American College Theatre Festival and a wellspring of arts education programs. Some free performances are provided at 6p daily. The center conducts free tours of the venue.
BOX OFFICE: Mon–Sat 10a–9p, Sundays and holidays Noon–9p
ADDRESS: 2700 F Street, NW, Washington, DC MAP
PARKING: garage on premises
RAPID TRANSIT: Foggy Bottom-GWU Metro Station, then catch the free shuttle to JFK Center
PHONE: 202-467-4600
WEBSITE: http://www.kennedy-center.org

National Theatre
DESCRIPTION: For its relatively unassuming exterior, given its next to the White House, you’d never guess that DC showcases traveling Broadway plays if the marquee didn’t give it away. The theatre is a welcome addition to nightlife in this part of Downtown.
BOX OFFICE: Mon-Sat 10a-9p, Sunday and holidays Noon-8p
ADDRESS: 1321 Pennsylvania Avenue NW, Washington, DC MAP
PARKING: garage nearby
RAPID TRANSIT: Metro Center Metro Station and Federal Triangle Metro Station
PHONE: 202-628-6161
WEBSITE: http://www.nationaltheatre.org

Arena Stage
DESCRIPTION: This flagship theater is the first regional theater to transfer a production to Broadway and the first to receive a Tony Award. They have practiced groundbreaking programs and diversity in all aspects of theater. Aside from introducing new plays, its common to see them debut The Great White Hope to The Women of Brewster Place to Ella, interspersed with Death of A Salesman and other American classic plays.
BOX OFFICE: Mon—Sat 10a—8p, Sun 10a—8p; also at Washington Post on 1150 15th Street NW beginning at 8:30a
ADDRESS: 1101 Sixth Street SW, Washington, DC MAP
PARKING: garage on premises
RAPID TRANSIT: Waterfront-SEU Metro Station
PHONE: 202-488-3300
WEBSITE: http://www.arenastage.org

Carter Barron Amphitheatre
DESCRIPTION: Original amphitheatre plan in 1943 called for benches to seat 1,500 and a stage equipped with a movie screen. The plan was expanded by Carter Barron in 1947, as a way to memorialize the 150th Anniversary of Washington DC as the nation’s capitol. As Vice Chairman of the Sesquicentennial Commission for Rock Creek Park, Barron envisioned an amphitheatre where all persons of every race, color and creed could attend musical, ballet, theater and other performing arts productions. He succeeded in 1950.
DAYS & HOURS: open in warm months
BOX OFFICE: Noon–8p
ADDRESS: 4850 Colorado Avenue NW, Washington, DC MAP
PARKING: garage on premises
RAPID TRANSIT: none
PHONE: 202-397-7328
WEBSITE: http://www.nps.gov/rocr/planyourvisit/cbarron.htm