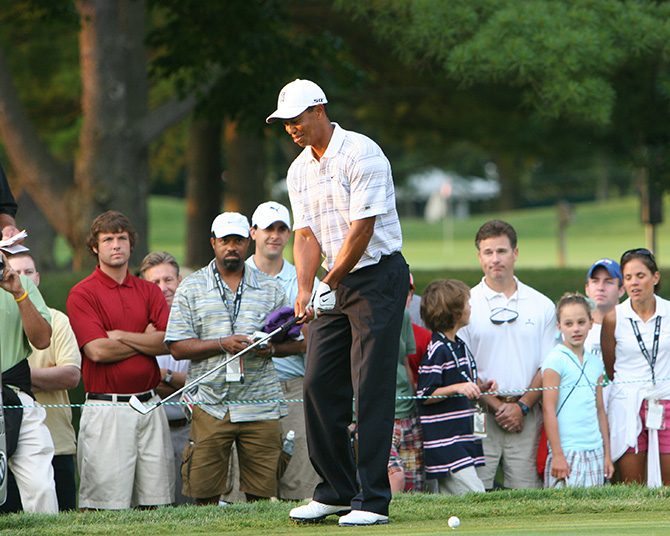 After watching Tiger’s performance one weekend in June 2009, I am now more convinced than ever that he is a man among boys as these professionals play the game of golf. There he is, tournament host, new father, fairly new husband, owner of a $110 million dollar conglomerate, and head of a major foundation, that happend to have a board meeting in the middle of the tournament, and he still manages to beat the best golfers in the world. They gotta be frustrated out of their minds. But give them credit. They keep coming back for more.

While he sometimes errs, I find that Tiger often plays possum to keep the score close and the match interesting. Patrons get bored with blow-outs and soon head for the exits when one is in progress. In the end, he does just enough to win a tournament. Tiger is like a pool shark that does just enough to make suckers think they have a chance. He “keeps hope alive” and the paying public coming back for more. His doubters can cheer the opposition, while harboring fears of another tiger Woods win. His mother knows. She recently bragged that her son “wills the ball into the hole.” If the PGA organizers were as smart as they think they are, they would insist on a handicap of at least 5 for Woods.

Personally, I like blow-outs. John Thompson’s former basketball teams were more to my liking. Beat them by twenty boys and let their heads hang down. Heaven help you if I get you down.

Here’s a case in point on last day of the ATT tournament. Tiger is matched with Anthony Kim, winner of last years tournament and anticipated successor to an older, less capable Tiger. The “boy can play” as we say in the hood. Kim had shot a 62 earlier in the week, setting a new record for this Congressional Blue Course. However, by the time we get to Hole 16, the trumpeted match-up between Kim and Tiger fizzled as the youngster was down by 3 and out of the match.

A new competitor however, came out of nowhere. H. Mahan shot a 62 earlier on this day and was even with Tiger Woods. Tiger had to birdie the 16th to go one up and maintain par for the final three holes to win the tournament. Tiger was a long 20 feet away from the hole. And frankly, he seemed distracted and uncomfortable with his play on the course. Very close misses on the greens will do that to everyone.

Tiger knew he was even with Mahan and had to sink that putt to go up by one or risk a play-off and possible loss. Mahan actually headed for the practice greens to warm-up as Tiger seemed to falter. What does Tiger do? He steps up, silences a photographer making noises with his camera, and sinks the 20-footer like it was written in a movie script. He then proceeds to make par on the last two holes to win the tournament. What a golfer!

I wish I was as good at anything as Tiger is at golf. I should be a minor member of a throng of other sport writers, who are of mostly European descent. These sportscasters should be a throng praising Tiger’s unprecidented mastery of golf. They would invent new adjectives of praise. Sadly, this is not true, Tiger is somewhat damned by faint praise. I do believe this would not be the case if Tiger’s parents hailed exclusively from Europe. There now, yes I said it and only because it is true. The kids of all parentage adore him for the titan he is and are unrestrained in their adulation and praise.

Many old foggies, on the other hand, are silently hoping for a return of the good ole days of “White Only” professional golf. I do not resent them for this. I kind of feel sorry for them. Golf is the latest in a long line of sports that have come to be dominated by performers of color.

I sense that they are not that comfortable with “their” game being manhandled by a bronze-toned Man who handles the best of them like a kid with a toy. Even a hero like Anthony Kim will serve if he, like Frazier to Ali, can knock Tiger off his throne. The fact that Tiger can maintain a comfortable demeanor, while this is going on under the radar, is testament to his training and maturity.

Me, I just admire perfection, or as close as one can get to it. Michael Jackson performing on stage, Michael Jordan on a basketball court, Muhammad Ali in the boxing ring, Gunter Gable Williams petting tigers and lions in the ring … You catch my drift. These are once in a lifetime gifts from the Creator to entertain us.

So step up boys and girls and enjoy the show while you can, for we will not soon see Tiger’s like on a golf course again.