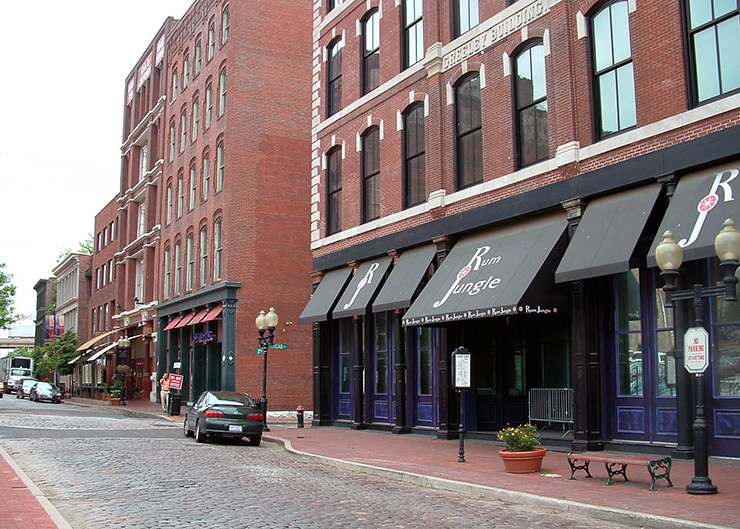 Clamorgan’s Alley
DESCRIPTION: When West Indian Jacques Clamorgan arrived in the 1780s, he was the first person of African descent to settle in St Louis. An explorer, fur trader, and merchant, he owned several properties in the cobble-stoned streets of Laclede’s Alley. Today, the alley is named in his honor. nearby, the bridge traverses the mighty Mississippi River was renamed to honor Dr Martin Luther King, Jr.
DAYS & HOURS: daily
ADMISSION: Free
ADDRESS: Clamorgan’s Alley in LaClede’s Landing, St. Louis, MO MAP

Old Courthouse
DESCRIPTION: One of America’s most important historic sites because of the role it played in leading the country to Civil War. In 1847, it hosted the first Dred Scott trial whose outcome pitted slave state law and economics against free state law and economics. Dred Scott was born a slave and moved to St Louis in 1830, eventually Scott accompanied his owners to the free states of Illinois and Wisconsin. After returning to St Louis and the death of one of his owners. Scott and his wife successfully sued his owner’s widow for their freedom on the basis that traveling to a free state made them free. Although later cases went against Scott, he is immortalized for his heroic stand in a slave state prior to the Civil War. Scott, who was freed by a new owner, died in St. Louis in 1858. The last slave auction in St. Louis occurred on the Courthouse steps in 1861. It ended as an anti-slavery protest by 2,000 people. Today, this popular visitor attraction features restored courtrooms, exhibit rooms on St. Louis history, a beautifully decorated dome, and recreations of the Dred Scott trial throughout the year.
DAYS & HOURS: Tours Mon-Fri 9a-4:30p
ADMISSION: Free ranger tours available
ADDRESS: 11 North Fourth Street, St. Louis, MO MAP
PHONE: 877-982-1410
WEBSITE: http://www.nps.gov/jeff

Scott Joplin House
DESCRIPTION: The famous ragtime composer lived in this house from 1901 to 1903. While here he completed such famous works as “Lost Opera”, “The Entertainer” made famous in the movie “The Sting”, and “A Guest of Honor”. During his stay in St Louis, Joplin catapulted to international stature. This historic landmark since 1976 was restored in 1991 to preserve and interpret Joplin’s work. You can hear his compositions on the player-less piano.
DAYS & HOURS: Nov-March 10a-4p Tue-Sat and Apr-Oct 10a-4p Mon-Sat
ADMISSION: $2.50 adults, $1.50 for kids 6-12yrs old
ADDRESS: 2658 Delmar Blvd, St. Louis, MO MAP
PHONE: 314-533-1003 and 314-340-5790
WEBSITE: http://www.mostateparks.com/scottjoplin.htm

Homer G. Phillips Hospital
DESCRIPTION: On grounds the size of small college campus, this massive structure is still a treat for the eyes. Nearly 3,000 bystanders witnessed its dedication in 1937 for the “care of indigent Negroes”. He trained a large number of African American doctors and nurses throughout the nation. It closed in 1979 in an attempt to integrate city owned hospitals and was named for an African American attorney who led the battle for a public bond to fund the hospital’s construction. Designed by Albert A Osberg and placed on the National Register of Historic Places since 1982. Restored today, it houses the elderly.
ADDRESS: 2601 Whittier Street, St. Louis, MO MAP

Bellefontaine Cemetery
DESCRIPTION: Gravesites of Rev. John Berry Meachum, founder of the First African Baptist Church and the “freedom school” on the Mississippi River, and the Reverend John Richard Anderson, a witness to the 1837 murder of the Reverend Elijah P. Lovejoy, an abolitionist newspaper publisher. Maps and self-guided tours are at the cemetery office.
ADDRESS: 4947 West Florissant Avenue, Florissant, MO MAP
PHONE: 314-384-0750

Calvary Cemetery
DESCRIPTION: Catholic cemetery established in 1857 and final resting spots of Dred Scott, the former slave whose suit for freedom at the Old Courthouse brought him national renown and was a crucial element in the beginning of the Civil War; and Madame Pelagie Rutgers, an African-American woman who grew to become one of the St. Louis’ wealthiest landholders in the mid-18th century
ADDRESS: 5239 West Florissant Ave  MAP
PHONE: 314-381-1313

Jefferson Barracks National Cemetery
DESCRIPTION: From a bluff overlooking the Mississippi River one perches on the fourth largest cemetery in the US. It includes graves for over 1,000 members of the 56th Colored Infantry established in St. Louis in 1863.
ADDRESS: 101 Memorial Drive, South of St. Louis MAP
PHONE: 314-263-8691

James ‘Cool Papa’ Bell Memorial
DESCRIPTION: Final resting place for to the baseball Hall of Famer who played in the Negro National Major League from 1922 to 1950. He was an outstanding infielder and base stealer. They say Cool Papa was so fast, he could hit the light switch and be in bed before the light went out. He was in fact, so fast that he was timed rounding the bases in an astonishing 11 seconds.
ADDRESS: 2101 Lucas-Hunt Road in St. Peters Cemetery, Velda Village, MO MAP