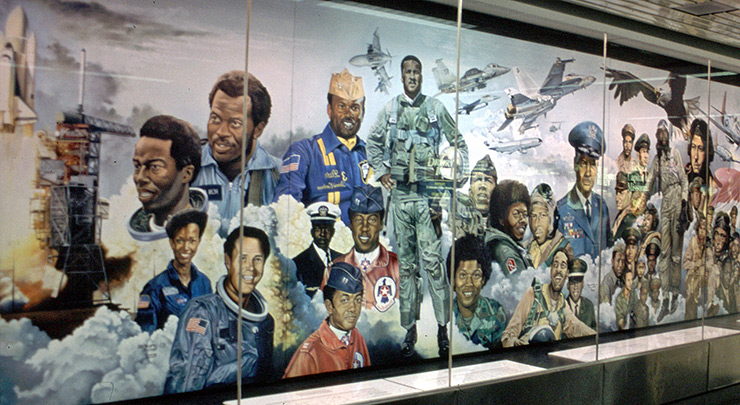 Restaurants
Bespeaking its Midwest location, this Foodie city enjoys a range of Soul Food and Barbecue restaurants. Its location astride the Mississippi River also made it a prime home for Jazz, Blues and now Hip-Hop nightclubs … More

General Attractions
At 630 feet tall by 630 feet wide, Gateway Arch is the nation’s tallest man-made monument; ride the Journey to the Top tram from its base to its highest point. From there, view the Mississippi River, LaCledes Landing … More

Historic Sites
The city by the river has many historic sites from slavery, to Civil War to freedom, including some established by people of color … More

St. Louis Gives Birth to R&B
With cross-ferticlation and evolution from Ragtime, Blues, Jazz and Bloogie-Woogie, the city arguably lays claim as the birthplace of R&B, though it was first recorded undercover in Memphis for crossover appeal to whites … More

The Ville
When elder Black folks talk of St. Louis, they remember the area bounded by Taylor Avenue, St. Louis Avenue, Sarah Street and what is today called Martin Luther King Drive. To them it will always be The Ville … More

Barbecue and Soul Food
The city has earned many accolades for its Black-owned Soul Food and Barbecue restaurants, many of whom have secret family recipes for everything from gravy-smothered ribs, steak, pork chops and chicken, to tender … More

Scott Joplin and Ragtime
St. Louis is the northern axis of America’s Musical Corridor, which runs along the Mississippi River linking St. Louis, Memphis, Natchez and New Orleans. This melodic corridor has given birth to most genres of American music … More

Katherine Dunham
Dancer, choreographer, teacher, activist, anthropologist, artist and author. Some hail her as a scholar and dance icon of stage and screen. … More

From Josephine Baker to Nelly
A couple of years after Joplin’s world-renown composition made its debut at the World’s Fair, a young girl by the name of Freda Josephine McDonald was born here. A professional dancer and singer … More

Alton
Only a short ride away from St. Louis, Alton has a number of attractions that have have general and family appeal for day trips … More