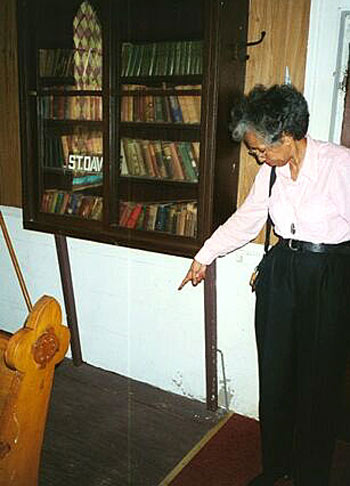 Eastville Heritage House
DESCRIPTION: Formerly this 1-story home was purchased through a catalog in 1925 by Lippman Johnson, an African American worker, and his wife Rose, and their descendants lived in the home until the mid-1980s. Later falling into disrepair, it was obtained by the Village of Sag Harbor in 1996 for use by the Eastville Community Historical Society. The grand opening of the museum featured a quilt exhibition from Amistad America; hosts the Society’s collection of letters, journals, photographs, household goods, furniture and other artifacts dating from the 1800s for this site on the National Register for Historical Places. Its the site of the big annual Fish Fry on July 25th.
ADMISSION: $3 adults, 1 kids
DAYS & HOURS: July-August, Sat-Sun 2p-5p and during special exhibits
ADDRESS: 139 Hampton Street, Sag Harbor, NY MAP
PHONE: 631-725-3713
WEBSITE: none

St. David AME Zion Church
DESCRIPTION: Built in 1839 by members of the First Presbyterian (Whalers) Church in Eastville. The first pastor, Rev. J.P. Thompson, was a known abolitionist who worked with the large Quaker community and others in Sag Harbor to facilitate the escape of slaves who were hidden beneath the pews via a trap door under the main sanctuary. As a result, St. David’s became a stop on the Underground Railroad and it is now the oldest church in Sag Harbor still on its original site.
DAYS & HOURS: tours by appt
ADDRESS: Eastville Avenue at Hampton Street, Sag Harbor, NY MAP
PHONE: 631-725-1445
WEBSITE: none