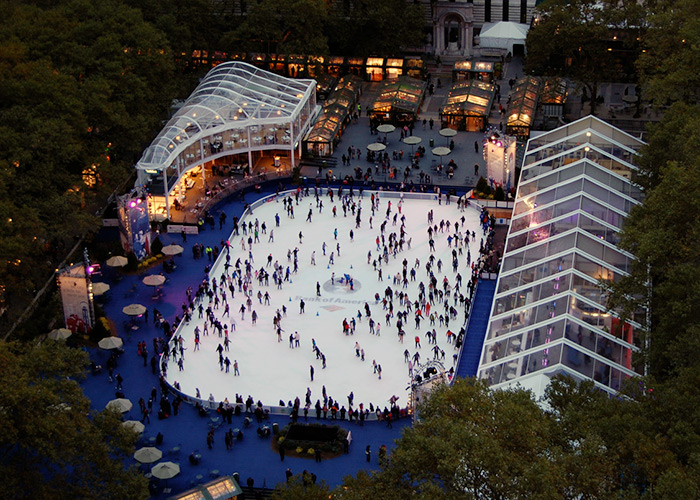 Radio City Music Hall
DESCRIPTION: America’s music hall features three mezzanines over its orchestra seating and excellent views from each seat; staying hip with the times, they feature the latest Neo Soul and Hip-Hop stars. Every winter holiday season there’s the Rockettes, who debuted at Radio City’s opening night in December 1932, have given continuous performances ever since. In many ways, the post modern architecture of the music hall is the real star, its expensive restoration completed, a tour lets you absorb all of its the opulence and get the backstory on the events here will make your jaw drop.
ADMISSION: $$
DAYS & HOURS: Mon-Sun 11a–3p
ADDRESS: 1260 Sixth Avenue, New York, NY MAP
RAPID TRANSIT: B, D, F, V lines
PHONE: 212-247-4777
WEBSITE: http://www.radiocity.com

Empire State Building
DESCRIPTION: Since its opening in 1931, nearly 110 million visitors have ascended to the top. This civil engineering marvel and National Historic Landmark can arguably claim to be the most famous structure by modern man. It was built on the site of the original Waldorf-Astoria Hotel. It was built in the height of the Great Depression and still it cost $41 million. Though has its 102 stories and a height of 1250 feet, the foundation set in bedrock only descends to 55 feet, which is kind of weird when you think of it. The lobby is another of New York’s art deco masterpieces. All bags are subject to search before traveling to the 86th Floor observatory. 102nd Floor Observatory tickets are only sold upon arrival at the Empire State Building for $15 in addition to regular admission tickets. Christmas is a favorite time to visit with the special lighting.
ADMISSION: Express Pass $$; Military and Age 5 or younger enter Free
DAYS & HOURS: daily 8a-2a; last elevators go up at 1:15a
ADDRESS: 350 Fifth Avenue, New York, NY MAP
RAPID TRANSIT: D, F, N, Q, R, V, W lines and New Jersey Transit trains
PHONE: 212-736-3100 or 877-NYC-VIEW
WEBSITE: http://www.esbnyc.com/tourism

Intrepid Sea, Air & Space Museum
DESCRIPTION: One of the most successful ships in US History and a national historic landmark; In 1943, the USS Intrepid aircraft carrier served in World War II through Vietnam; today the museum features a range of interactive exhibits that cover the heroism of our armed forces; since 1974, the decommissioned Intrepid became a memorial to honor our heroes and educate the public. In 1982, it opened as a museum in NYC waterfront. Ride in the A-6 Cockpit Simulator, visit the Virtual Flight Zone, and dozens of planes that fought in wars. The most spectacular is the ability to tour the inside the world’s fastest commercial jet, the Concorde which flew up to 1,350 mph at 60,000 feet – high enough to see the curvature of the earth.
ADMISSION: $$
DAYS & HOURS: Tue-Sun 10a-5p
ADDRESS: Pier 86, West 46th Street and Twelfth Avenue MAP
RAPID TRANSIT: near Port Authority Bus Terminal and A, C, E lines
PHONE: 212-245-0072
WEBSITE: http://www.intrepidmuseum.org

American Museum of Natural History
DESCRIPTION: Opened in 1869, today it is one of America’s great museums; features five floor levels of permanent exhibits in Fossil Halls, Rose Center, Culture Halls, Mammals Halls, Biodiversity, and more in its. The visiting exhibits are also legend – like the Darwin exhibit; the museum is well-known for honoring all cultures with special exhibits, plus science programs for kids and the Discover Room for K-2 kids. Admission fees vary depending on whether you include an IMAX show and take advantage of their SuperSaver package. Better yet, get a City Pass for the best deal. Discovery Tours conducts expeditions throughout the world.
ADMISSION: $$
DAYS & HOURS: daily 10a–5:45p; IMAX Space Show every half-hour 10:30a–4:30p
ADDRESS: Central Park West at 79th Street, New York, NY MAP
RAPID TRANSIT: B, C lines
PHONE: 212-769-5200 and 212-769-5700
WEBSITE: http://www.amnh.org

St. Nicholas Park
This is a popular linear park for families to picnic and a fantastic place to play and watch some of the best basketball in Harlem.
ADDRESS: bounded by St. Nicholas Place, 141st street, and 127th street, New York, NY MAP

Bryant Park
Lush landscaping, gravel paths, green chairs, a carousel and throngs of people speak to its rebirth over a long history since 1842. The park has not always been so lovely. By 1979, it was the site of frequent muggings and drug deals. In 1980, a non-profit corporation was set-up to transform the park and its reputation. The results are spectacular.
ADDRESS: behind NY Public Library on 42nd Street, New York, NY MAP
WEBSITE: http://www.bryantpark.org

Bronx Zoo
DESCRIPTION: Flagship of the largest network of metropolitan zoos in the country, the 265-acre Bronx Zoo is the heart of the Wildlife Conservation Society and its work to save wildlife around the globe. Features award-winning, innovative exhibits with superb viewing for more than 4,000 animals. See Western lowland gorillas at Congo Gorilla Forest and an indoor Asian Rain Forest, just two of their our outstanding naturalistic habitats for some of the world’s most amazing wildlife. Every zoo admission fees supports conservation by more expert researchers in the field than any other zoo.
ADMISSION: $$; Wednesday Pay-as-you-wish donation; extra fees for Children’s Zoo, Skyfari, Zoo Shuttle, Butterfly Garden, Monorail and Camel rides
DAYS & HOURS: Mon-Fri 10a-5p, Sat-Sun 10a-5:30p
ADDRESS: 2300 Southern Blvd, Bronx, NY MAP
RAPID TRANSIT: 2, 5 lines
PHONE: 718-220-5100
WEBSITE: http://bronxzoo.com