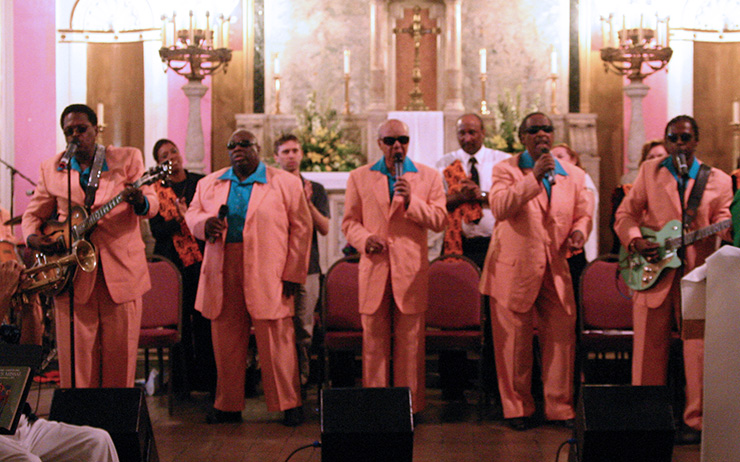 New Orleans Gospel music not named as such in its beginnings as a cappella expression. It was derived from African-American experience and traditions toiling on the rural fields of slave plantations.

Though Gospel music on southern plantations was not recorded in the 1900s , it is widely understood that the music genre began there. By the early 20th century, economic opportunity grew enough to support a number of Gospel groups in New Orleans. They generally consisted of small 3 to 4 person quartets and choirs heard in storefront chapels and spirit-filled churches all over town.

Although the vernacular of Gospel music in rural areas of the South incorporated tambourine, drum, trumpet, and saxophone accompaniment, instrumental accompaniment was slow to be introduced in New Orleans. Mainstream AME and Black Baptist congregations considered a great deal of musical instrumentation to be taboo — too much like the Devil’s music. This stance was ironic, given that rhythmic movement was very much a part of the stylistic properties and spirit-filled dance in churches. Then Jazz musicians started playing in church.

Drawing from their musical sensibilities and discipline, Jazz musicians introduced slightly richer musical arrangements in 1920s and 1930s, foreshadowing the great shift towards mass choirs having 30 to 40 singers and a full ensemble complement of horns, drums, pianos, organs, guitars and so on. Despite this shift, which became more pronounced after World War II, a cappella stylization and minimum instrumentation still remained popular for some, led by the “Grand Daddies” you might say, of the Gospel sound, The Zion Harmonizers.

Founded in 1939 and named after the small New Orleans community called Zion City, The Zion Harmonizers were early proponents of the mid-20th century style of four-part harmony. In 1942, the group came under the management of Sherman Washington, a much beloved figure in town credited with popularizing Gospel music to the Majority. The group is currently in its 6th decade together, and still performs at various New Orleans venues, including at the famed House Of Blues during Sunday Gospel Brunch.

Today Washington is Director of the famous Gospel Tent at the annual New Orleans Jazz & Heritage Festival, where festival-goers enjoy spirited performances from some 80 Gospel singers and groups like Jai Reed, Miss Emma, the Moses Hogan Sisters, the Joyful Gospel Singers, and Mighty Chariots of Fire—just to name a few.

No discussion of Gospel Music is complete without acknowledging the Queen of Gospel Music, Mahalia Jackson (1911-1972). Born on Water Street in New Orleans, at age 4 Mahalia began singing Gospel at the Plymouth Rock Baptist Church. Her father, Johnny Jackson, was pastor. Though influenced by music styles and performers common to New Orleans daily life (Blues, Ragtime, Jazz), her Gospel influence was unwavering and the most significant throughout life. Thus, Mahalia’s contralto intonation and phrasing are firmly rooted in her New Orleans church upbringing, though at age 16 she moved to Chicago, where she went on to artistic and commercial fame.

Ask your parents and grandparents, if anyone before or since could sing Gospel like Mahalia Jackson. Though a young Aretha Franklin arguably came closest, no one quite measures up to her powerful, sustained, multi-octave voice. Think you’ve heard her voice by listening to a few of her records? Not really. Master recording tapes and records could not capture the dynamic range of her astounding, resonant voice. In fact Dr. Martin Luther King said of Mahalia, “A voice like this comes, not once in a century, but once in a millennium.” She is always remembered, celebrated and hailed as finest vocalist of the genre.