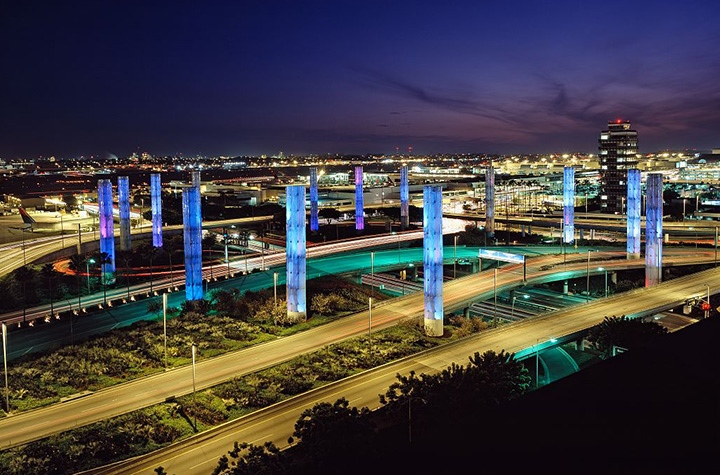 Los Angeles International Airport (LAX), second busiest airport in the nation. It features the most direct flights to Hawaii, Asia, and Australia. Century Blvd leading to the airport is landscaped with palm trees. The entrance has large LAX letters with 100-foot pylons. They alternate to different colors every few minutes and millions of colors throughout the year. If you have a window seat, look for colorful pylons as your plane lands.

The post-modern architecture LAX Tower is often featured in movies. It’s now a USO meeting place. Each terminal hosts an array of gift shops, cafes, lounges, wifi, public art, and passenger amenities. If you have an hour or more between flights, consider visiting the newly updated Tom Bradley International Terminal for its dazzling architecture, It also features a monument to its namesake, Tom Bradley, who served as LA’s first African-American mayor for 20 years. Navigating between terminals is easy, but distant between some terminal pairs. Allow 5-25 minutes walking time between terminals and use the LAX Airport Map.

Taxis depart from the lower airport roadway at each terminal. Taxis, Uber & Lyft depart in an area beside Terminal 1. Shuttle service is provided by Super Shuttle, All American Shuttle, and Airport Express. Until the Automated People Mover opens, shuttles transport you to the offsite Rental Car Center containing Alamo, Avis, Budget, Dollar, Enterprise, Hertz, National, and Thrifty brands. Look for Rental Car Center Shuttle signage on the lower airport roadway, then board from a center passenger island. The Airport Shuttle service to its parking garage is infrequent.

Depending on where you are headed in this metropolis, save up to 1 hour of ground commute time by flying to one of four auxiliary airports. If traveling to San Fernando Valley, look for flights into Burbank Bob Hope Airport (BUR). The airport is served by Jet Blue, Delta, American, United, Southwest, Delta, Alaska Airlines, taxis, shuttles, and car renters. 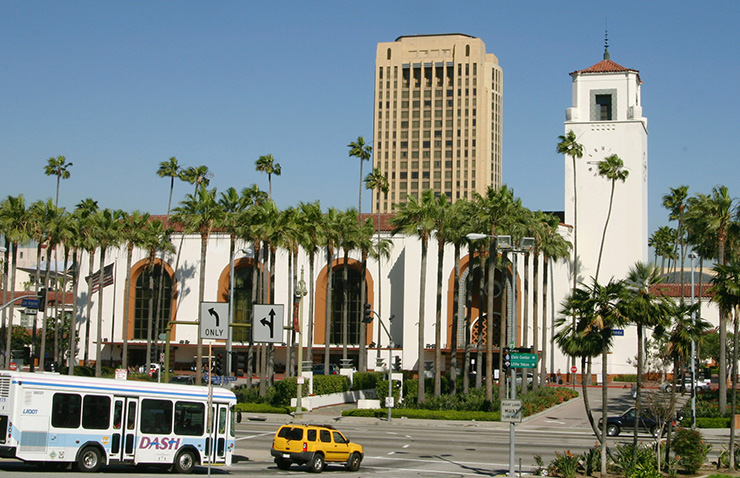 Opened in 1939, Los Angeles Union Station was the last great train station built in America. Featuring Moorish-Spanish architecture and loads of movie appearances, it once hosted 70,000 daily passengers and anchored LA’s nold 450-mile streetcar system. By 1963, transportation hub status was ended by corporate collusion, federal regulations and consumers switching to cars and planes. It was practically a ghost town by Amtrak service began in 1971.

This architectural gem was placed on the National Register of Historic Places in 1980, which saved the station. When Metrorail connected Downtown Los Angeles to Long Beach in 1993 more life returned. By early 2020, the station was hosting 40,000 daily passengers. 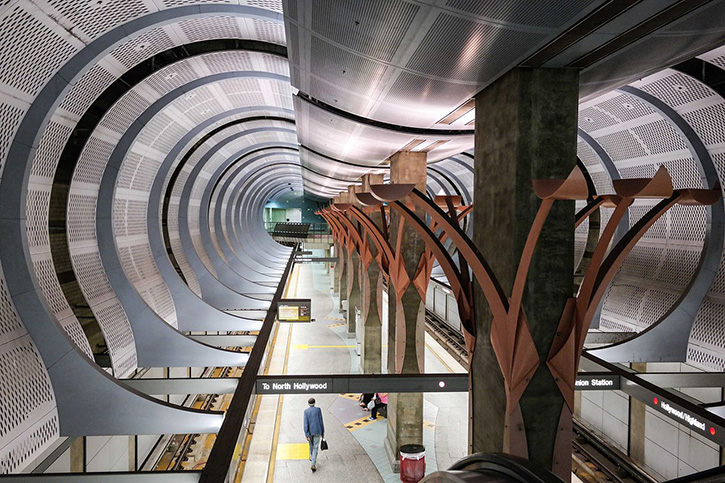 If your hotel is near a Metrorail station, consider purchasing a Metro Day Pass + Taxi/Uber/Lyft rides to avoid considerable driving and parking hassles. Metrorail System Map

In 2023, a Metrorail station opens at 96th Street-Aviation Street, where an Automated People Mover will transport passengers to/from 3 stations within LAX Airport and the Rental Car Center. In 2024, a Metro heavy rail line will extend to Wilshire Museum District and then to Beverly Hills and Century City in 2026.

If you know or think you may get motion sickness, buy and use dramamine 30-60 minutes before any cruise and sit in the rear of the lower deck where motion sensation is reduced.

Catalina Island Cruises from Marina Del Rey
Two 149-passenger ferries make the 90-120 minute cruise to beautiful Catalina Island – only 40 miles southwest. Dolphins like to approach the vessel shortly after the cruise departs – a nice reminder that you are getting away. If you like boating, then enjoy upper deck views with a light jacket, since the Marina Del Rey Flyer, travels up to 30 knots per hour and it gets windy. Snacks, beverages, and mixed drinks are available onboard. Eight passengers can upgrade to the Admiral’s Lounge inside the upper deck for fantastic views. Outbound from Marina Del Rey, the Flyer first stops at Avalon at the southern end of the island, then doubles back to Two Harbors at the northern end of the island.
DAYS & HOURS: seasonal schedule, departures to Avalon is 8:30a some days and 9:15a on others; return departure is at 5p
TICKETS: Book online for a significant discount and you can rent island bikes with them. It is recommended to book Catalina Island hotel and tour packages at the same time as the cruise for more discounts and convenience; they also book non-scheduled group cruises to the island
ADDRESS: Fisherman’s Village, Marina Del Rey MAP
PHONE: 310-305-7250
WEBSITE: http://www.catalinaferries.com

Catalina Island Cruises from San Pedro
During warm months, its popular to cruise to Catalina Island. Highly active travelers go there to hike year round because most of the island is a habitat preserve. So there are rules to protect the wildlife. Boats dock at scenic Avalon Harbor. Get there in 60 minutes aboard Catalina Express; reservations are recommended.
ADDRESS: 95 Berth, San Pedro MAP
PARKING: 2500 secured parking spaces available
PHONE: 310-519-1212
WEBSITE: http://www.catalinaexpress.com

Catalina Island Cruises from Long Beach
Embark at the passenger terminal next to the Queen Mary; from LA take the I-405 Freeway south to the I-710 Freeway south to its end. Stay to the left, follow signs to downtown Long Beach. Look for Queen Mary signs and exit on Golden Shore. Get to Catalina Island in 55 minutes; reservations are recommended.
ADDRESS: 320 Golden Shore, Long Beach  MAP
PARKING: secured parking available
PHONE: 310-519-1212
WEBSITE: http://www.catalinaexpress.com

Starline Tours
Since 1935 these have been the most popular tours of Downtown, Hollywood, Sunset Strip, Beverly Hills, Miracle Mile, Melrose Avenue, Santa Monica, Venice, celebrity homes, movie studios and night tours. Red open-top double-decker buses imported from the UK are used on Hop On-Hop Off routes, but often have recorded guide information. Small shuttle buses are used to tour Movie Star Homes with the driver serving as you guide. Clarify which movie star homes you will see before your tour, since some take different routes. Closed-top vehicles are used when it rains. If you prefer not to drive, they offer a wide range of tour packages to cover the biggest attractions, including a popular 48-hour Hop On-Hop Off Pass.
DAYS & HOURS: daily 9:30a
BOX OFFICE: Starline kiosk in Chinese Theater courtyard; other prices available for tours combined with destinations such Universal Studios, Getty Museum and Disneyland
ADDRESS: 6925 Hollywood Blvd MAP
PHONE: 800-959-3131
WEBSITE: http://www.starlinetours.com

Los Angeles Freeway & Tollway Network is America’s largest when you combine mileage with lanes per mile. It features more carpool lanes, sound walls, modern interchanges, metered entrances and freeway status signs that enable it to carry more autos than any other freeway network in the world. Nevertheless, LA freeways are congested 4-5 hours each weekday morning and another 4-5 hours each weekday evening.

Two HOV lanes were converted to HOT Lanes on I-10 Freeway East of Downtown and the I-110 Freeway South of Downtown. Traffic moves invitingly fast in those HOT Lanes, but requires a FasTrak transponder in your vehicle to automatically deduct a toll when you ride in the lane. If your stay in LA requires multiple business trips on the I-110 Freeway and I-10 Freeway, inquire with your airport rental car agency to rent a FasTrak transponder. Tolls are based on current congestion level and the length of your trip. Orange County features more Tollways than Los Angeles County.

No matter how congested other lanes get on I-10 and I-110 Freeways, do not use HOT Lanes without a FasTrak transponder. High resolution video cameras surveil those lanes 24/7 and the fine is painful.