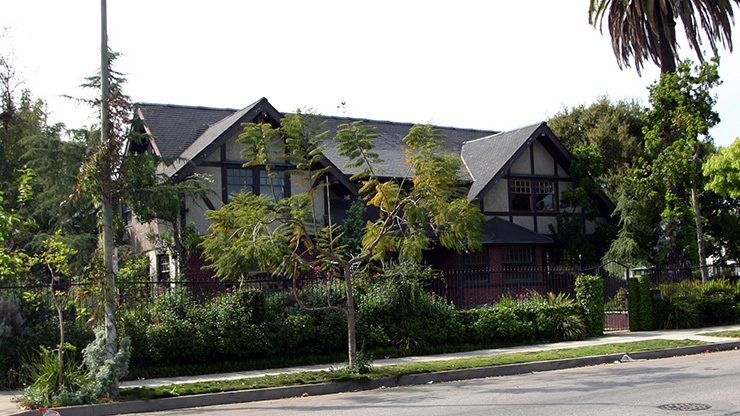 Los Pobladores Monument at El Pueblo Historic Park
DESCRIPTION: A bronze plaque memorializes the people who settled of Los Angeles in the early 1800s; under Spanish rule, the governor of Baja (lower) and Alta (upper) California recruited Pobladores (settlers) from northern Mexico to this site to raise food for soldiers in the nearby forts; the plaque indicates about half of the Pobladores were Negro or Mulatto (Negro and Spanish), with the majority of the remaining being Indian or Mestizo (Indian and Spanish); only two of the Pobladores were Spanish; plaza in front of Olivera Street
ADDRESS: between Los Angeles and Main Streets, Los Angeles, CA MAP
PARKING: paid lots

Biddy Mason Park & Monument
DESCRIPTION: A quiet memorial to Biddy Mason; born a slave in Georgia; walked to California behind a wagon train; fought the court case which won freedom for herself and her daughters in 1856; as a midwife she became wealthy acquiring property throughout Downtown, sometimes in lieu of cash payment; founded First African Methodist Episcopal church in her home at 331 S Spring Street (replaced by an office bldg). An astute businesswoman who also made sure the taxes and ministers were paid, she owned much of the land now part of the California Plaza complex.
ADDRESS: bounded by Broadway, Spring, 3rd and 4th Streets, Los Angeles, CA MAP
PARKING: on premises

Central Avenue
DESCRIPTION: Extending from downtown to 100th street, this historic entertainment district rivaled the pulsating excitement of New York’s Harlem and Chicago’s Bronzeville from the 1920s thru 1950s; a national historic landmark, the Dunbar Hotel at 4225 Central built by Dr John Somerville in 1928, may have been the nation’s first hotel built for African Americans, it rivaled the Theresa Hotel in Harlem for distinctive guests; nationally famous Club Alabam’ was next door (now demolished); Lincoln Theater at Central and 23rd was the place for big band performances, including Duke Ellington’s band; countless jazz and blues bars like Babe & Rickey’s at 5259 Central (moved to Leimert Park) lined the avenue; when Fats Waller, Lena Horne, Nat “King” Cole, Fats Domino, BB King and Dizzy Gillespie frequently rocked the house
ADDRESS: Central Avenue from I-10 Freeway to I-105 Freeway, Los Angeles, CA MAP
PARKING: on street

Fire Station #30
DESCRIPTION: Restored and rededicated to honor African Americans who served as Los Angeles fireman since 1897; this station housed the first segregated unit of African American firemen from 1904-1954 when racism sometimes blazed higher than the fires; a retired Fireman who served at the station, Arnett Hartsfield, is the museum historian and was instrumental in its re-dedication to museum status; the two story building features Medals of Valor, a horse driven fire truck, fire hats, vintage photos since the station began and other artifacts
DAYS & HOURS: Tue & Thu 10a-2p
ADDRESS: 1401 Central Avenue, Los Angeles, CA MAP
PARKING: on street
PHONE: 213-744-1730

Sugar Hill District
DESCRIPTION: Just north of FAME Church, were the homes of several of the earliest African American movie stars, including Hattie McDaniel and Ethel Waters; in the 1950s, the I-10 Freeway bisected the district, ending its heyday; FAME Church purchased one of these distinguished buildings just across from the street and renamed in the Richard Allen House, in honor of the founder of the AME Church
ADDRESS: 2200 block South Harvard Blvd, Los Angeles, CA MAP
PARKING: on street

Angeles Funeral Home
DESCRIPTION: Opened in the 1960s, it is one of architect Paul Williams’ most striking designs both inside and out
ADDRESS: 3875 Crenshaw Blvd, Los Angeles, CA MAP
PARKING: on street

Maverick Flats Nightclub
DESCRIPTION: Many Soul music artists were discovered by record executives, established stars stopped by after their performances, and local DJs mixed it up with everybody when this was the spot in the 1970s and 80s
ADDRESS: 4225 Crenshaw Blvd, Los Angeles, CA MAP
PARKING: on premises and street
PHONE: 323-295-4179

Michael Jackson Residence
DESCRIPTION: Michael began renting this estate at $100,000/month in May 2009 until his untimely death on 25 June 2009; the gated estate with one side facing Sunset Blvd has a courtyard entrance, several wooded acres, a guest house, and a large swimming pool; NO visitors
ADDRESS: 100 North Carolwood Drive, Los Angeles, CA MAP
PARKING: Monovale Drive and Ladera Drive

Bunche Hall
DESCRIPTION: Named in honor of Dr. Ralph Bunche, a three letter athlete who was graduated Summa Cum Laude with a BA from UCLA in 1927, later earned an MA and Ph.D. from Harvard; Dr Bunche taught political science at Howard from 1928 to 1950 and Harvard from 1950 to 1952; he earned awards and distinctions the way many people wear jewelry — awarded the NAACP’s Spingarn Medal in 1949, 1st African American to win a Nobel Peace Prize in 1950; Theodore Roosevelt Medal of Honor in 1954; 1st African American to become Under Secretary for the US State Dept; 1st African American to become an Under Secretary for the United Nations in 1958, Presidential Medal of Freedom in 1963; this 11 story building for UCLA’s School of Social Science along with a bronze bust was dedicated to Dr. Bunche in 1968
ADDRESS: UCLA Campus, Los Angeles, CA MAP
PARKING: though garages surround each entrance to the campus, more fee-based parking is usually available at the Sunset Blvd entrance
PHONE: 310-825-2585

Jackson Family Residence
DESCRIPTION: Berry Gordy bought this residence for the Jackson Family when he moved Motown from Detroit to Los Angeles; for understandable reasons of privacy, the estate is gated and secured; only invited guests by the family are permitted
ADDRESS: 4641 Hayvenhurst Avenue, Los Angeles, CA MAP
PARKING: Free street parking on Hayvenhurst, but read parking signs