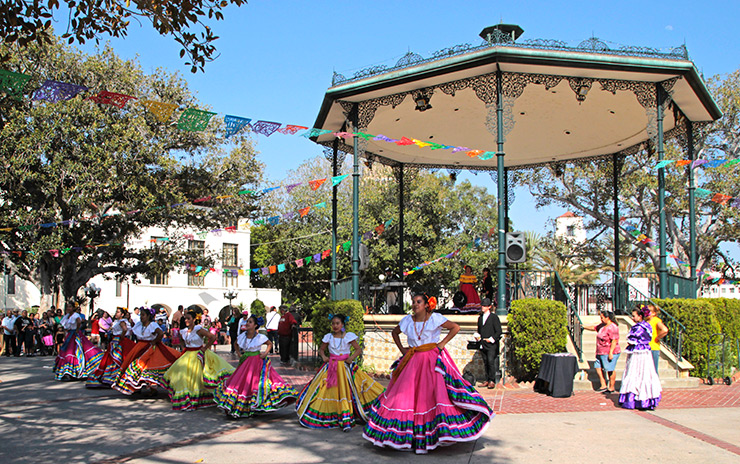 Hollywood Boulevard
DESCRIPTION: Although much longer, the portion from Vermont Avenue to La Brea Avenue is one of the most famous streets in America; in 1960, the first star was placed on the Hollywood Walk of Fame, which runs from Gower Street to La Brea Avenue; HWOF was later extended onto Vine Street; changing demographics and Americans switching to malls for shopping transformed Hollywood Blvd into a seedy area from the mid-1970s through the 1990s, if not for the Chinese Theatre and HWOF, it would have really tanked; then in 1999, the Hollywood extension of the Metro Red Line subway opened and several grand cinemas were restored to host movie premieres; biggest turning point was Hollywood & Highland shopping center with Kodak Theatre opening in 2001 and the Kodak Theatre began hosting the Academy Awards in 2002; shop and restaurant renovations are replacing more of the seediness each month; Hollywood Blvd is hip again — celebrities who in the past, would only hang out on Sunset Blvd, also patronize nightclubs here; housing conversions and a future entertainment complex at the corner of Hollywood and Vine also bode well; Hollywood Christmas Parade passes down Hollywood Boulevard every Saturday after Thanksgiving
ADMISSION: Free
DAYS & HOURS: daily from dusk to late
ADDRESS: 7100 to 6100 Hollywood Blvd, Los Angeles, CA MAP
PARKING: parking lots behind the boulevard
RAPID TRANSIT: Hollywood-Highland and Hollywood-Vine Metro Stations
PHONE: Hollywood Chamber 323-469-8311
WEBSITE: http://www.hollywoodchamber.net

Melrose Avenue
DESCRIPTION: this popular hang-out features a wide variety of upscale restaurants, wacky and trend-setting boutiques, coffeehouses, and The Improv comedy club; it is known as “The Place” to find garments before they become popular; it used to be home to one of Black LA’s most beloved restaurants, Georgia; each year it seems that a new black-owned boutique comes and goes on Melrose; another bit of trivia — the original Johnny Rockets opened on Melrose in 1986
ADMISSION: free
DAYS & HOURS: from dusk to late
ADDRESS: between San Vicente Blvd and La Brea Avenue, Los Angeles, CA MAP
PARKING: one street and valet parking for restaurants
RAPID TRANSIT: none
PHONE: no general number
WEBSITE:

Farmers Market & The Grove
DESCRIPTION: In 1934, farmers pulled into property known as Gilmore Island at the corner of Third & Fairfax to begin selling produce on the tailgates; customers parked on the dirt parking lot in spaces designated with chalk; then celebrities showed up to shop for fresh fruit and vegetables leading it to it becoming an visitor destination; today, the best of the old has been preserved, while all manner of upscale shop, restaurant and cineplex have been added, making it more popular than ever
ADMISSION: free
DAYS & HOURS: Mon-Fri 9a-9p,  Sat 9a-8p,  Sun 10a-7p
ADDRESS: 6333 West Third Street, Los Angeles, CA MAP
PARKING: on premises
RAPID TRANSIT: None
PHONE: 323-933-9211 or 866-993-9211
WEBSITE: http://www.farmersmarketla.com

Japanese American National Museum
DESCRIPTION: This informative and evocative museum and library will broaden your horizons about Japanese Americans contributions to our nation in both good and bad; it also shows the housing linkage between Japanese Americans and African Americans in LA; the museum’s showcase exhibit covers World War II when 120,000 Japanese Americans were interned in U.S. prison camps after the attack on Pearl Harbor; rather than remain interred, many men chose to prove their American loyalty by enlisting in the U.S. Army, where they were assigned to fight the Germans in Europe; their regiment became the most highly decorated unit during WWII
ADMISSION: Adults $3, students and ages 6 to 17
DAYS & HOURS: Tue-Sun 10a-5p, Thu until 8p
ADDRESS: 369 First Street, Los Angeles, CA MAP
PARKING: on premises
RAPID TRANSIT: Civic Center Metro Station
PHONE: 800-461-5266
WEBSITE: http://www.janm.org

Library Tower and Steps
DESCRIPTION: At 72 stories and 1018 feet tall, LA’s tallest building opened in 1989; its graceful, cylindrical architecture shows up in so many TV shows, commercials, magazine ads, web ads, and movies that it has no problem attracting a bevy of corporate naming rights suitors — changing names from Library Tower to First Interstate Tower to US Bank Tower today; unfortunately, there is no public viewing deck in the tower; adjacent to the tower is a sculpture of a graceful sistah in all of her natural glory — one of only two public nudes of a sistah in America; from the sculpture, one walks down architecturally cohesive steps that feature a waterfall in the middle leading to the magnificent Los Angeles Central Library across 5th Street
ADMISSION: free
DAYS & HOURS: 24/7
ADDRESS: 633 West 5th Street, Los Angeles, CA MAP
PARKING: garage behind the building
RAPID TRANSIT: Pershing Square Metro Station
PHONE: 213-626-3300
WEBSITE: http://www.maguireproperties.com/USBankTower

Westfield Century City
DESCRIPTION: Adjacent to Avenue of the Stars, it feels like a destination more than a mall. Its a great place to people watch, sample fine restaurants and take in epic movies. You can shop for hours among dozens of stores anchored by flagship Macys and Bloomingdales or dine among several pleasant outdoor cafes and indoor bistros. Considering that MGM headquarters is across the street and Fox Studios is only three blocks away, many people hang out after work to spark lots of movie and TV show conversation in the restaurants.
DAYS & HOURS: Mon-Sat 10a-9p, Sun Noon-7p
ADDRESS: 10250 Santa Monica Blvd, Los Angeles, CA MAP
PARKING: first 3 hours are free self-parking; valet parking available
RAPID TRANSIT: none
PHONE: 310-277-3898
WEBSITE: http://www.westfield.com/centurycity

Santa Monica Third Street Promenade
DESCRIPTION: A popular three-block stretch of pedestrian-oriented quirky shops and restaurants; enjoy a leisurely stroll here and stop at one of its numerous cafes; a night a handful of Techno clubs come alive; there are plenty of parking structures surround the promenade; perhaps it is best loved for its profusion of restaurants, bistros and cafes that cater to every taste; it doesn’t hurt to be within walking distance of the Santa Monica Pier either
ADMISSION: free
DAYS & HOURS: daily 9a-1a
ADDRESS: between Wilshire Blvd and Santa Monica Blvd, Santa Monica, CA MAP
PARKING: garage parking
RAPID TRANSIT: 4th Street-Colorado Metro Station
PHONE: 310-393-8355
WEBSITE: http://www.downtownsm.com