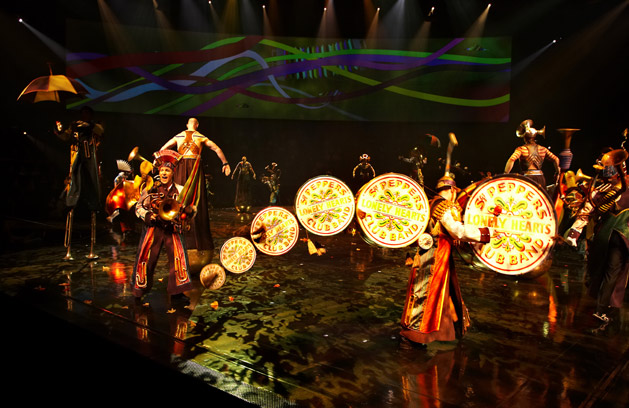 LOVE takes audiences on a passionate, iconic journey of the Beatles music from the 1960s and 70s. Like those halcyon days, at least for those of us born in the 1950s or earlier, this nostalgic journey is treat to experience and remember like Yesterday. Before summarizing the show experience, a bit of context is in order.

As a young brother only age 11 by 1968, I was aware of and respected the Beatles for their powerful impact on Pop Music. They appeared in the news practically everyday when there were only 3 national TV networks. Yet, I did not culturally connect with them since my daily diet was Soul Music. Nevertheless, I liked I Want To Hold Your Hand because someone played it at a party and I got to hold a cute girl’s hand while dancing!

But like all Americans, be they Black, White, Brown and Red hoping for the end to the Vietnam War, more of our daily concerns began to intersect in the words and instrumentals of R&B, Rock and Pop Music. Black and White groups began appearing in concerts together. Audiences cross-pollinated a musical appreciation of these groups as equals in the genre. The Beatles professed their sincere love of and influence by R&B-Soul Music and the artists who created it. They even planned a secret recording session at STAX Records studio. But word leaked out causing traffic jams that scuttled the recording session. So in 1970 when the Beatles broke up, it was important news, even in Black America, though not as big as the break up of my beloved Temptations (Paul Williams death, David Ruffin and Eddie Kendricks exit).

By 1973-75, I and many of my contemporaries, appreciated the lyrics and musicality of many Beatles songs. Hey Jude, All You Need is Love, Yesterday, Revolution, and Lucy In The Sky With Diamonds easily come to mind. But many Beatles songs I still don’t understand like, I Am The Walrus. Huuummm, must be a British thing.

Approaching this show, I was primed to revisit a precious collection of some of the best music of those times. Now I could do it with the benefit of middle-age context. LOVE did not disappoint.

In this type of show, sound really matters. To the trained ear, all the Beatles songs must have been digitally re-mastered. There were no ticks or pops like the album recordings of those days. The songs are mostly loud, but never distorted. Guitars sound like guitars, drums sound like drums and bass sounds like bass, not the 75% distortion heard on many popular records today. In addition to the acoustically-tuned theater that perfectly reflected sound to your ears, there are 3 speakers in each seat – so over 6,500 total speakers create the most complex audio system in the world!

The musical journey takes advantage of all the set design, technical, and acrobatic wizardry for which Cirque du Soleil is justly acclaimed. Its been said that music is the door to our emotions. If true, colors must represent the walkway in. LOVE’s kaleidoscope of colors amplifies the passion of music in ways that can only be described by experiencing the show.

An international cast of 75 dancers, character actors, and acrobats, is presented with full impact because the closest seat is only 23 feet from the stage, while the furthest seat is only 98 feet. The stage is made up of 7 lifts, several trap doors and 1 turntable. Each lift is capable of elevating 20,000 lbs. So you will see many artists “techno-magically” fly, lower, levitate and disappear across the auditorium. And of course there’s always Cirque du Soleil’s trademark element of surprise. Moment by moment, you are captivated.

Overall, the show was fantastic and held rousing appeal to those of us age 40 and over. Must be a generational thing. I only wish Cirque does a similar book-end show for the Temptations. Maybe I should hold their hand.