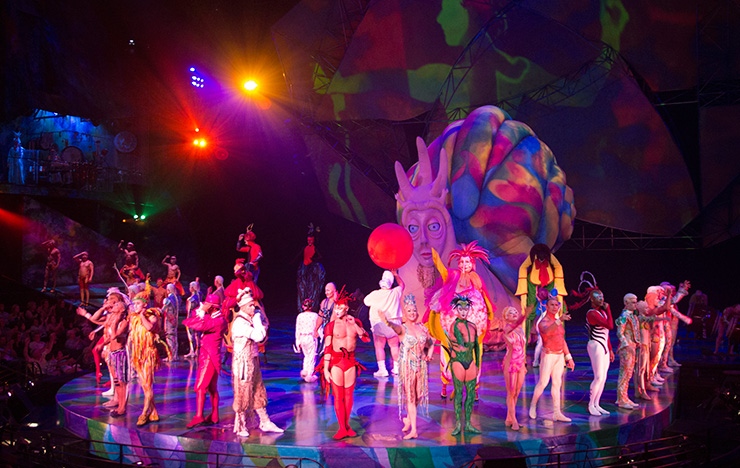 Nathan Morris, Shawn Stockman and Wanya Morris of Boyz II Men return to the Mirage. After the pandemic shutdown, you will have greater appreciation for your 1990s-2000s favorites from one of the great Motown groups; https://mirage.mgmresorts.com/en/entertainment/boyz-ii-men.html

Another great option is comedian Eddie Griffin at the Sahara. He might have a few things to say about COVID, social distancing, and social justice; https://www.saharalasvegas.com/entertainment/eddie-griffin

MJ Tribute Concert Live at the Strat is a must-see for King of Pop fans. You will be impressed; https://thestrat.com/entertainment/featured/mj-live

LA Comedy Club at the Strat features a number of upcoming comedians. You never know when you’ll see the next Jamie Foxx; https://thestrat.com/entertainment/featured/la-comedy-club

The Beatles LOVE
LOVE takes audiences on a passionate, iconic journey of the Beatles music from the 1960s and 70s.

Mystere
Mystère takes audiences on an Alice and Wonderland-like journey, where the end seems like the beginning.

O
In the theater of the mind, O percolates with daring imagination and refined technical accomplishment.

Ka
Darkest of all Cirque du Soleil shows in Las Vegas, Ka is an unprecedented ballet of movement more than words.

Le Reve
Having created Mystere, O and Celine Dion’s New Day, Franco Dragone had a wide reservoir of inspiration to create this masterpiece.

Legends In Concert
This celebrity impersonation show is neither over-the-top, nor boring.

David Copperfield
For making the Statue of Liberty vanish while surrounded by spectators, walking through the Great Wall of China.