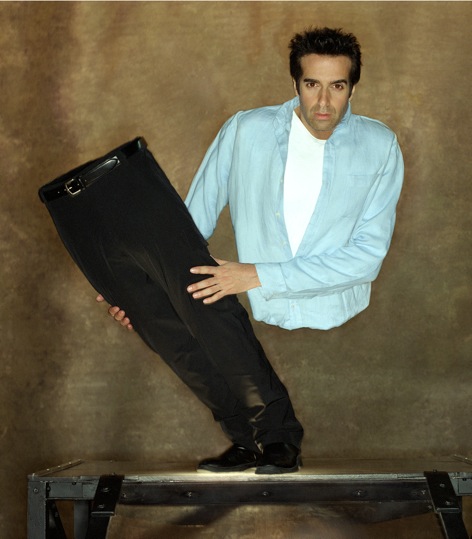 by Thomas Dorsey of Soul Of America

For making the Statue of Liberty vanish while surrounded by spectators, walking through the Great Wall of China, escaping the center ring of a 2000 degree Tornado of Fire and many other stupendous acts, David Copperfield has well-deserved status as the most awarded magician in the world. A consummate showman, he incorporates the right mix of illusion, comedy, storytelling and audience interaction in a family-friendly show that briskly moves between acts like a well-edited movie.

Since this is the Las Vegas Strip and David Copperfield is the grand illusionist, I wondered, if there would be one amazing oversized illusion in his show. That question was quickly answered as I entered the Hollywood Theater in the MGM Grand Casino Resort. The smaller theater signaled that Copperfield would not make oversized objects vanish this time. But as things unfolded, I realized to my delight, that intimate seating with table service was appropriate scale and comfort for this 90-minute show.

To better appreciate and measure the craftsmanship of this legendary magician, I borrowed the storytelling definition of a Magic Act from an underrated, but nonetheless great movie called The Prestige:

“Every great magic trick consists of three parts. The first part is called “The Pledge“. The magician shows you something ordinary: a deck of cards, a bird or a man. Perhaps he asks you to inspect this object to see if it is indeed real, unaltered, normal. But of course … it probably isn’t. The second act is called “The Turn“. The magician takes the ordinary something and makes it do something extraordinary. Now you’re looking for the secret … but you won’t find it, because of course you’re not really looking. You don’t really want to know. You want to be fooled. But you wouldn’t clap yet. Because making something disappear isn’t enough; you have to bring it back. That’s why every magic trick has a third act, the hardest part, the part we call “The Prestige“.”

Since I’m an analytical person who has seen many magic shows on the Strip and TV, I like to play Sherlock Holmes deconstructing acts. Most illusions on the Strip, don’t impress me anymore. Cards, rabbits, birdcage and sawing-people-in-half tricks are a bore. Jaded as I am today, I prefer to evaluate illusions with a brutally-honest four-scale rating system:

Good: Entertaining, but I figured out the Turn or Prestige at the show

Astonishing: A mind-blowing Prestige that stands the test of time

Sitting in the center first row and touching the stage, it was the perfect place to evaluate the Pledge, the Turn, and the Prestige of his magic acts. Though I’ve seen a couple Poor acts on Las Vegas stages, in David Copperfield’s show, there are no Poor acts. But in my opinion, Copperfield can drop the expandable car act that appears on stage, then collapses for a swift exit. It’s a Good illusion for lesser Las Vegas magicians. David Copperfield, “The Master Magician”, should always be better.

For his Excellent illusions, I could not imagine how Copperfield did them without magician aids. Yet given he spends at least 2 years polishing each act before its show-worthy, Copperfield executes them all with aplomb that seems effortless. I saw no reflections, trap door lines, staff in wrong positions, visible masks, or stunt double giveaways.

David Copperfield knows that some audience members understand statistical probability. That’s where Copperfield displays his tour de force skills as The Master Magician. Several of his illusions trigger the left brain to analyze the chances of audience “plant” participants vs. random participants. Using random elements as part of several acts, he wants to convince your left brain that audience plants do not play a part in his act. The lone exception is when Copperfield pre-announces that a single audience member had been trained to participate in one act.

Without giving away too much, its hard to imagine that free-flowing objects would randomly land in the hands of “audience plants” during his Words and Numbers acts. I won’t spoil their intrigue for you, but advise that you to carefully listen and watch these and other Excellent acts unfold during the show.

In another Excellent act, David Copperfield appears on stage, then in the next moment, like the comic-book character Flash, he appears at the rear of the theatre. After the show, I figured out how he did that one, but I Pledge not to tell.

Its difficult to count on live, walking animals to play their scripted role in a magic act. So I’m doubly impressed that Copperfield pulls off the greatest illusion I’ve ever seen, by using a happy-go-lucky goose. That goose comedically prances across the stage during the Pledge, then participates in a very simple, but impressive Turn. How Copperfield got that goose to reappear at another location during the Prestige was absolutely astonishing. I only had one drink and saw all the staff positions on stage. Nothing under the prop table moved or gave the slightest hint that a trap door, mirror or collapsible device was used. There was no fake goose! I touched along the stage area where the goose reappeared and saw no abnormalities or clues. Six weeks later, I figured out a possible way to do the Turn, but still can’t figure out a plausible way to perform the Prestige — unfreakin’ believable.

For a lot of technical reasons, that astonishing Goose Act was harder than making the Statue of Liberty disappear on TV. On the strength of that and many other astonishing acts, I am convinced that David Copperfield = Magic.