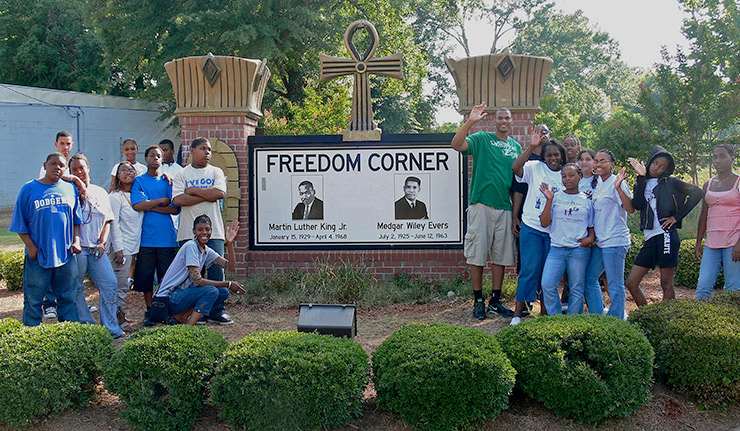 For plantation owners in the Deep South, the loss of slavery was tolerable because sharecropping and Jim Crow Apartheid for African Americans replaced it. After the Reconstruction Period (1865-1877), Klan activity and Black Codes spread like wildfire. To the Klan way of thinking, keeping a foot squarely on the neck of Black folks was a sacred calling to maintain their way of life. Most other whites in the region went along because they too were fearful of the Klan, which often held or influenced positions of power. Another reason is, somebody had the do the backbreaking work in sun-drenched cotton fields. Letting African Americans vote, live, work and learn where they please would surely upset the socioeconomic order.

Though Dr. King and federal law were a tremendous help, two local heroes deserve the majority credit for changing civil rights history in Mississippi – Medgar Evers and Fannie Lou Hamer. In 1963, only 28,000 Black Mississippians were registered voters. In 1965, President Lyndon B. Johnson passed the Voting Rights Act and by 1971, there were 250,000 Black registered voters in Mississippi. By 1973, Mississippi had 145 Black elected officials and African Americans were enrolled in every state college. By 1982, Mississippi had over 500,000 registered Black voters. In the 21st century Jackson has a Black mayor. Surely, Fannie and Medgar would celebrate those aspects of positive change.

After Medgar Evers (1925-1963) served in the Army in 1943, he attended Alcorn College, now Alcorn State University. A true Renaissance man at Alcorn, Medgar was a member of the debate team, choir, football and track teams, held student offices and edited the school newspaper. At Alcorn, he met Myrlie Beasley, who married him in 1951. After receiving his B.A. they moved to Mound Bayou, Mississippi and Medgar began establishing NAACP chapters throughout the Mississippi Delta and organizing boycotts of gasoline stations that refused to allow blacks to use their restrooms. Even after the 1954 Supreme Court decision overturning school segregation, Evers was denied admission to the University of Mississippi Law School. That same year he was appointed the NAACP’s first Mississippi Field Secretary.

The Evers family moved to Jackson and together set up the NAACP office. Their efforts helped get James Meredith admitted to the University of Mississippi in 1962. That simple feat opened the door for more civil rights advancement in the state. But an ensuing campus riot left two people dead, which in the minds of many Klansmen, lay squarely at the feet of Medgar Evers. Hatred, which had been fermenting towards him for his many civil rights activities, reached a boiling point.

On 12 June 1963 as he was returning home from a meeting, Medgar Evers was killed by an assassin’s bullet in front of his house. Black and white leaders from around the nation came to Jackson for his funeral service. The stature of his service to our nation is such that he is buried at Arlington National Cemetery, shortly before the 1963 March on Washington.

Fannie Lou Hamer (1918-1977) was born to sharecroppers on a plantation in Mississippi. At the age of six, she picked cotton. Fannie dropped out of school after the sixth grade to help the family. In 1944, Fannie married Perry “Pap” Hamer. They moved to the Marlow plantation in Ruleville, Mississippi and became sharecroppers. Somewhere along the way, she developed the courage of a lion and a bold speaker’s voice.

In the 1960’s, Fannie became interested in the civil rights movement and voter registration when members of the Student Nonviolent Coordinating Committee (SNCC) and the Southern Christian Leadership Conference (SCLC) visited Mississippi. African-Americans in the South were illegally and unfairly dissuaded from voting. For example, Fannie and other Black folks had to pass “Voter Tests.” On one such test, Fannie was asked to interpret the state’s constitution. Without much formal education, she could not pass this test, which was not given to White citizens. When she returned home, her landowner gave her an ultimatum to stop trying to vote or leave his property. Fannie left the property and her family. Her husband remained to continue working, while Fannie stayed with various friends and neighbors.

In 1963, Fannie finally passed the test and became a registered voter. Inspired by Ella Baker and buoyed with optimism to register more first-time African Americans voters, Fannie became a field secretary for SNCC and traveled across the South. On 9 June 1963, during one of her bus trips, she and other SNCC workers stopped in Winona, Mississippi. When some SNCC workers deliberately visited the Whites Only waiting room, the whole group was arrested. While in custody, all of them were severely beaten, sustaining injuries that lingered the rest of her lives. SNCC lawyers bailed them out and filed suit against the Winona police. None of their assailants was found guilty. Reportedly, this injustice led Fannie soon afterwards to coin a signature call of the Civil Rights Movement, “I’m sick and tired of being sick and tired.”

A couple days later, Medgar Evers was killed, which only strengthened SNCC, SCLC and NAACP resolve. Though field work took her across the rural South to register voters, question the voting process and promote Black political representation, by necessity, Fannie spent a great deal of time in Jackson, the capitol of Mississippi.

Fannie never let grass grow under her feet as Civil Rights legislation was passed. In 1968, she helped create a food cooperative for the poor. In 1969, she founded the Freedom Farm Cooperative. In 1972, she helped found the National Women’s Political Caucus. To cope with daily troubles, Fannie loved to sing This Little Light of Mine. Without concern for personal fortune, when Fannie died at age 59, she and husband were penniless. Friends raised money to pay for the funeral of this selfless champion. We are all indebted to her service.