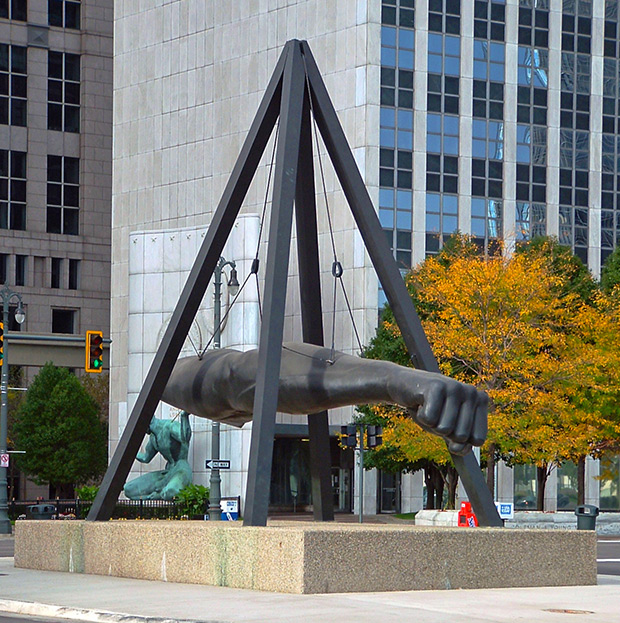 Hart Plaza
DESCRIPTION: Located at the site at where Antoine de la Mothe Cadillac landed in 1701, when he founded Fort Pontchartrain du Détroit, which became the City of Detroit; a monument to Antoine de la Mothe Cadillac depicting the moment he arrived is a nice touch; in 1981, Dodge Fountain designed by Isamu Noguchi starting the Riverwalk transformation, its the fountain contains 300 jets and 300 lights and has intricate and computerized lighting and nozzle functions, which can create different configurations, dependent on temperature; Pylon is a stainless steel spire sculpture designed by Isamu Noguchi, stands 120 feet tall is a double helix inspired by the double helix of DNA; Transcending is an arch sculpture located west of the entrance to Hart Plaza near Woodward Avenue and Jefferson Avenue, dedicated in 2003 — it celebrates Michigan’s contributions to the labor movement; in 2001, Gateway to Freedom International Memorial to the Underground Railroad and a cruise ship terminal for the MS Columbus and the Yorktown opened as well
ADDRESS: Riverwalk anchors at Atwater Street, Detroit, MI MAP

Greektown Casino
DESCRIPTION: The emphasis is on fun in the heart of the city’s bustling restaurant district; features cutting edge gaming, including Detroit’s only poker room; Must be 21 to enter
ADDRESS: 555 East Lafayette, Detroit, MI MAP
PHONE: 313-223-2999
WEBSITE: http://www.greektowncasino.com

Campus Martius Park
DESCRIPTION: This 2.5 acre regional park is where all of the major avenues radiate out from Detroit’s Point of Origin. It is the gathering place of downtown surrounded by the grand architecture of the landmark Penobscot Building, contemporary Compuware and Quicken Loans Headquarters and One Kennedy Square Buildings and the Soldiers & Sailors Memorial. A 24-hour neighborhood of residents, eateries, retail outlets, Westin Book Cadillac Hotel, a seasonal entertainment that attracts 2 million annual visitors — something is always going on. Soldiers & Sailors Memorial was dedicated in 1872, to the brave troops who fought in the Civil War. Titled “Emancipation”, the monument has five bronze statues. The figure of Emancipation is said to be modeled after Sojourner Truth, who lived in Detroit for a time.
ADDRESS: Woodward Avenue at Campus Martius, Detroit, MI MAP
TRANSIT: Detroit People Mover and M-1 Streetcar coming
PARKING: lot adjacent to the Museum and street parking

Detroit Historical Museum
DESCRIPTION: At 80,000 square feet, it covers the history of the city from its founding in 1701 to the emergence of the auto industry. Major exhibits tell the story of the thousands of former slaves who made Detroit their last Underground Railroad stop before fleeing over the border to Canada. It also covers the instrumental roles African Americans played in the automotive industry, as highlighted by the Motor City exhibit.
ADMISSION:see website for pricing options; age 4 and under enter Free
DAYS & HOURS: Tue-Fri 9:30a-5p, Sat-Sun 10a-5p
ADDRESS: 5401 Woodward Avenue, Detroit, MI MAP
TRANSIT: Detroit People Mover and M-1 Streetcar coming
PARKING: lot adjacent to the Museum and street parking
PHONE: 313-833-1805
WEBSITE: http://www.detroithistorical.org

MGM Grand Detroit Casino
DESCRIPTION: Opened in 2007, this MGM Grand features 400 Internet rooms in a sparkling 18-story hotel tower; as you approach the Grand Garden on the corner of Third and Bagley, note that its seasonal display changes five times annually; inside lies a guest-only Living Room that features wall-length fireplace, and a dramatic back-lit wall adornment with a cascading fountain, over-sized ottomans, plush sofas and contemporary artwork; the 24-hour casino sports 100,000-square-feet of gaming space, a premium poker room and the largest selection of slot machines in the Midwest keep this pace abuzz; a collection of Vegas-style lounges and restaurants that include Wolfgang Puck, V, Agua, Ignite, U-Me-Drink and Intice; Immerse Spa is a 20,000 square foot oasis with a fantastic range of services; guests access the Immerse fitness area and pool for a small fee; free self parking
ADDRESS: 1777 Third Street, Detroit, MI MAP
TRANSIT: none
PARKING: valet and self parking
PHONE: reservations 888-646-3387
WEBSITE: http://www.mgmgranddetroit.com

Henry Ford Museum and Greenfield Village
DESCRIPTION: A magnificent history museum that brings the American Experience to life; this 90-acre campus has five distinct attractions that captivate visitors of all ages; Henry Ford Museum has one of the nation’s largest collections of American inventions and authentic collections from people and events that changed our lives including, the JFK assassination limo, Thomas Edison’s lab, and the Wright Brothers’ bicycle shop to name a few; the ultimate piece may be the Civil Rights exhibit which has the bus on which Rosa Parks made her stand against segregation triggering the Montgomery bus boycott and galvanizing the Civil Rights Movement; Greenfield Village has living history exhibits of America’s past; it is one of the few places to see preserved slave quarters transported from a plantation near Savannah, Georgia; the Hermitage Slave Houses allow visitors to take a real look at what life was like for enslaved people; within the village, Hermitage Slave Houses are made of brick (the principal product of the plantation) and have survived longer than the majority of slave quarters built in this period; also located on the grounds is the Mattox House, the actual 19th and early 20th Century home of several generations of African American farmers who lived near Savannah, Georgia; Ford Rouge Factory Tour is a journey into the genius of American automotive manufacturing; Benson Ford Research Center presents a closer look at American technological genius at work; Henry Ford IMAX Theater rounds out the offerings with mega-size popular movies and documentaries
ADMISSION: ranges from $10-32, depending on the many options you choose
DAYS & HOURS: daily 9:30a-5p
ADDRESS:  20900 Oakwood Blvd, Dearborn, MI MAP
PARKING: free on site, but make a reservation
PHONE: 313-982-6001
WEBSITE: http://www.hfmgv.org