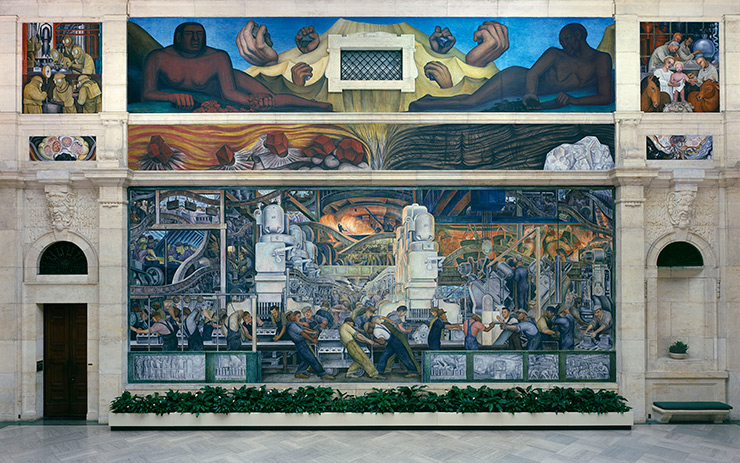 Fox Theater
DESCRIPTION: Built in 1928, the Fox anchors Detroit’s loosely configured Theater District. It is kin to the elegant movie palaces built in the 1920s by Fox Studio to display its movies in San Francisco, Brooklyn, Atlanta and St. Louis. The architect designed the Fox with an interior that blends Burmese, Chinese, Indian and Persian motifs. Once you enter, look at that faux organ pipes in the lobby. The balcony however, does contain a real organ and pipes since it opened while their were movies without talking. Having 5048 seats today, it features live concerts and performances such as Blast, Radio City Christmas Spectacular, The Parade of the Wooden Soldiers, The Teddy Bear Nutcracker and The Living Nativity.
BOX OFFICE: Tue-Sat 10a–5:30p
ADDRESS: 2211 Woodward Avenue, Detroit, MI MAP
TRANSIT: M-1 Streetcar coming
PARKING: lot nearby
PHONE: 313-471-3200
WEBSITE: http://www.olympiaentertainment.com

Museum of Contemporary Art Detroit
DESCRIPTION: This a 22,000 square foot former auto dealership only hosts traveling and temporary exhibitions, but that’s what gives it such a hip creative vibe. Few museums have the guts to put a graffiti-like mural on its facade. That’s a marker of how creative they strive to be with a small budget. MOCAD also hosts musical, literary and artistic events throughout the year, including acclaimed artists Roy Ayers, Amp Fiddler, Michael Yonkers, and Roscoe Mitchell. The venue includes a cafe and gift shop.
ADMISSION:tours are free, but donations are greatly appreciated
DAYS & HOURS: Wed, Sat and Sun 11a-5p, Thu & Fri: 11a-8p
ADDRESS: 4454 Woodward Avenue, Detroit, MI MAP
PARKING: lots nearby
PHONE: 313-832-6622
WEBSITE: http://www.mocadetroit.org

Fisher Theatre
DESCRIPTION: Located in New Center district inside the Fisher Building, this elegant music center was built in 1961. It features a Mayan Revival style interior and seats 2,089 patrons. It is large enough to host the biggest Pre-Broadway shows. This theatre has featured Motown The Musical, Rent, Guys And Dolls, The Best Little Whorehouse In Texas, and Fiddler On The Roof just to name a few Broadway productions. Today, it hosts black comedy events on tour as well. The theater has been upgraded for handicap accessibility and it Interprets shows for the hearing impaired, if given enough notice. Fisher Theater is part of the Nederlander chain of classic live theaters across America.
BOX OFFICE: Mon-Fri 10a-5p during non-performance weeks and 10a to Showtime
ADDRESS: 3011 West Grand Boulevard, Detroit, MI MAP
TRANSIT: M-1 Streetcar coming
PARKING: Third Avenue Parking lot at Grand Blvd
PHONE: 313-872-1000
WEBSITE: http://www.nederlanderdetroit.com/

Detroit Opera House
DESCRIPTION: Located near Grand Circus Park, this venue originally opened as the Capitol Theater in 1922. It was the 5th largest theater in the world and first hosted Vaudeville and motion pictures. The building was constructed with superb acoustics and in the style of the grand European opera houses. The same architect designed the Fox Theater, The Fillmore and Orchestra Hall at Fisher Music Center. The theater went through neglect in the 1970s, minor restoration in the 1980s and finally in 1996, beautiful restoration as a 2700-seat venue and home to Michigan Opera Theatre. Don’t let the brutish looking exterior makeover fool you, the interior looks terrific and there’s a rooftop patio. Detroit Opera House occasionally co-hosts Nederlander-sponsored Broadway shows on tour.
BOX OFFICE: Mon-Fri 10a-5p during non-performance weeks and 10a to Showtime
ADDRESS: 1526 Broadway Street, Detroit, MI MAP
TRANSIT: Streetcar coming soon
PARKING: Detroit Opera House Garage at 1426 Broadway Street
PHONE: 313-961-3500
WEBSITE: http://www.michiganopera.org

Max & Marjorie Fisher Music Center
DESCRIPTION: Located in New Center district, inside the Fisher Building, the elegant music center was built in 1961. Its large enough to host the biggest and best Broadway shows on tour. This theatre has featured Guys And Dolls, The Best Little Whorehouse In Texas, and Fiddler On The Roof just to name a few Broadway productions. Today, it hosts black comedy events on tour as well. Fisher Theatre is part of the Nederlander chain of classic live theaters across America.
BOX OFFICE: Mon-Fri 10a-5p during non-performance weeks and 10a to Showtime
ADDRESS: 3711 Woodward Avenue, Detroit, MI MAP
TRANSIT: M-1 Streetcar coming
PARKING: garage nearby
PHONE: 313-872-1000
WEBSITE: http://www.nederlanderdetroit.com/