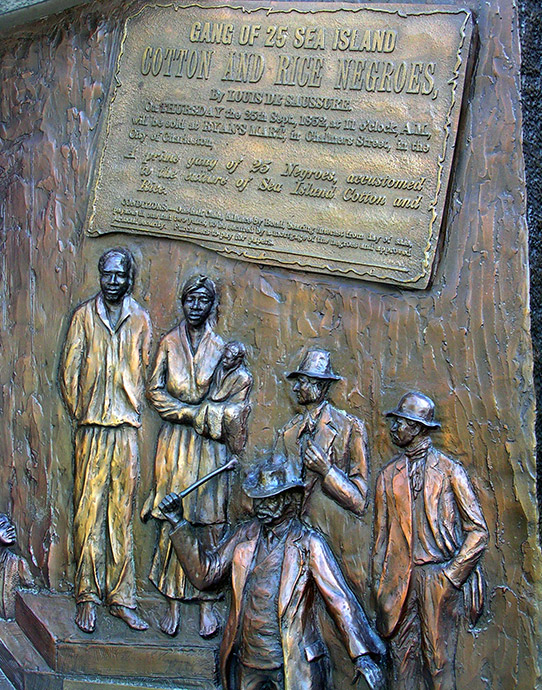 Columbia, the first-planned capital in America is named for Christopher Columbus and was founded in 1786. By 1790, the state capital moved from Charleston to Columbia to ease the struggle between the aristocratic Low Country (Charleston) and the poorer, industrial Up Country (Columbia). In 1806, Columbia incorporated and became the first planned state capital in the U.S. Celia Mann, a Charleston slave, who bought her freedom and walked to Columbia, purchased Mann-Simons Cottage in 1850.

Following a three day convention in Columbia on 20 December 1860, South Carolina became the first state to secede from the Union, laying the groundwork for the Civil War. 63,000 men from the state served in the Confederate armed forces. Some were African American man-servants.

On 16 February 1865 when the Civil War’s end was near, General Tecumseh Sherman marched into a burning Columbia. It’s unclear which side set the blaze, but it was a joyous day for African American slaves to be freed. In 1868, South Carolina was readmitted to the Union under the careful watch of Union forces during Reconstruction. In 1870, both predecessors of Benedict College and Allen University were formed.

In 1877, when Union Forces were withdrawn, Reconstruction abruptly ended. A series of Jim Crow “Black Codes” were rapidly passed to remove African American empowerment in all aspects of life in South Carolina and the South in general. A byproduct of Black Codes was the lines of segregation became drawn, when in prior years Blacks and Whites often lived and worked side by side.

In 1917, Fort Jackson, the nation’s largest U.S. Army training facility, was established to assist with World War I. Though Benedict College is one of the earliest southern HBCUs to become active in the 1930s Civil Rights Movement, it was largely ineffective. Dealing with the issues of out-of-work European Americans during the Depression and then extending into World War I and the Korean War occupied the thought processes of white politicians.

1954 represented a turning point in a state that that rivaled Mississippi for upheld White southern traditions at the expense of its Black citizens. Whether ready or not, South Carolina would have to confront the national aftershocks of the Brown vs. Board of Education Decision by the Supreme Court. Another major event in 1954 was Strom Thurmond becoming the first U.S. Senator elected by a write-in vote. He was a staunch opponent to Civil Rights legislation, though later in life he apologized for that position.

In 1992, James Clyburn was elected to the U.S. House of Representatives in the district incorporating Columbia. Many have heard about the NAACP boycott of South Carolina due to the confederate flag issue. Suffice it to say, the state has moved beyond that impasse and thankfully we have something just as enduring and far more meaningful to celebrate of the South Carolina State House grounds – one of the best bronze monuments summarizing the history of African Americans in the region.

Though the pace is slower and the city is smaller than Charlotte, you would be wrong to think of it as a hick town. It is very much a University town with new restaurants, shops and galleries opening each week and a growing economy.