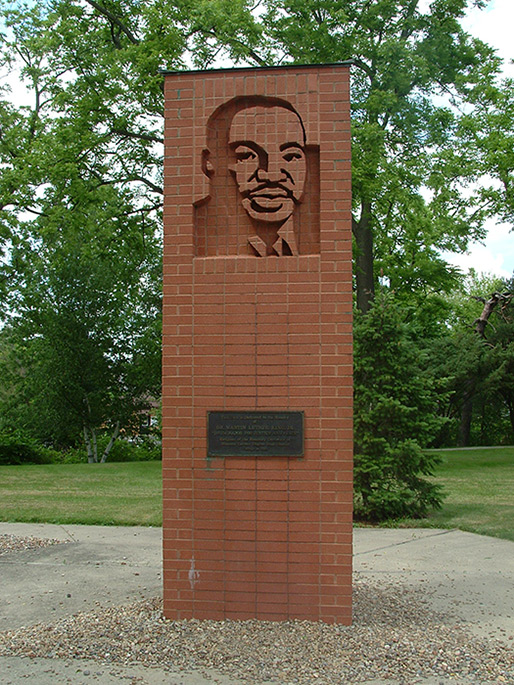 Bardwell House
DESCRIPTION: Bardwell House, Greek Revival cottage dating from 1846, is believed to be the only house in town that has an actual, physical hiding space for slaves, where they are believed to have been hidden during the Antebellum days. It is named after the Reverend John Payne Bardwell and his wife Cornelia who played an integral role in the antislavery movement in Oberlin and other states
ADDRESS: 181 East Lorain Street, Oberlin, OH MAP

First Church of Oberlin
DESCRIPTION: The First Church of Oberlin— built in the 1840’s and situated at the center of town–was very well-known, popular and incredibly influential in the Abolitionist Movement. By 1860 it was one of the largest congregations in the nation and had the largest auditorium west of the Allegany Mountains, with a seating capacity larger than the town’s population at the time. It is believed that fugitive slaves may have been hidden in the steeple. In later years, many influential Black folks spoke at the church including Dr. Martin Luther King, Jr., Maya Angelou and others
ADDRESS: 106 North Main Street, Oberlin, OH MAP
PHONE: 440-775-1711
WEBSITE: http://www.firstchurchoberlin.org

Harpers Ferry Memorial
DESCRIPTION: Located in Martin Luther King, Jr. Park (it was originally erected in Westwood Cemetery), the memorial commemorates the lives of the Black citizens who died during the famous raid on Harpers Ferry, the largest surrender of Federal troops during the Civil War
ADDRESS: East Vine Street, Oberlin, OH MAP

Langston House
DESCRIPTION: A national historic landmark, Langston House was the home of John Mercer Langston, the great uncle of Langston Hughes. Born in 1829, Mercer accomplished a great deal in his lifetime, in part attributable to a sizable inheritance he received from his parents’ death (his mother was of Black and Indian ancestry, his father a wealthy White planter and slaveholder). He was heavily involved in the Black rights movement in Cincinnati in the mid-1800’s, from there enrolling and becoming a graduate of Oberlin College with a Master’s degree. Despite this, Mercer was denied entry into law school, so he taught himself and ultimately passed the Bar, becoming Ohio’s first Black lawyer. It is also believed that he was the first African American elected to public office in country. With these distinctions he continued to fight for the lives of runaway slaves, implemented numerous antislavery societies throughout the state and assembled several Black military regiments. In Oberlin where he spent many years he also served on the Board of Education and as a city councilman.
ADDRESS: 207 East College, Oberlin, OH MAP

Dr. Martin Luther King Park
DESCRIPTION: the park possesses monuments to the people who went to Harpers Ferry, the rescuers and Dr. King himself. King’s connection to Oberlin stems from the numerous visits he made during the Civil Rights Movement, beginning around 1957. He spoke many times at the First Church of Oberlin, as well as other venues around town. In 1965, Dr. King was awarded an honorary degree of humane letters by Oberlin College
ADDRESS: East Vine Street, Oberlin, OH MAP

Westwood Cemetery
DESCRIPTION: Founded in 1864, Westwood cemetery is the final resting place of many of Oberlin’s most influential citizens—founding fathers, war veterans, political and social leaders and average residents alike—whose work, duty and dedication to the abolitionist movement in Oberlin and Ohio are still felt today. Some of those buried here include Lewis Clarke, the original model for George Harris–one of the characters in Uncle Tom’s Cabin; the longtime slave and later free person of color who continued to live with his owner’s family, who desired to be buried behind the family mausoleum; four-year old fugitive slave orphan Lee Howard Dobbins who was left to live with town abolitionists; James Monroe, resident of the Monroe House; John White, an escaped slave from West Virginia who later became an Oberlin landowner and farmer; ex-slave Henry Lee who sued the railroad and won, after he suffered a brutal beating for refusing to give up his first class train seat in order to move to a section reserved for Blacks; Oberlin clerk and printer Simeon Bushnell who was jailed for his role in the Oberlin-Wellington Slave Rescue; and Sabram Cox, an ex-slave active in Oberlin on the Underground Railroad and as a street commissioner and member of the village council, among numerous others
ADDRESS: Westwood Cemetery, Oberlin, OH MAP

Wilson Bruce Evans House
DESCRIPTION: Built in 1856 and owned by free brothers, literally, of color–Wilson and Henry Evans–the home is now a national historic landmark. Real leaders in Oberlin’s African American community, the brothers were tradesman, in 1858 they participated in the Oberlin-Wellington Rescue where the organization went to rescue fugitive slave in the nearby town of Wellington that had been tricked by slave catchers to leave Oberlin (this event is significant as some 37 Blacks and White abolitionists alike were arrested and jailed for breaking the current Fugitive Slave Law), and even married free sisters, again literally, of color. Even to this day, the house is still owned by descendents of the two brothers
ADDRESS: 33 East Vine Street, Oberlin, OH MAP

Wright Park Soldiers Monument/Oberlin War Memorial
DESCRIPTION: Built in 1943, the monument and memorial stands in tribute to the African American Oberlin citizens who served in the U.S. Black Troops, and others—of a variety of races–who gave their lives during the Civil War, World War I and II, and both the Korean and Vietnam Wars.
ADDRESS: West Vine Street, Oberlin, OH MAP