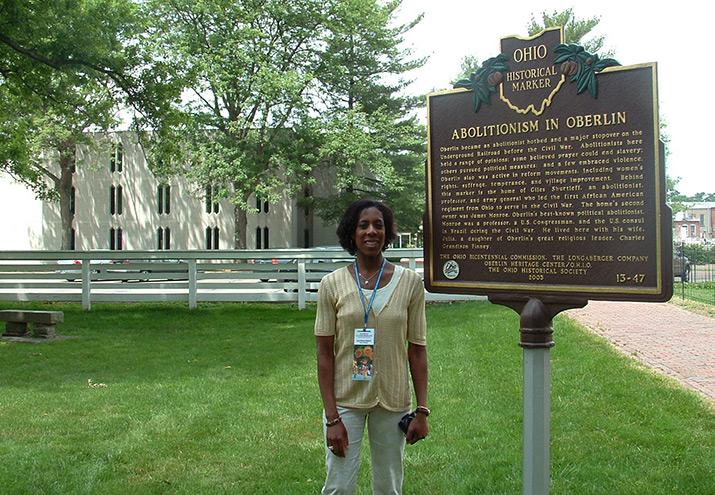 Situated in Lorain County about 40 minutes from Downtown Cleveland, Oberlin has a long and storied history relating to African Americans and the Underground Railroad. Originally founded in 1903 as the Village Improvement Society, Oberlin Heritage Center is the local repository of information for Oberlin.

Often referred to as “The town that started the Civil War”, Oberlin was founded in 1833 by a pair of Reverends that desired to “create a Christian perfectionist settlement away from the sinful world.” Accordingly, in order to live in Oberlin residents had to sign a covenant saying they were committed to plain living, homes and clothes, and would not partake of alcohol, tobacco and caffeine. Oberlin College was founded about the same time and oddly enough it was this covenant that the town folk used as a way to attract new students. Already strongly abolitionist, Oberlin invited a group of professors and students expelled from a university in Cincinnati because of their Abolitionist views, to make the town their new home. However, they agreed under the stipulation that the college be officially integrated.

Regardless of Oberlin’s open society, this was still a very radical idea for Northeast Ohio. The motion barely passed the college board of trustees and when it did, one of the town founders left. But to the town’s credit, they defied expected “White Flight” and Oberlin continued to thrive. As more and more folks flocked into town, Oberlin’s fame grew at the forefront of the Abolitionist Movement. It eventually serving as Stop #99 on the Underground Railroad.

Today it is home to about 5,000 year-round residents (more when school is in session) and possesses an approximately 25% African American population. Visit Oberlin Heritage Center to start your historical exploration is at the Oberlin Heritage Center, continuing on to any of these historic, fascinating and enlightening points of interest. On the property are three historic buildings: Monroe House, the Little Red Schoolhouse and Jewett House.

Monroe House, the Heritage Center main office, was built in the 1866 and reflects the Italianate style of architecture. Its claim to fame is that it was originally the home of the first African-American regiment from Ohio to serve in the Civil War. General Giles W. Shurtleff was their leader. In 1870 Abolitionist James Monroe took up residence here for many years. In addition to Monroe’s success in helping African Americans escape to freedom and earn voting rights, he was a five-term U.S. Congressman, a professor at Oberlin College, a founder of the Republican Party in Ohio and served as a U.S. Consul in Brazil.

Exhibits include photos and other artifacts and memorabilia related to Frederick Douglas; the Oberlin Volunteer and Rescue organization that saved escaped slaves from bounty hunters and other pro-slavery advocates; an Oberlin Anti-Slavery Society plaque; townsfolk who fought with John Brown, famous for his participation in the raid on Harper’s Ferry. John Mercer, the great-uncle of Langston Hughes; and 127th Ohio Voluntary Infantry/5th US Colored Troops, and the first African American Civil War regiment in Ohio.

Built in 1836, the Little Red Schoolhouse was Oberlin’s first public school. Restored in 1958 and moved to present site in 1997, the building stands in tribute to its unprecedented history, of begin interracial living from its inception in open defiance of Ohio’s “Black Laws.” Its most famous student was former Amistad slave ship passenger Sarah Margru Kinson.

Built in 1884, the Victorian Jewett House holds exhibits relating to and life in the late 1800s to early 1900s, the history of Oberlin College and social reforms of the day and the discovery, by one of the residents of the home, of the cost-effective process for commercially manufactured aluminum – an integral component of the industrial movement in the U.S. at that time.

The Heritage Center staff also offers guided and group tours several days a week, covering topics such as Oberlin’s early founding, its African-American history, Abolitionist and other movements including its position along the Underground Railroad, women’s history and a great deal more. 73-1/2 South Professor Street, 440-774-1700; http://www.oberlinheritage.org