Soul Of America > US Cities > Cincinnati > First to Celebrate Emancipation 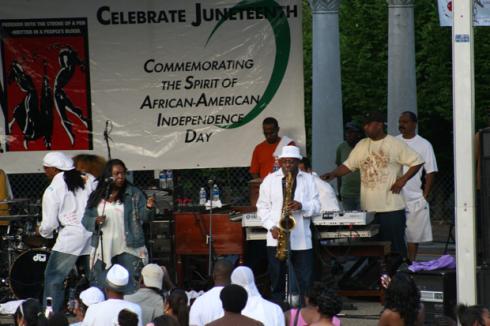 Ohio is the first to First to Celebrate Emancipation. Just before summer kicks off, consider the opportunity for your family to celebrate and commemorate the freedom of our ancestors in two special parts of the country. A little known fact is that on September 22, 1862, President Lincoln issued the 1st Executive Order that to free slaves in the South. This was cause for spontaneous celebration for many places across the North, particularly in Gallipolis, Ohio, located about 80 miles east of Cincinnati on the north bank of the Ohio River. Gallipolis started their spontaneous celebration before the 2nd Executive Order, issued on 1 January 1863, that named ten specific states where it would apply.

To celebrate the Emancipation event with historic flair, consider Ohio for your family reunion on Juneteenth holiday. Columbus, Ohio is home to one of America’s largest Juneteenth celebrations with nearly 150,000 attendees. For more information, see http://www.juneteenthcincinnati.org/