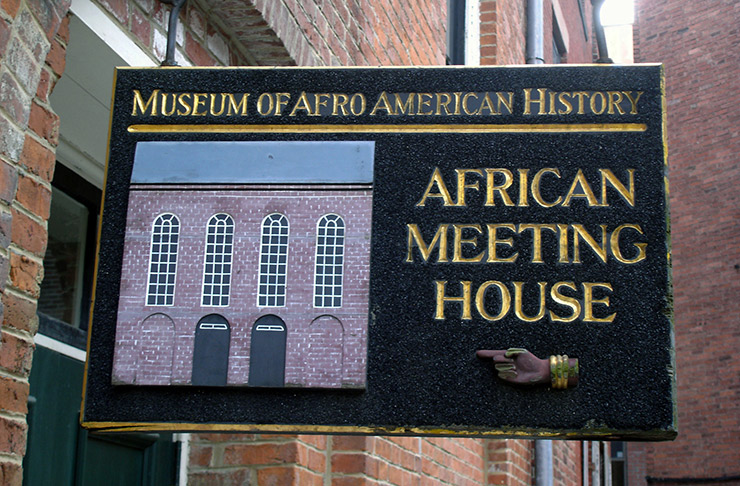 Robert Gould Shaw & U.S. 54th Regiment Memorial
DESCRIPTION: When President Lincoln admitted black soldiers into the Union forces in 1863, the 54th Regiment of Massachusetts Volunteer infantry was the 1st black regiment recruited in the north. As the movie Glory depicted, Robert Gould Shaw, a young white officer volunteered for its command. The 54th Regiment trained in what is present day Hyde Park area of Boston. On 18 July 1863, the 54th wrote history with their assault on Fort Wagner in Charleston, SC. Sergeant William Carney’s bravery saving the flag despite three wounds earned him the distinction of 1st African American to be awarded a Congressional Medal of Honor. This tall bronze relief was sculpted by August Saint-Gaudens and erected in 1897.
ADDRESS: Boston Common, Beacon Street across from State House, Boston, MA MAP
PARKING: public garages nearby
RAPID TRANSIT: Park Street Metro Station

William Lloyd Garrison Statue
DESCRIPTION: Honors one of the chief abolitionists of his day. The Liberator newspaper, first published by Garrison in 1831. For years it was the primary voice of the Abolitionist Movement; the fiery, uncompromising Garrison and many of his loyal readership who assisted in the Underground Railroad, are compelling examples that a number of European Americans were committed to the freedom and rights of African Americans. Sculptor Olin L Warner’s piece was dedicated in 1885.
ADDRESS: Commonwealth Mall between Exeter Street & Dartmouth Street, Boston, MA MAP
PARKING: public garages nearby
RAPID TRANSIT: Copley Metro Station

Asa Phillip Randolph Memorial
DESCRIPTION: An exquisite major memorial to America’s greatest civil and labor rights organizer and leader, Asa Phillip Randolph (1889-1979) in one of Boston’s two major train stations. Sculpted by Tina Allen, the 6 foot tall bronze memorial on a 2 foot tall circular pedestal details a man with a pencil contemplating his next plan; inscribed on the pedestal are Randolph’s words “Salvation for a race, nation or class must come from within.” He was born to an AME church reverend and mother in Crescent City, Florida who taught him lessons of leadership from Hannibal, Crispus Attucks, Nat Turner, Harriet Tubman and Frederick Douglass. After the Brotherhood of Sleeping Car Porters was founded in 1921 by Ashley Totten, Randolph quickly rose to head the organization in 1925. Though best known for organizing great marches on Washington in 1941 and 1963, Randolph has a lasting impact today for advancing the labor rights of all Americans. He was the first African American to successfully negotiate labor contracts with one of the largest employers in the first half of the 20th century, Pullman Car Company. He led the Brotherhood of Sleeping Car Porters acceptance into the AFL-CIO with full member rights.
ADDRESS: 145 Dartmouth Street inside Back Bay Station, Boston, MA MAP
PARKING: public garages on premises
RAPID TRANSIT: Back Bay Metro Station on premises

Emancipation Monument
DESCRIPTION: In the same triangular park as the Harriet Tubman Monument finds another statue that is equally moving. It honors “African American freed persons who by their courage and valor gave meaning to emancipation. This sculpture by Meta Veux Warrick Fuller (1877-1968) was completed in 1913, but was rededicated here.
ADDRESS: Columbus Ave at West Newton, Boston, MA MAP
PARKING: on street
RAPID TRANSIT: Massachusetts Avenue Metro Station

Harriet Tubman Monument
DESCRIPTION: A magnificent 9 foot tall bronze statue depicts Harriet Tubman leading slaves to freedom on the Underground Railroad. Harriet’s three dimensional image appropriately projects Harriet ahead of those she leads to freedom. Harriet was born in eastern Maryland, where she led most of escape sojourns for over 300 slaves, and takes them to freedom in Canada, she did this despite a huge bounty placed on her head by slaveholders. For her brave and selfless heroism she has lovingly earned the nickname “Black Moses.” Sculpted by C. Cunningham, the monument was dedicated in 1999 on Triangular park-like setting in the historic core of Black Boston.
ADDRESS: Columbus at West Newton, Boston, MA MAP
PARKING: on street
RAPID TRANSIT: Massachusetts Avenue Metro Station

Roxbury Center for Arts
DESCRIPTION: Newly renovated and located at Hibernian Hall in Roxbury; the Underground Railway Theater. It has presented works such as, Are You Ready, My Sister?, a historical adventure story about Harriet Tubman.
ADMISSION: Free, except during some special events
DAYS & HOURS: daily, but special events are typically at 7p
ADDRESS: 184 Dudley Street , Boston, MA MAP
PHONE: 617-541-3900
PARKING: on street
RAPID TRANSIT:
WEBSITE: http://www.rcahh.org

Museum of the National Center of Afro-American Artists
DESCRIPTION: Established 1978 to compile, interpret and disseminate the culture of African Americans as defined by works of art. This estimable center has an international reputation for its interpretive work on the cultural heritage of African Americans and people of African descent throughout the world. One permanent exhibition is Aspelta: A Nubian King’s Burial Chamber, the world’s only fully accurate and scale-sized recreation of a Nubian tomb interior includes more than fifty 2600 year old objects from King Aspelta’s tomb or times. The Eternal Presence sculpture by John Wilson celebrates human creativity and spirituality from the beginning of the human family to now – he drew inspiration from the Olmec heads of ancient Mexico and images contemplating Buddhas.
ADMISSION: $
DAYS & HOURS: Tue-Sun 1p-5p
ADDRESS: 300 Walnut Avenue, Boston, MA MAP
PARKING: on premises
RAPID TRANSIT: none
PHONE: 617-442-8614
WEBSITE: http://www.ncaaa.org

Reginald Lewis International Law Center
DESCRIPTION: Dedicated to law school alum Reginald F Lewis; Lewis earned fame for the largest single gift to Harvard by an individual ($3 million); Lewis was the former owner of TLC Beatrice International, the largest company owned by an African American in the 1990s (over $1.6 billion revenue); a firebrand and Wall Street wiz who mastered the art of the Leveraged Buy Out, Lewis is perhaps best remembered for his autobiography titled Why Should White Guys Have All the Fun?, published shortly after his untimely death in January 1993.
ADDRESS: Harvard Law School Complex, Cambridge, MA