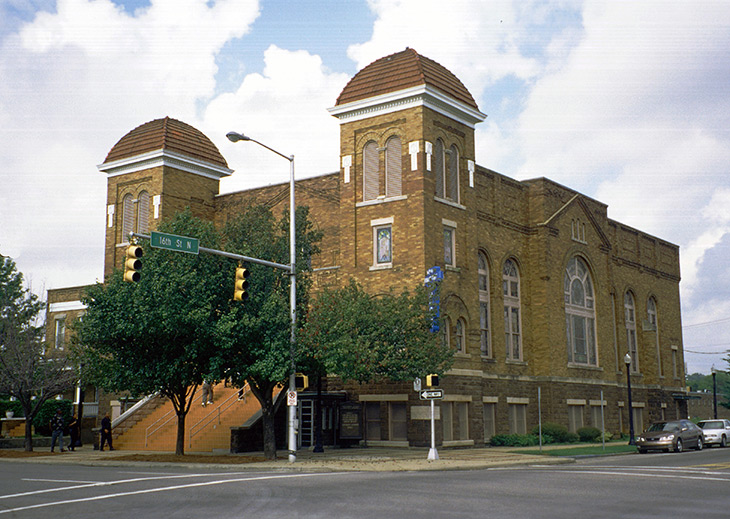 Kelly Ingram Park
DESCRIPTION: This National Historic Site symbolizes the essence of the Civil Rights Movement. Protesters organized for marches here when they were beaten by police, brutally attacked by police dogs, fire-hosed and arrested. Their nightly televised civil rights struggle between 2-7 May 1963 captivated a nation when there were only 3 national networks and you could believe what you saw on the national news. The park is named in honor of Osmond Kelly Ingram, the first American sailor killed in World War I.
ADDRESS: Bounded by 16th Street, 6th Avenue, 17th Street North and 5th Ave, Birmingham, AL MAP

16th Street Baptist Church
DESCRIPTION: Although founded in 1873, the current church was designed by Black architect Wallace A Rayfield and built by the Windham Brothers Construction Company in 1911 as the finest of its kind in Alabama. Directly adjacent to downtown and under the leadership of then Rev John H Cross, the church with a seating capacity of 1,600 lent itself to be the staging area for the civil rights protests. It was the location of a 16 September 1963 bombing that killed four little girls in the Ladies Lounge School — Denise McNair, Cynthia Wesley, Addie Mae Collins and Carol Robertson and wounded 22 others. Most historians credit the 4 martyred girls for putting a noble face on the Civil Rights Movement. Nearly $230,000 in worldwide donations poured in to rebuild the church and help the bereaved families. The front of the church has been restored and a memorial to the girls is accessible downstairs. Rev. Dr Chistopher M. Hamlin has written a book about the history of the church. In 2013, the four little girls were post-humously awarded the Congressional Gold Medal.
SUNDAY WORSHIP: 11a
ADDRESS: 1530 Sixth Avenue North, Birmingham, AL MAP
PHONE: 205-251-9402
WEBSITE: http://www.16thstreetbaptist.org

Metropolitan AME Zion Church
DESCRIPTION: Founded in 1885 under the leader of Bishop WA Stewart, with the current edifice built in 1903 and rebuilt in 1955, this church was also key to the civil rights marches played out in Kelly Ingram Park.
SUNDAY WORSHIP: 11a
ADDRESS: 1530 Fourth Avenue North, Birmingham, AL MAP
PHONE: 205-252-8503
WEBSITE: none

Bethel Baptist Church
DESCRIPTION: Founded in 1926, this small church was the pastoral home for a giant of a man, Rev. Fred Shuttlesworth, who led the Civil Rights Movement in Birmingham. Due to Rev Shuttlesworth’s constant pressure against the status quo of segregation and racism in the 1950s, this church was bombed three times and still evidences such bombings. The congregation moved to a new church.
SUNDAY WORSHIP: no services, but designated a National Historic Site
ADDRESS: 3191 29th Ave North, Birmingham, AL MAP
PHONE: n.a.

A.G. Gaston Gardens
DESCRIPTION: For many years after Reconstruction this hotel, formerly owned by A G Gaston, was the only first class lodging for African Americans visiting Birmingham. During the 1960s it was a prime meeting place for civil rights leaders. “Project C” for confrontation of Jim Crow in the Civil Rights Movement was conceived here. The hotel was bombed during the Civil Rights Movement. In restored condition, you can tour the grounds.
ADDRESS: 1510 5th Avenue North, Birmingham, AL MAP

Alabama Penny Savings Bank
DESCRIPTION: Founded in 1890, then moved to this location in 1913, it was Alabama’s first bank for African Americans one of the first three for Blacks in the nation. It was built by Windham Construction, a black owned company. The style of the building suggests the architectural touch of Wallace A Rayfield. Without this strong bank, most homes for Birmingham’s earliest African Americans never would have been built. The building also housed of the cities earliest doctors and attorneys. In 1915, the Grand Lodge Knights of Pythias, a black fraternal organization, bought the building. It is has been known as the Pythian Building since then. Listed on the National Register of Historic Places.
ADDRESS: 310 18th Street North, Birmingham, AL MAP

Freedom Riders Debarkation Site
DESCRIPTION: On 14 May 1961 African American and Anglo-American youths in the Congress Of Racial Equality (CORE) arrived here on their journey from Washington, DC to New Orleans. They were testing a Civil Rights ruling with much fanfare in the South. Klansman greeted and assaulted them here while the Bull Connor’s police force, alert to the possibility of violence, nevertheless stood by.
ADDRESS: Fourth Avenue North at 19th Street North, Birmingham, AL MAP

Smithfield Historic District
DESCRIPTION: One of the earliest Birmingham African American neighborhoods since the 1890s and on the National Register of Historic Places, this district is a notable reminder of how social and economic class distinctions were formed in the Black community. European-American civic officials zoned homes in the area for middle-class African-Americans. To be a doctor, lawyer, educator, pastor, businessperson of means was to live here. AG Gaston, one of the earliest African American millionaires, and political activist Angela Y. Davis lived in the area. A historic marker is located at Eighth Avenue and Center Street.
ADDRESS: bounded by Center Street North, Eighth Ave, 6th Street North, Third Avenue, Birmingham, AL MAP

Dr A M Brown House
DESCRIPTION: Arthur McKinnon Brown (1867-1939), one of the earliest black physicians, commissioned Wallace A. Rayfield (1874-1941) the official architect for all AME churches in America and many Fourth Avenue District buildings, to design his home. After graduating from Lincoln University, Dr Brown graduated with honors in surgery and ophthalmology from Michigan Medical School in 1891. He later founded Children’s Home Hospital, which was for many years the only hospital for Birmingham’s African Americans. He also instituted Negro National Health Week which evolved to National Health Week. The house is now a community center stewarded by the Birmingham Arts Club.
ADDRESS: 319 4th Terrace North, Birmingham, AL MAP

Tuggle Elementary School
DESCRIPTION: In 1903, Carrie Tuggle (1858-1924) founded a school and orphanage, the Tuggle Institute; she worked with delinquent boys and as a welfare officer then conceived of providing housing facilities for orphaned black children. After fundraising, she and her supporters opened a one-building school and residence for homeless black boys. Distinguished alumni include Dr. A.G. Gaston, Angela Davis, Ersking Hawkins, and John T. Whatley. Tuggle is honored in the Alabama Women’s Hall of Fame. Today the venue serves as an elementary school and her gravesite is out back.
ADDRESS: 412 12th Court North, Birmingham, AL MAP
PHONE: 205-231-2675

Angela Y. Davis Residence on Dynamite Hill
DESCRIPTION: The famous political activist, feminist, socialist and professor Angela Y. Davis (1994-) hails from this neighborhood when her family moved here in 1948. Newspapers gave her neighborhood the name “Dynamite Hill” when the KKK drew a racial dividing line by bombing over 20 homes from 1955 onwards in a white residential section that started selling more homes to black families. Police Chief Eugene “Bull” Connor had a lack of interest in catching and prosecuting the perpetrators. In fact, infamous Chief Connor was so bad he even asked Reverend Fred Shuttlesworth to take a lie detector test to clear his name in the bombing of his own house in Dynamite Hill. In that racial climate spawning from this district, Birmingham became infamously known as “Bombingham.”