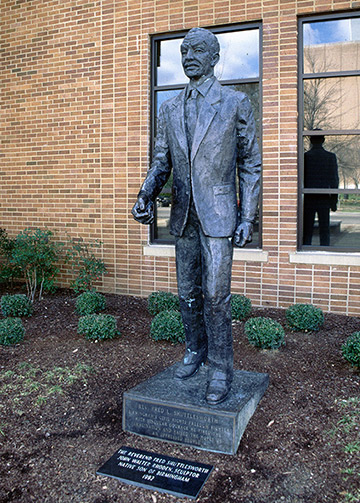 Rev. Fred Shuttlesworth was the most important figure in the Birmingham Civil Rights Movement. In the 1950s, he was pastor of Bethel Baptist Church located some distance from downtown. In response to Alabama outlawing the NAACP within the state, he sidetracked the law by forming the Alabama Christian Movement for Human Rights (ACMHR), which gave the Civil Rights Movement a legal foundation in Alabama.

By 1960, Birmingham became Ground Zero for Confrontation in the Civil Rights Movement when a plummeting steel market and job loss played right into the hands of evildoers. The Klu Klux Klan (KKK) galvanized poor European Americans against African Americans and Jewish Americans. Birmingham’s other citizens stood by as churches and homes in the Black and Jewish communities were bombed. Birmingham had so many church bombings from 1957-1964 that it had a well-earned nickname, “Bombingham.” Definitely not the marketing slogan civic boosters wanted.

In that combustible environment, courageous African Americans, Jewish Americans and handfuls of European Americans repeatedly marched to overthrow Jim Crow laws. They were attacked and jailed by Police Chief Eugene “Bull” Connor’s thugs with badges. Arrested for protesting, Rev. Dr Martin Luther King, Jr. wrote his famous “Letter From a Birmingham Jail” here in 16 April 1963. Perhaps no other place in Birmingham honestly examines the recent past and the possibility of civil reconciliation between all Americans.

Between 2-7 May 1963, in what is now Kelly-Ingram Park, protesters were fire-hosed, beaten by police, attacked by dogs and arrested. Nightly news television garnered huge ratings by reporting this civil rights struggle, bringing national and international condemnation upon the inhumanity of Birmingham. TV broadcasts and photojournalists visually demonstrated several things that stirred average European Americans to make the Civil Rights Movement a national issue.

• White sympathizers in the movement were often clergy and women
• White news journalists and cameramen were harassed and beaten with the cameras running
• At best, white hecklers and policemen came across as uncouth; at worst, they came across as violent heathens

Touched by what they saw, more White Christian clergy from North joined in the protests. The Civil Rights Movement elevated to the level national discussion every news night.

Fearing the publicity disaster occurring in Birmingham, some other cities of the South, like Atlanta, began incremental steps to desegregate. Nevertheless, the John F. Kennedy Administration foot-dragged on a national initiative to end Jim Crow. At times President Kennedy appeared to be more concerned about losing White Southern votes in the upcoming 1964 elections, than pushing for legislation to end the madness. International geo-politics played a hand that help JFK do the right thing.

Paul Robeson and W.E.B. DuBois had criticized America’s racist practices in every speech abroad for years. Though at the forefront alerting members of the United Nations General Assembly of America’s dirty hypocrisy, they were ex-patriots with less influence in America. By 1963, Dr Martin Luther Ling, Jr. and Malcolm X had become international icons. Their criticism of American leadership for lacking the moral courage to end Jim Crow was amplified each night with news images from Birmingham and their ongoing news coverage in America. The oratory Martin and Malcolm drew the ire of J Edgar Hoover, FBI Director, who considered them to be unpatriotic and dangerous.

The USA could not risk so many African, South American and Asian countries unshackling from Colonialism in the 1960s, only to choose Communism over Democracy as their new form of government. Democratic countries were too important to America and Europe in terms of international trade and natural resources. So American diplomats desperately sought sympathetic ears within the United Nations when they pushed themes concerning the “Merits of Democracy” and “Land of the Free.” But whenever US diplomats made those hypocritical statements in the UN General Assembly, the Soviet Union countered in stark rebuttal by referring to pictures from Birmingham news events. Who do you think sounded more convincing?

With so many news reports and Black leaders calling out the racial crisis in America, even European leaders, to protect their foreign interests, began putting pressure on American diplomats, Congress and the President. Each day America, or specifically, President John F Kennedy, allowed such “cuts-deep-because-its-true” criticism without taking action only played into the Soviet Union’s hand to attract nations to Communism. JFK also had plenty of geo-political motivation from the Cuban Missile Crisis of 1962. It amply demonstrated that third world countries can rapidly become staging grounds for the Cold War to escalate into a Hot War.

Walking a tightrope between national and international interests, the erstwhile JFK chose his US Attorney General brother, Robert Kennedy to send in federal troops and prevent Bull Connor’s goons and the rioters from getting out of hand in Birmingham. Federal troops helped keep the peace while JFK bought time to figure out when to push for new Civil Rights legislation. Gathering moral courage, on 11 June 1963 Kennedy made the first speech by a President stating the need for civil rights legislation and Dr. King, A. Philip Randolph and Bayard Rustin announced plans for a March on Washington. That night Medgar Evers was murdered in Jackson, Mississippi, also making the next day news.

On 19 June 1993, JFK sent Congress a Civil Rights bill, which offered federal protection to African Americans seeking to vote, to shop, to dine out, and to be educated on equal terms. This nationally televised event was broadcast in the homes of all Americans. From that day forward, JFK was cemented in the hearts of African Americans as our first presidential Civil Rights leader and led many of them to hang his picture in their home.

Not content with the political gamesmanship in Congress that stalled Civil Rights legislation, A. Philip Randolph and Bayard Rustin made good on their threat to organize civil rights, labor, and religious groups for the massive March on Washington on 28 August 1963. Despite how we think of the iconic I Have A Dream speech by Dr King today, in actuality the march did little to advance the movement. Many Southern politicians resented the marchers attempting to force their hand. Consequently, JFK’s proposed legislation stalled in Congress. The Civil Rights Movement needed more powerful accelerants. Unfortunately, they were deadly.

The first accelerant occurred at 16th Street Baptist Church. The church, adjacent to downtown Birmingham with a seating capacity of 1,600, was the staging area for protests directed towards local government and merchants. At the 16 September 1963 church bombing, four little girls in the Ladies Lounge (Denise McNair, Cynthia Wesley, Addie Mae Collins and Carol Robertson) were killed. The blast, caused by 19 sticks of dynamite, also wounded 22 others. The passionate eulogy by Rev. Fred Shuttlesworth was too overwrought to be described by a reporter’s pen. That day forward, Birmingham’s White clergy joined with Black clergy in the funeral procession, signaling that the Civil Rights Movement had finally engaged White Southern clergy, other Southern sympathizers and Hollywood celebrities.

Most historians credit the four martyred little girls for putting a noble face on the movement that finally touched the conscious of most European Americans. Even the most stubborn European Americans had to acknowledge racism was out of control in Birmingham and the South. Nearly $230,000 in donations poured in to rebuild the church and help the bereaved families. 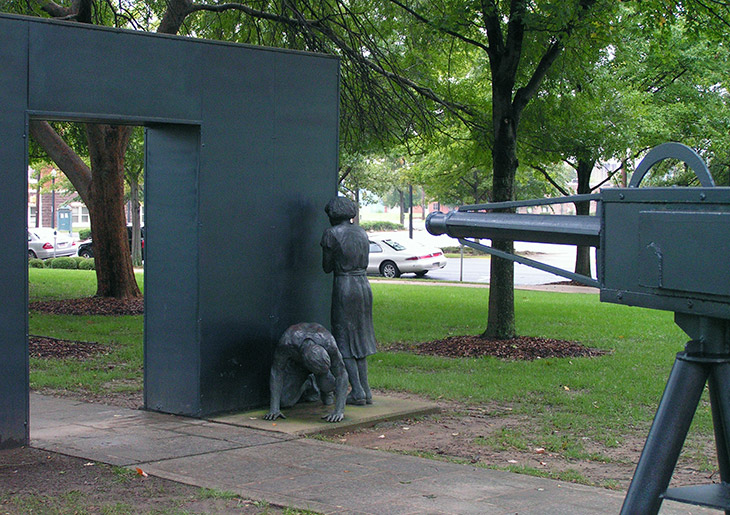 One should not underestimate the impact of awarding Alabama hundreds of millions of dollars for military bases, a NASA center, schools and colleges in Birmingham and Montgomery. Thus, for Alabama politicians and other white Southern politicians, agreeing to Civil Rights legislation in the 1960s became a clear-cut choice of carrot or stick. Be rewarded for accelerating inevitable racial desegregation or have the federal government and Northern business pass by. But old habits caused Birmingham leadership to move slower than Atlanta or Charlotte in the 1970s. That partly explains why both cities leaped ahead of Birmingham as linchpin cities of the New South. They became magnets for new business.

Fortunately, the 1980s and 1990s, under leadership by Mayor Arrington, Birmingham got with the New South program. Today, Kelly Ingram Park, site of several civil rights confrontations hosts a series of monuments to those troubling times and the sacrifices made to overcome.