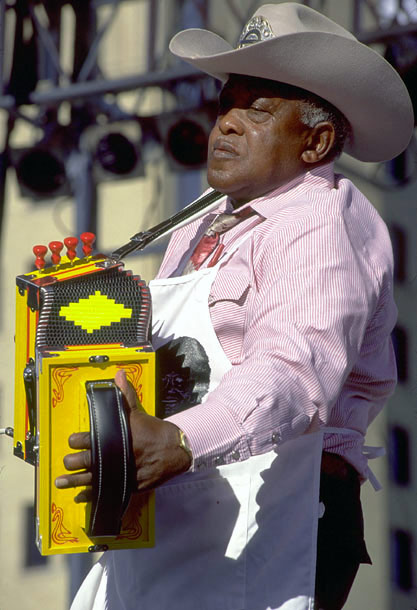 Zydeco Music is derived from the phrase “les haricots sont pas salés” which means, “the snap beans are not salty.” But as you’ll read in this summary, the musical background is a lot spicier. Zydeco music began when Acadians arrived in Southwest Louisiana in 1764. They brought music that originated in France, but was tempered in Nova Scotia through interaction with Native Americans and British settlers. Since lyrical music is often about day-to-day concerns and aspirations, those lifestyle stories were changed to refer the Southwest Louisiana lifestyle and gathered new influences from Native Americans in the region. The fiddle, stomping and clapping supplied melody and rhythm.

As slave plantations and free persons of color expanded into Southwest Louisiana, African rhythms, vocalization patterns and lifestyle stories joined the mix. Considering that Spaniards controlled most of the area until 1801, they also contributed a few guitar melodies to what became known as Zydeco Music. The music evolved to captures audiences with contradanses, gigues, and polkas among other techniques. The accordion was introduced by German immigrants in the late 1800s, but was not popular because its sound did not carry well. By the early 1920s, accordions were tuned in C and D notes, allowing the notes to carry better in large and loud dance halls. The fiddle however, remained a staple of genre due to its wider musical range.

African American influence in Zydeco Music grew each decade, though its hard to say what aspect came first, since most of it was not recorded. A number of music historians note that melodies built around a refrain that enabled singers and collective dancing, is common to West African culture. Most Cajun vocalists added a high-pitched singing style to match the musical key and to carry across the dance floor.

Though older less commercial Zydeco styles continued at family gatherings, from late 1920s to about 1950 radio and recordings captured Cajun-style Zydeco Music for sale and promotion outside Louisiana. During the birth of radio mass media, the genre developed widely recognized stars who shepherded the music to maturity:

Clifton Chenier, strongly influenced by musicians playing rub boards and triangles provided rhythm, ascended to become the most recognized figure in the genre. After moving to Texas, Chenier learned to play accordion in the late 1940s. He and his brother, Cleveland who played the washboard, performed at Texas and Louisiana nightclubs, Zydeco became popular from Houston to New Orleans. Cleveland Chenier began using corrugated tin, played at first with spoons and bottle openers. The story goes, Clifton had a Port Arthur metal worker shape a board with shoulder straps, inventing the frottoir, a trademark instrument of Zydeco.

Black independent record producer, J.R. Fulbright, recruited Chenier to make his first recording at Lake Charles, Louisiana. Eventually, Fulbright influenced Chenier to move to Los Angeles. Once there, Clifton Chenier joined Specialty Records. As his record sales took off, he became famous for blending French Creole music with Blues and R&B, and creating a new musical genre that acquired the name Zydeco. With rare exceptions, the fiddle has lost its place of primacy in Zydeco. But Clifton Chenier identifies the musical meaning of it in his signature song, “Zydeco Sont Pas Salé,” recorded in 1965 at Gold Star studio in Houston.

In 1964, Gladius Thibodeaux, Louis “Vinesse” LeJeune, and Dewey Balfa represented Louisiana performing traditional Cajun music at the Newport Folk Festival, Zydeco musicians have been invited ever since. In 1974, CODOFIL organized the First Tribute to Cajun Music Festival in Lafayette, an annual gathering that has become Festivals Acadiens.

All musical genres evolve to address popular influences. So we shouldn’t be surprised that an artist, Wayne Toups, coined the term Zydecajun to describe his fusion of Zydeco and Rock music. Anyone who knows the Black communities of California knows there are a lot of Louisiana immigrants who brought Zydeco and Creole Food with them. And they buy records. In fact by 1982, San Francisco-based Zydeco Queen Ida Guillory won a Grammy for a 1982 album. Clifton Chenier achieved worldwide celebrity status performing during the closing ceremonies of the 1996 Atlanta Olympics.

Hopefully, this condensed summary leaves you hungry for a lot more Zydeco history, there are plenty of books to purchase on the subject and websites to visit. But know that many younger Zydeco bands now perform only in English. Some incorporate Hip-Hop lyrics. Others even record songs in Creole French, which is close to its musical roots. In the 21st century, Zydeco remains as dynamic and vibrant as ever, with artists like Rockin’ Doopsie keeping Zydeco alive for younger generations.