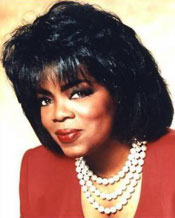 Baltimore represents a major milestone in Oprah Winfrey’s career. In 1976, WJZ TV station was looking for someone to extend its appeal to Baltimore Metro Area’s half million black population and its female audience. An energetic age 22 Oprah Winfrey arrived from Nashville to become a news reporter and co-anchor on WJZ.

With a toothy smile and large Afro hairstyle, no one could imagine that Oprah’s Baltimore Milestone lie ahead.

Female audiences liked her emotional involvement in on-scene news reports. But for many, if not most male viewers, Oprah’s presentation style was distracting. That segment of the audience preferred Oprah or someone else to dispassionately report the news. Rather than perceive bifurcated audience reaction as a reason to fire her, station producers saw opportunity. They bet that Oprah had a special talent to host a successful talk show.

When approached by the TV station’s producer to host a talk show, many concerns ran through her mind. Hiring managers in her profession might view such a change as a demotion from her career track to news anchor in the largest TV markets. But after considering all the ramifications, Oprah followed her heart and accepted their offer in 1978. As a safety net, she continued as TV co-anchor for a time.

Oprah’s first TV talk show, People Are Talking, outperformed everything in its timeslot. Something else happened. TV ratings and surveys indicated that the audience saw her as a talk show host, not as a black talk show host. Word of a crossover hit gets around the TV industry. So in 1984, Oprah received a call she couldn’t refuse from a major TV producer in Chicago. And the rest is history on many levels for Oprah