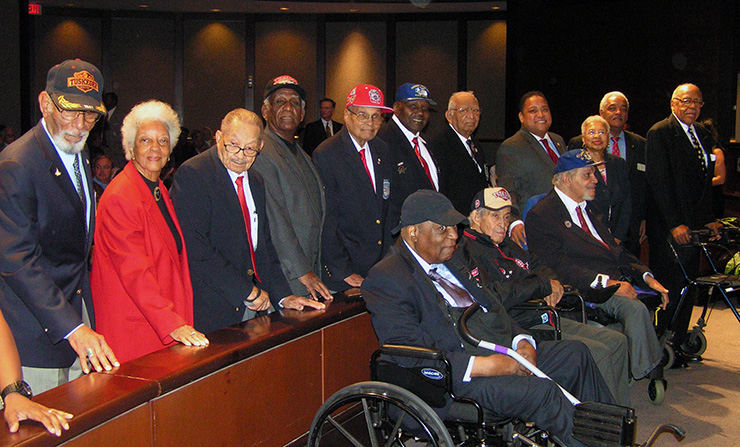 With the release of Red Tails movie produced by George Lucas and Anthony Hemingway, the Tuskegee Airmen finally started getting the recognition they deserve. Hats off to Atlanta for honoring Tuskegee Airmen, the Real Deal.

The 99th Fighter Squadron’s exemplary performance in Italy and North Africa during World War II earned them respect, and in 1948 President Harry S. Truman issued an executive order to eliminate segregation in the U.S. military. His executuve order was more important to the Civil Rights Movement than Jackie Robinson breaking the baseball color barrier in 1947, because it enabled the modern military.

As the Tuskegee Airmen celebrated their 70th anniversary in 2012, Atlanta Councilman Michael Julian Bond honored the surviving local men and women who were a part of the experiment to prove that blacks were just as capable of becoming fighter pilots as whites.

“This is a great American story that new generations need to know. Our children have a lot less barriers today, but they are still stumbling. So they need to see more accurate images of themselves and what they can accomplish. The Tuskegee Airmen soared beyond all expectations” exclaimed Bond.

This was the first time that the city of Atlanta has honored the Airmen. About 20 Tuskegee Airmen and their friends and families attended the ceremony, including Val Archer, who was an instrument technician from 1945 to 1949.

“We have a wonderful legacy of achievement and patriotism, and I feel we were key to the decision by President Truman to issue Executive Order 9981 to desegregate the armed forces,” said Archer.

“We had no idea how historic it would be, but as graduates from Harlem Hospital, three of us decided we had to be at Tuskegee. We knew that if black men were going to be airmen, we needed to be their nurses to take good care of them,” said Irma Cameron “Pete” Dryden.

Dryden was with the Nurse Corps from 1943 to 1945. She was the first wife of famous Tuskegee Airmen, Charles Dryden, who died in 2008. “I met him my first day there at a party at the officer’s club to say goodbye to the men flying overseas. After only one day, I couldn’t bear to be away from him. When he got back six months later, we were married,” she laughed.

Many didn’t know that the famously cantankerous radio DJ and TV talk show host, James “Alley Pat” Patrick, was also a Tuskegee Airman — he worked the Post Exchange from 1942 to 1945.

When asked what that time was like during WWII and segregation, Wilbur Mason, who was a civilian Airman from 1943 to 1947 said, “I was from Tuskegee, so I was used to segregation and it didn’t affect me as badly as it did my fellow Airmen from the North. But the history of African Americans in the military rested on our shoulders. We proved that Blacks were not inferior and paved the way for people like former Chairman of the Joint Chiefs of Staff and Secretary of State, Colin Powell.” 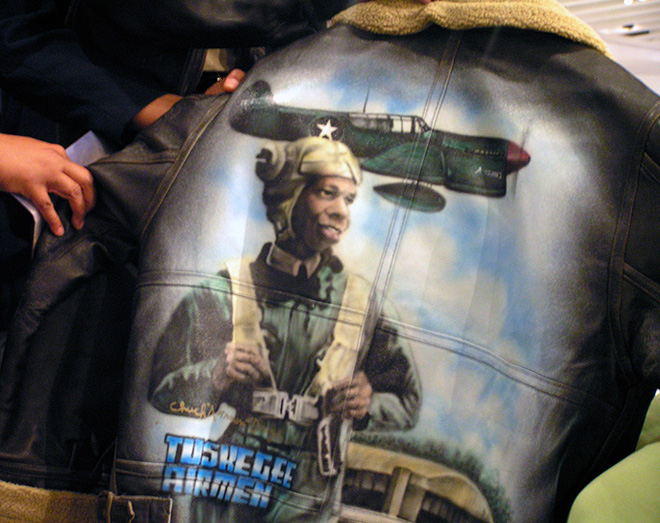 Even with the racial barriers and challenges they faced, Airman Ray Williams, who was a fighter pilot from 1943 to 1946 exclaimed, “It was the most exciting time of my life! And it’s a wonderful feeling to get these accolades today.”

Dr. Lisa Bratton, who is chairperson of the Atlanta chapter’s scholarship committee, interviewed hundreds of Tuskegee Airmen when she was an oral historian for the National Park Service. “So many of the Airmen grew up here during segregation, so they’ve come full circle to be honored by the city that once discriminated against them,” said Bratton.

As members of the Atlanta Chapter, many of the Tuskegee Airmen speak at schools and churches to educate the community about their history. They also have an annual collage scholarship fundraiser and the ACE Camp, which teaches youth about aviation.

“Our main goal is to get our story into school textbooks. So we put out a challenge to the education system and the publishing industry to correct that deliberate slight” said Archer.