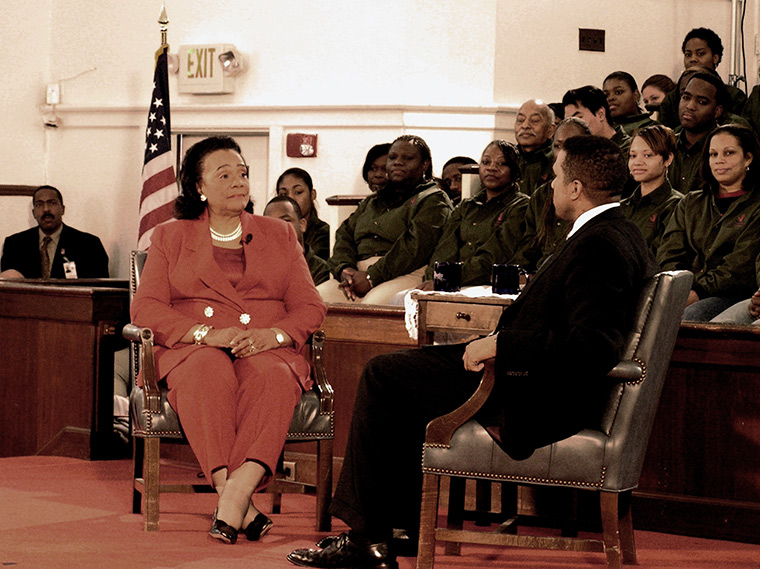 Atlanta has a plethora of black historic sites, including some that pre-date the rise and influence Martin Luther King Jr. They are a significant reason many African-Americans consider this city in the Deep South to be the Black Mecca.

Martin Luther King, Jr. Center for Non-Violent Social Change
DESCRIPTION: This National Historic Landmark is the most photographed site in Atlanta. When observing the dual tomb set amidst a reflecting pool, you reflect upon the historic and inspirational lives of Dr. Martin Luther King and Coretta Scott King. Dr. King, who died in 1968, was buried in a typical cemetery until his body was re-interred here under a single tomb in 1977. In 2006, Coretta was interred beside her husband, making a dual-tomb necessary. An exposed hall surrounding the pool depicts interesting aspects of the lives of Martin and Coretta. The Center for Non-Violent Social Change complex includes Freedom Hall, which contains over 2 million documents and personal artifacts of the King Family. The center has an ongoing mission to manage non-violence programs for kindergarten through graduate school and seminars to lead youths away from gangs.
ADDRESS: 449 Auburn Avenue, Atlanta, GA MAP
PHONE: 404-524-1956
WEBSITE: http://www.thekingcenter.org

Citizens Trust Bank
DESCRIPTION: Founded 1921; this bank is the nation’s 4th largest bank on the 2001 Black Enterprise listing; it should be acknowledged for its foresight acquiring other banks to spur faster growth and broaden customer services.
ADDRESS: 75 Piedmont Avenue, Atlanta, GA MAP
PHONE: 404-659-5959

Odd Fellows Building
DESCRIPTION: This historic building was home to many Black businesses in the early days of Sweet Auburn; today there are a number of small businesses returning.
ADDRESS: 228-250 Auburn Avenue, Atlanta, GA MAP

Herndon Building
DESCRIPTION: Built in 1931 by Alonzo F. Herndon, it was home to as 121 African American businesses and 39 professionals during the Depression era and extending in the 1950s.
ADDRESS: 231-245 Auburn Avenue, Atlanta, GA MAP

Butler Street YMCA
DESCRIPTION: Founded in 1894 in the basement of Wheat Street Baptist Church; a local activist group met at this location prior to 1920 when the original YMCA building was erected for and by African Americans. The new YMCA is across the street.
ADDRESS: 20-24 Butler Street, Atlanta, GA MAP
PHONE: YMCA 404-659-8085

Fire Station #6 Museum
DESCRIPTION: Built in 1894, this fire station served the first in Sweet Auburn until 1991. Learn about the desegregation of the Atlanta Fire Department and view a 1927 American LaFrance fire engine at the museum. Although it closed in 1991, it reopened in 1996 as a museum managed by the National Park Service.
DAYS & HOURS: daily 10a-5p
ADDRESS: Boulevard at Auburn Avenue, Atlanta, GA MAP
PHONE: 404-331-6922

Booker T. Washington High School
DESCRIPTION: Opened in 1924 and named for the great Booker T. Washington (1856-1915), it was the first Black public high school built in Atlanta; has produced Dr. Martin Luther King, Jr. and Romae T. Powell, judge; Dr. Asa Yancy, surgeon and many other outstanding graduates; remained the only Black high school in the city until 1947; a Booker T. Washington Monument was added to the front in 1927; listed on the National Register of Historic Places; since the school is in use, its not open for tours.
ADDRESS: 45 Whitehouse Drive, Atlanta, GA MAP