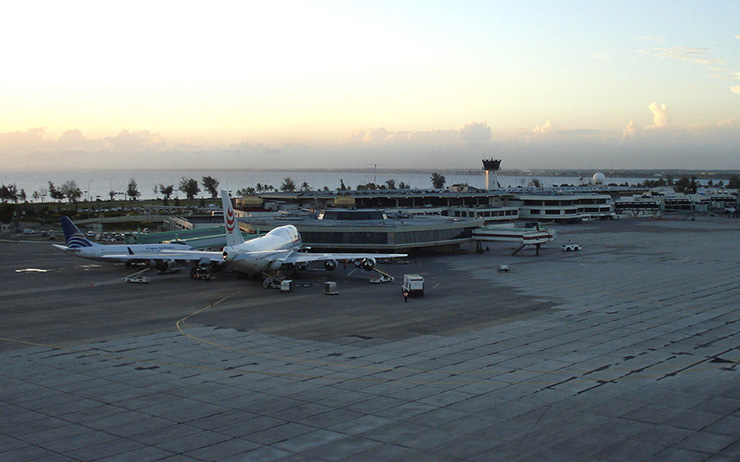 Las Américas has five gates on the main satellite concourse. Terminal B now features a co-branded Copa Club operated jointly by United Airlines and Copa Airlines, and a Private Lounge exclusive to members and business people. The airport was modernized, two more terminals were added with 20 more gates. Daily flights in and out of Las Américas Airport range between 68 and 84 flights. JetBlue, Aeromexico, Air France, American, Avian, Condor, Delta, Spirit and United are major airlines operating at Las Américas. Terminal B is the newest Terminal filled with amenities. The Copa Club lounge is located at Terminal B near gate B4. Its daily hours are 5am-7pm. Terminal A has a Sala VIP Caribe Lounge located airside to watch planes come and go. Services and facilities at both Terminals include:

Several companies provide shared van service to/from the airport to city centre or to any other destination in the area. Driving a rental car can be tricky — traffic in many parts of the country is very fast paced. Rental rates are less during the fall months. The new expressway crosses a new suspension bridge which spans the Ozama River, connecting traffic into the city’s Elevated Freeway and Tunnel system. You’ll find the following Car Rental counters at Santo Domingo Airport located at the Terminal North: