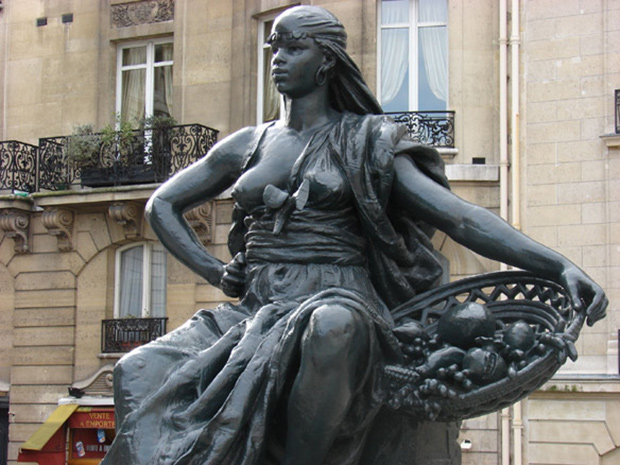 L’Afrique in front of Musee d’Orsay

Paris has a feast of Black Images at Orsay Museum, including marble statues and several of the finest Impressionist paintings. Some are by people of African descent; others by people of European descent.

Europeans have portrayed Africans and persons of African descent in their art since ancient times. Their depictions range from crude and stereotypical to sensitive and respectful, depending on the era during which the works were created, the circumstances that prevailed at the time the artist created each work, and the personal opinions of the artist regarding black people and their place in the world. Images of blacks in paintings and sculptures may be found in many of Europe’s finest museums if one only takes the time to look for them. 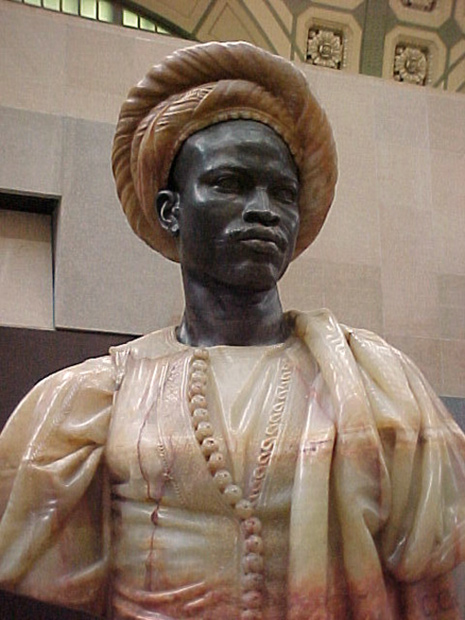 During the 19th century, when France and other European countries were pushing across Africa in one of the biggest land grabs in history, Cordier embarked upon an artistic mission that would eventually earn him a place in the Legion of Honor. He sculpted at a time when Europeans had a keen interest in ethnology, the study of the division of mankind into races, origins, and characteristics. Scientists endeavored to categorize and rank the races of the world; the theories that emerged encouraged a belief in a superior European civilization and permitted governments to justify colonial expansion and imperialism.

Cordier wanted to contribute to ethnology through his art. But in contrast to the prevalent doctrine of European superiority, he believed that “beauty is not specific to a privileged race” and viewed his work as a means of introducing the concept of “the ubiquity of beauty” to the world. He was the only 19th century sculptor to devote time and talent to represent human diversity. None of his works reveal a trace of caricature. All of his subjects are treated with quiet elegance and dignity, regardless of their ethnic background.

After spending time in Algeria “to study different types of the indigenous human race” from an artistic perspective, Cordier began to create sculptures from a combination of materials—marble, bronze, and Algerian marble-onyx. Le Nègre de Soudan (1856) and la Capresse des Colonies (1861) represent two such works. They are on display in the nave on the ground floor, adjacent to Jean-Baptiste Carpeaux’s Les Quatre Parties due Monde Soutenant la Sphere Celeste (The Four Parts of the World Holding the Celestial Sphere [bronze, ca. 1872]). 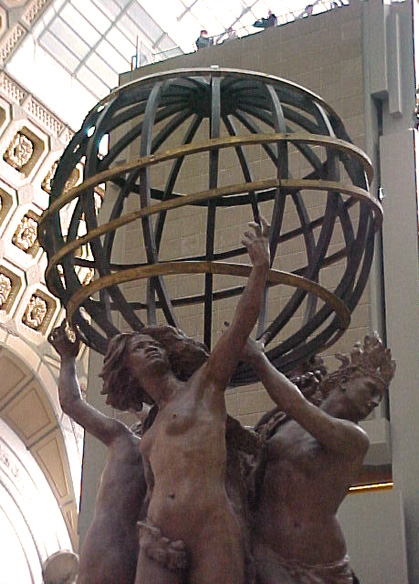 Carpeaux’s sculpture is another of the Musée d’Orsay’s works that depict a black person. It is a plaster model of the bronze statue, commissioned by the city of Paris, which sits atop a fountain located in the Jardin Marco Polo south of the Luxembourg Garden. A woman representing the African continent lifts and supports the world with the help of women from three other continents—Asia, Europe, and America. The African woman is clearly identifiable by her facial features, her coarse hair, and the shackle that encircles one ankle. The sculpture makes reference to the abolition of slavery in the broken chain that is attached to the shackle, which treads upon by the figure representing America (depicted as an Indian). Terra cotta and plaster models for the sculpture can be found in the Galerie Lille, adjacent to the nave on the ground floor.

Also in the Galerie Lille is a work entitled Négresse Accroupi Révoltée (terra cotta, 1867), which Carpeaux created as part of his preliminary work on Les Quatre Parties du Monde. A related work is a terra cotta bust of an African woman entitled Pourquoi Naître Esclave? (Why Born a Slave? [1868]), which can be seen at Paris’ Petit Palais museum. These works were created shortly after the end of the Civil War in the United States and the emancipation of American slaves.

Turning to paintings, Edouard Manet’s celebrated Olympia (1863, oil on canvas) has been said to depict a black person for no other reason than the aesthetics of color. To paraphrase Emile Zola, who spoke with him about this work, Manet wanted zones of black in the painting and chose to use a black cat and a Negress servant to fulfill this desire. He uses these dark figures, and a somber background, to contrast with the dominating pallor of the skin of the young white prostitute who is the subject of the painting and the white bed linens upon which she lounges. Zola equally emphasized the bouquet that the servant holds, saying that Manet used it to include “bright, luminous patches” in the scene. 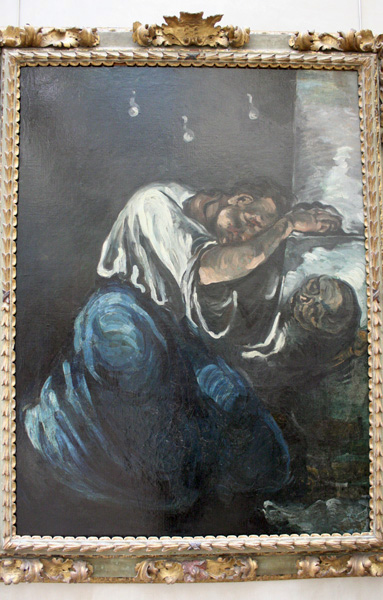 Manet’s Olympia created a scandal when it was first exhibited in the Paris Salon of 1865 because he addressed the taboo subject of prostitution with this work. Yet artist Paul Cézanne would create a more audacious version of Olympia several years later, in which the black servant uncovers the prostitute to expose her nudity to a man, clad in black, who sits in the foreground of the scene. Called Une Moderne Olympia (oil on canvas, 1873-74), this painting also hangs in the Orsay museum.

Another work by Cézanne, La Madeleine (oil on canvas, ca. 1869), may be an example of the influence of circumstances that prevailed at the time the artist created this work. The painting is a fragment of an œuvre that decorated the Cézanne family estate in Provence. While the composition of the painting is said to have been inspired by Dominico Fetti’s La Mélancolie (oil on canvas, 1623, Louvre), the subject’s pose, masculine features, and build are similar to those of the subject of Cézanne work entitled Le Nègre Scipion (oil on canvas, ca. 1867, Museu de Arte de São Paulo). The subject for the latter painting was a black male model named Scipion who worked in Paris during Cézanne’s time. In those days, artists were known to transform the sex and/or race of a model into the sex or race that the painting required if a model of the desired sex or race was not readily available.