You are here: Home1 / International2 / Paris3 / African-American Writers in Paris 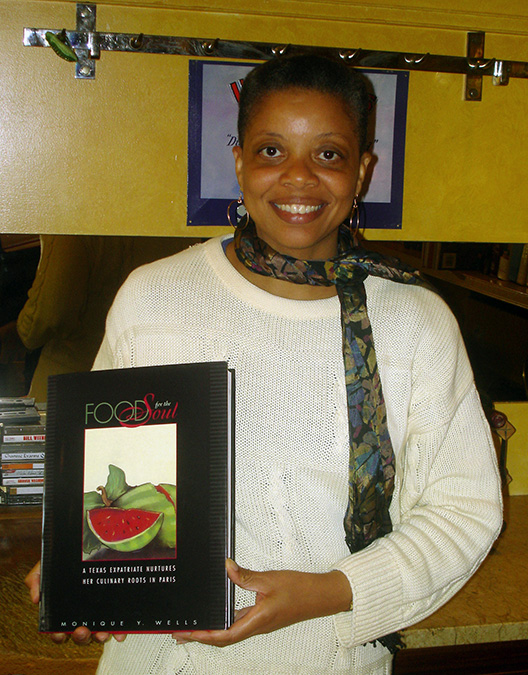 Monique Wells founder of Discover Paris! is passionate about African-American Writers in Paris. She has lived in Paris with her husband, Tom Reeves since 1992. She was named Black Culture and Heritage VIP in Paris. She has authored several wonderful books and itineraries, including Paris Reflections: Walks Through African American Paris and the Black Pearl Walk. Tom is the author of Paris Insights-An Anthology and the Paris Insights blog. He is co-owner of Discover Paris! Enjoy Monique’s insights on African-American writers in Paris.

A large part of the mystique that Paris holds for African Americans stems from the rich literary culture that is part of our 20th century heritage in the city. Several of our major writers, including James Baldwin, Chester Himes, Richard Wright and Langston Hughes, were deeply and irrevocably influenced by the time that they spent in Paris.

Hughes was the first of these writers to venture to France, arriving in Rotterdam, Holland in February 1924 and taking a train to Paris. His 6-month sojourn introduced him to the “Parisian world of color” in Montmartre, where he was inspired to write his first syncopated jazz poetry. Other writers who lived or visited Paris during the 1920s included Countee Cullen, Alain Locke, and Claude McKay.

Langston Hughes lived in Paris during the time of the Harlem Renaissance, when female writers such as Jessie Fauset and Gwendolyn Bennett also visited the city. But after World War II, the African-American literary scene was almost completely dominated by men.

Richard Wright arrived in the spring of 1946, thanks to the intervention of fellow American writer Gertrude Stein. He was undoubtedly the best known of the post-World War II African-American writers in Paris. Wright would settle in the 6th arrondissement and would never return to the U.S. He died unexpectedly in a Paris clinic in November 1960; his remains were interred at the Père Lachaise cemetery on the eastern edge of the city. Chester Himes, another writer of the epoch, co-existed rather uneasily with Wright during the 10+ years that he lived in Paris. He eventually left the city to establish residence in Spain, and died there. And James Baldwin, the youngest of these post-World War II writers, would discover himself racially and sexually in the City of Light. He would return to the U.S. many times during the tumultuous Civil Rights Era, but would never live permanently in the States again. As did Wright, he reached the end of his life on French soil. 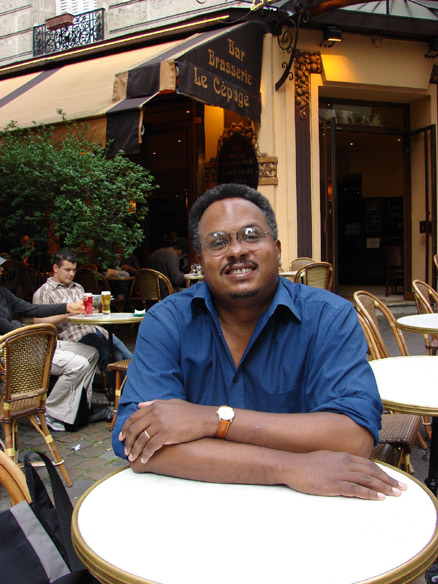 Jake Lemar at a Montmartre cafe

Following in the footsteps of these great men are contemporary African-American writers. The two who have enjoyed the greatest success and have lived in Paris for several years are Janet McDonald and Jake Lamar. McDonald, a writer of books for young adults, lost her battle with colon cancer in Paris in April 2007. Bronx-born Lamar is thriving as a novelist whose works are becoming increasingly popular in France.

Lamar is enjoying the good life as a writer in Paris with the release of the French translation of his fourth novel, Rendezvous Eighteenth (St. Martin’s Minotaur, 2003), on 5 September 2007, but is also involved in many additional projects. During the summer of 2007, he taught an intensive workshop on editing fiction and participated in a cultural project for young people of the Paris suburb of Sevran (including writing a one-act play for the teenagers and additional dialogue for other stage productions). He has recently written three short stories, all of which have been accepted for publication. In addition, a French television producer has picked up an option for one of his screenplays – a story about a ghostwriter (called nègre in France) for successful novelists who finds that her clients are being murdered one by one.

The only literary genre not yet attempted by Lamar is that of poetry, but a Greek chorus that he conceived (rhyming couplets in French) for one of the productions for the Sevran project came close!

When asked how he feels about the U.S. these days, Lamar replied that he looks upon it as “a family member that you love, but who drives you crazy.” He has no plans to move back – he considers Paris home. Yet New York is finding its way back into his life by way of writing projects. When the Department of Languages and Culture at the famed Ecole Polytechnique asked him to create and teach a course, he decided on the topic of the history and mythology of New York City. The class looks at the history of the city from 1901 through 2001 (Ellis Island through September 11) and explores the mythology of the city through literature, film and photography. One of his short stories (“Tolérence Zéro”, in French) is “an Edgar Allen Poe-like” account of a man who ends up living in the New York subway. It was written to accompany the publication of a collection of photographs of the city for a book called New York Transfer. And among the several ideas that he is contemplating for a new novel is a tale about NYC set in 1989, a particularly difficult year because the city was grappling with the Central Park jogger case and the Yusef Hawkins murder in Bensonhurst.

Lamar finds that while he has a loyal readership in the States, his work is more widely recognized in France. He partly attributes this to his accessibility to French journalists and the proximity of book fairs and other events at which his novels are promoted. But perhaps most of the credit belongs to his French publisher, François Guérif of the publishing house Rivages. Guérif only produces books about which he is passionate. Amazingly, all the books that he has published in his 20+ years in the business are still on the shelves – something that is unheard of in the U.S. He recently signed a contract to publish Lamar’s most novel, Ghosts of Saint Michel (St. Martin’s Minotaur), making it the fourth of Lamar’s five novels to be translated into French. Lamar says that Guérif is loyal to his writers and works hard to promote their works.

Among Lamar’s Paris pastimes, watching old movies in revival houses, attending jazz performances and viewing experimental theater pieces rank highest. His favorite places in the city are the Parc de la Villette (for open air cinema), place Saint-Michel and the Latin Quarter, the Parc Floral in the Bois de Vincennes (for summertime jazz concerts), and the whole of his beloved Montmartre. 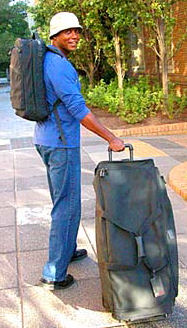 Elliott Hester on the go

Elliott Hester is the latest of a long line of male African-American writers to settle in Paris. A Chicago native, Hester worked as a media buyer, a fashion model, an airport baggage handler and a flight attendant before throwing caution to the winds and taking his first trip around the world in 1989. He attributes his wanderlust to the first airplane trip that he took at the age of 14, when he flew from Chicago to California. From that time on, he knew that he was destined to travel.

As a result of his experiences, he decided to become a writer. He moved to Sydney, Australia and began his professional writing career with an article about how Australian men treat women. He has parlayed his travels into two syndicated columns – Out of the Blue and Continental Drifter – and two books – Plane Insanity and Adventures of a Continental Drifter. Plane Insanity is a collection of stories that Hester wrote based on his experiences as a flight attendant. Adventures of a Continental Drifter is based on his second trip around the world.

Even after his second book hit the shelves, Hester continued to travel. A self-proclaimed vagabond, he began to wonder if he would ever have a home base again. But Paris, the irresistible City of Light, may change all that. While living in Sydney, Hester met a Frenchman named Gilles who invited him to stay in his vacant Paris flat last summer. Hester took him up on the offer and occupied the apartment from July through September 2006. He then found his own place in the Bastille area and has been kicking around Paris ever since.

Not that he has been idle – he is working on a new book that will discuss issues of race and travel. Ironically, the only negative, racially-based encounter that he has experienced was with a white American in Australia. He has also been working on his French, taking an immersion course at the Alliance Française, engaging in French-English language exchanges, and taking lessons from a private tutor.

Paris is Hester’s favorite city, which is a high compliment considering that he has visited so many places around the world. His favorite places in town include the Luxembourg Garden, the banks of the Seine, and just about any café in town. He still marvels that one can order a single cup of coffee at a sidewalk café and occupy the table for hours, undisturbed by the server. He uses these opportunities to observe the people passing by and to take notes for his writing projects in a relaxing atmosphere.

Though he had planned to make Paris his permanent home, the weak dollar has forced Hester to reconsider this decision. But he plans to be a frequent visitor once he has relocated to Argentina.