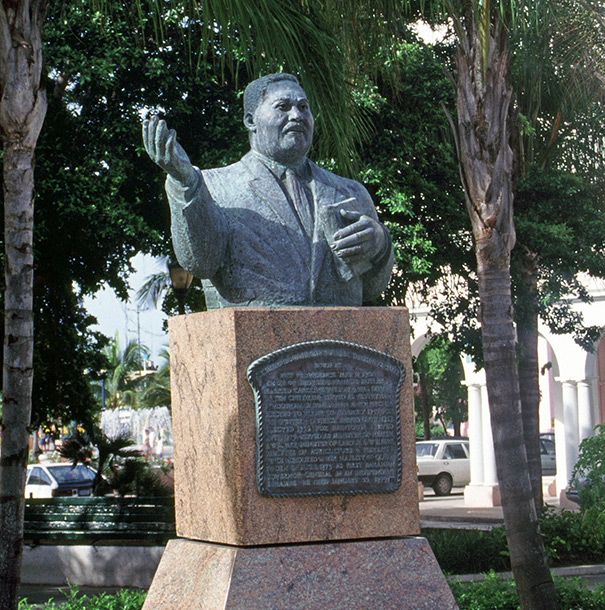 Monument to Milo Boughton Butler, the first Bahamian Governor of the Bahamas; (c) Soul Of America

People have lived in the islands of The Bahamas as early as 300 to 400 AD. In the 10th century, Lucian Indians, a subgroup of the Arawaks, settled throughout The Bahamas around 900-1500 AD. The Lucayans had left the Lower Caribbean to avoid their enemies, the Carib Indians, who were known to be fierce warriors and cannibals. A peaceful group, the Lucayans were farmers who lived in thatch huts, used stone tools, and made their own pottery. They were politically, socially, and religiously advanced.

When Christopher Columbus arrived in 1492 in San Salvador, there were about 40,000 Lucayans living in The Bahamas. Exploiting the people’s gentle nature, he enslaved them three years later and shipped them off to Hispaniola (present-day Dominican Republic) to work in Spanish-controlled mineral mines. Slavery, disease, and other hardships wiped out the entire tribe within 25 years of Christopher Columbus’ arrival.

In 1648, a group of dissident English Puritans arrived here in their quest for religious freedom. Although the adventurers gave Eleuthera its name, the island didn’t give much back, and the settlers experienced food shortages, a lack of proper supplies, and internal strife that split the group into separate communities along Governor’s Harbour and Preacher’s Cave.

To better guard against marauding Spanish troops in the area, another settlement was then established on the nearby and more easily defended, Harbour Island.

In the late 1600s to the early 1700s, The Bahamas made an ideal home base for pirates and privateers. The numerous islands and islets with their complex shoals and channels provided excellent hiding places for pirates. And since the Bahamas were close to well-traveled shipping lanes, it gave them plenty of opportunities to plunder merchant ships.

Slow-moving merchant ships, especially Spanish galleons weighed down with riches plundered from Central and South America, were easy prey for pirates. After removing the stolen cargo, pirates hid it in the numerous limestone caverns dotting The Islands Of The Bahamas. Sir Francis Drake and Blackbeard used The Bahamas as their ports of call at one time or another.

With its shallow waters and over 700 islands, The Islands Of The Bahamas also made a great place for Pirates to hide treasures. In addition, many ships laden with gold and silver sank off the coasts of the islands. Such tales of treasure add mystique to Nassau History and attract treasure hunters to this day.

In 1783, the former British Loyalists, assisted by the South Carolina militia, took up arms and forced the retreat of Spanish forces from the entire region without a shot being fired.

The Hotel and Steam Ship Service Act of 1898 provided government support for the construction of hotels and subsidized steamship service to the country. This gave birth to tourism in The Bahamas, with Nassau being officially promoted as a fashionable winter season resort.

In the 1920s, America’s Prohibition attracted wealthy American tourists to the nearby Bahamaian islands to indulge in food, spirits, lodging, and other items. Relaxed banking laws also triggered a banking boom in the economy for new hotels, warehouses, bars, distilleries, and wharves.

After Prohibition ended, the Bahamas went into an economic slump that lasted until World War II, when it served as an air & sea base in the Atlantic Ocean, bringing jobs to many.

In 1961, when Cuba casinos and resorts closed to American tourists, The Bahamas’ fortune took off as it leveraged its close proximity to Florida. The Bahamian government dredged Nassau’s harbor to accommodate more cruise ships, built a bridge connecting Nassau to Paradise Island, and the casinos boomed.

In 1964, Great Britain granted The Bahamas limited self-government and in 1969, the colony of The Bahamas became a Commonwealth.

Another milestone in Nassau History is when the nation finally became the free and sovereign Commonwealth of The Bahamas on 10 July 1973, ending 325 years of British rule. Though this nation remains part of the Commonwealth for economic and security reasons, July 10th is celebrated today as Bahamian Independence Day.