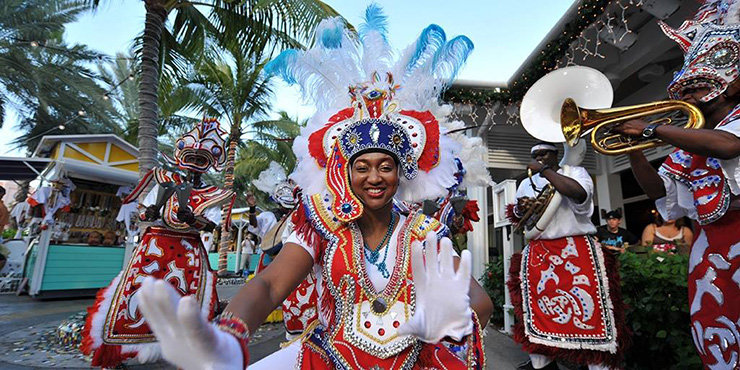 Junkanoo
Slaves were given a special holiday from plantations at Christmas time, to be with family and celebrate with African dance, music, costumes and call on the spirit of the ancestors while giving themselves over to joyful exuberance. Today, Junkanoo has evolved to a more organized parade with intricate costumes, themed music and prizes.

Traditional drums are still made of goatskins, lightweight and strapped to the front of the player. In Shango and Orisha pallet, drummers all sit in a circle, bow to the mother drum and say a silent prayer. The end drums begin to play, while the mother drum answers and picks up the rhythm. Beside the mother drums are the cutters. As the drummers, sit cross-legged with their drums held between their knees, cutters answer the mother drum in a hierarchy of drum sounds. Weddings are celebrated weeks before the official ceremony.

Quadrille
A dance by usually two or four couples, which became popular in France in the early nineteenth century, and later in England and Germany. This dance was taught to the slaves in The Bahamas and became a part of their culture. The music is taken from Bahamian Rake-n-Scrape.

A surprising fact for anyone not from New Orleans is that Bahamians are commemorated by parties long after loved ones are gone.

Bahamian Diet for What Ails You:

Paw Paw Milk – used to get rid of worms, usually given with a dash of sugar on a spoon
Cancer Bush – used by women because it heals the ‘insides’ especially after having a baby
Blue Flowers – used to bring up the cold of the chest
Pepper Leaf – very good for boils
Milk from Fig Trees – slows the heartbeat and calm the nerves
Sour Sop Leaf – calms the nerves
Crab Bush – used for stomach pains
Hibiscus – causes diarrhea and can be used to lose weight.
White Sage – used for itches on the skin
Sailors’ Flowers – used for high blood pressure
Castor Oil Leaf – used for menstrual trouble.
Pond Bush – used for arthritis.
Fever Grass – used for the flu
Bonavas – good for ringworms
Earth Remover – a mixture of bushes that causes women to become fertile; also brings down high blood pressure and cures ulcers.