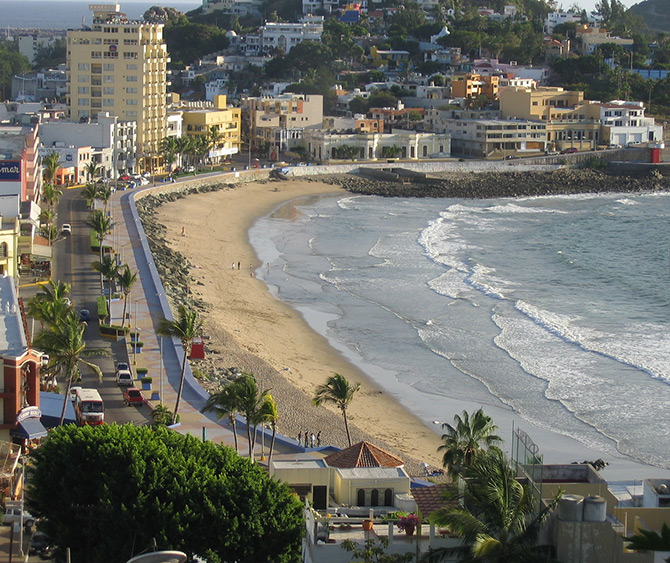 Part of the 13-mile long Malecon beachfront in Mazatlan; (c) Soul Of America

An 80-cent bus ride away is the Zona Dorado or Golden Zone, Mazatlan’s official tourist mecca. It sits along a beach lined with hotels that range from new and luxurious to quaint and mature. Restaurants serve Mexican, Greek, Italian and Japanese cuisine. Trendy shops offer jewelry, upscale clothing and the fine pottery crafts for which Mexico is known, and at night, neon lights illuminate huge disco clubs where revelers bailan (dance) to the wee hours. From a multi-plex movie theater to Starbucks outlets, Zona Dorado offers all of the trappings of a typical resort area.

Everyone is intrigued by the strange bronze statutes that stand at regular intervals along the Malecon, the curved esplanade that skirts Mazatlan’s beach. Any tropical locale can serve up crystalline waters and pristine sands, but where else can you see the sun setting behind a naked couple sporting wings and standing watch over a school of cavorting dolphins? These fanciful statues, of seemingly unrelated themes, tower over passers by. Equally stunning are the Mazatlan Cliffdivers in a narrow cove. The Danger and thrill of their is accentuated when you observe them from an overhead drone.

In addition to the nudists, there’s a military official on a motorcycle, a mermaid with her mer-child, an empty pulmonia (an open-air taxi that resembles a golf cart and is unique to Mazatlan) and a primly suited troubadour gripping the neck of his guitar with one hand and tipping his fedora with the other.

Another beach worth checking out is on Isla de las Piedras (Stone Island). Near dusk one day, I am the sole passenger in a motor-powered 10-foot boat that a friendly skipper guides towards the island. The trip takes five minutes. After scampering onto the pier, walk through a thicket of coconut-laden palm trees that look like perfect props in a surfer movie. Just past the palms lie a wide expanse of tan sands that stretches between thatch-roofed snack bars and surfboard rental businesses to the left and deep-blue waters lapping the beach to the right. The area is nearly deserted as a bright amber sun sinks into the horizon. 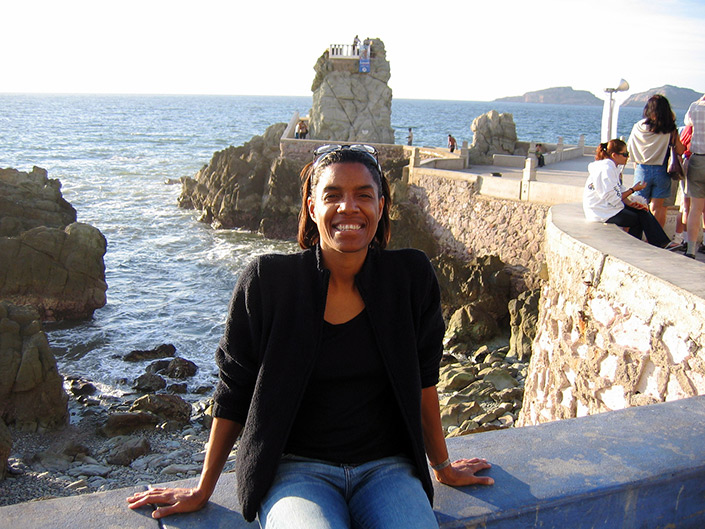 Jeanette Valentine at the Cliff Dive site on the Malecon; (c) Soul Of America