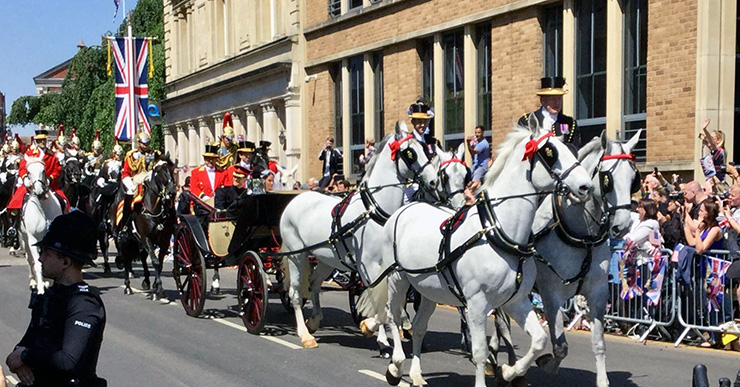 The clippity clop of horses drew nearer as we stood waiting against barricades along the procession route. Thousands of royal fans squeezed around us, flags waving, smartphones aloft, giggling and grinning. A rumble of cheers turned into yells, then screams, then shouts of “Meghan! Meghan!” — Jeanette Valentine, Soul Of America

My boyfriend, Patrick, and I had traveled halfway around the world, camped on a sidewalk for 30 hours and shivered through 46 degree night temperatures to experience the next 10 seconds.

Suddenly, there they were: Prince Harry and Meghan Markle, him beaming, then growing somber, her flashing a smile equal parts joy and astonishment at the love and adoration flowing from the cheering crowd. The newlyweds waved to well-wishers on one side, then the other as four white horses whisked their carriage by all too quickly. 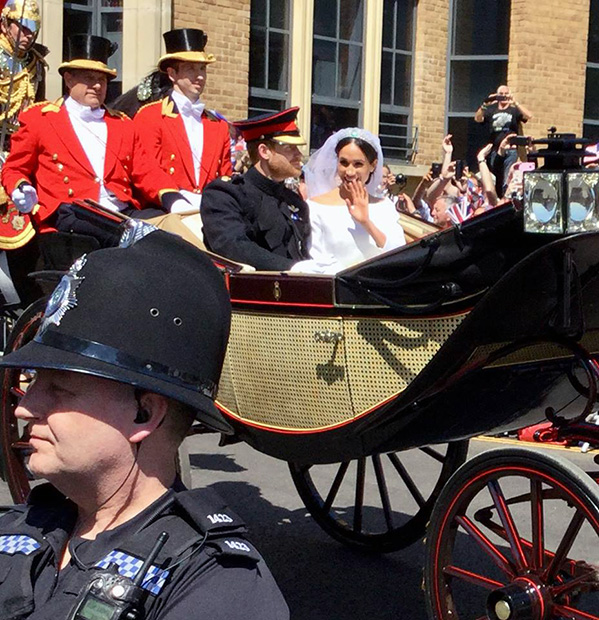 Throngs of near strangers hugged each other, folks pored over their smartphones, shouting about their “money” shots and a few excited souls kept jumping up and down. I won’t lie. That included me. The stunning actress from “Suits” and the reformed Royal bad boy had glided by, almost close enough to reach out and touch.

Patrick, my own Prince Harry, surprised me with this birthday gift of a lifetime after hearing me go on and on about my connection to the black princess – she’s half black; we’re both in interracial relationships; like me, she’s three years older than her beloved; we both graduated from Northwestern University, and she was getting married on my birthday, May 19th. I only learned later that Meghan’s grandmother’s name was Jeanette. Patrick knew we were destined to be there. 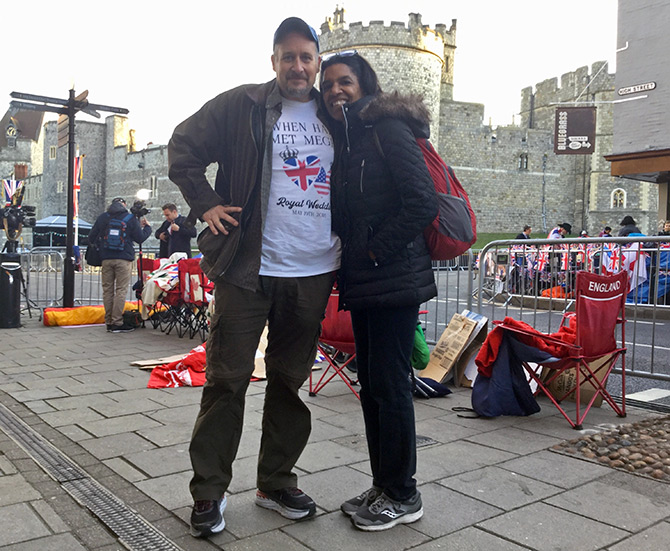 And those precious 10 seconds were only a small part of what made the trip so special. Because we set up camp the morning before on a deserted stretch of street, we were a natural draw for the media. In the course of six hours, Patrick and I conducted interviews with 20 journalists from all over the world, including the United States, Italy, Germany, Slovenia and Portugal. Here’s some of the coverage from ABC News and ITV News.

Best of all, we met and hung out with some extremely cool sisters from the States: Sheryl Jones from Ashburn, Virginia; Pamela Skinner from New York City, and three fabulous women from Texas, “The Traveling Divas,” also known as Meller Langford from Houston, Lynda Carter from San Antonio and Andrea Barr from Dallas. 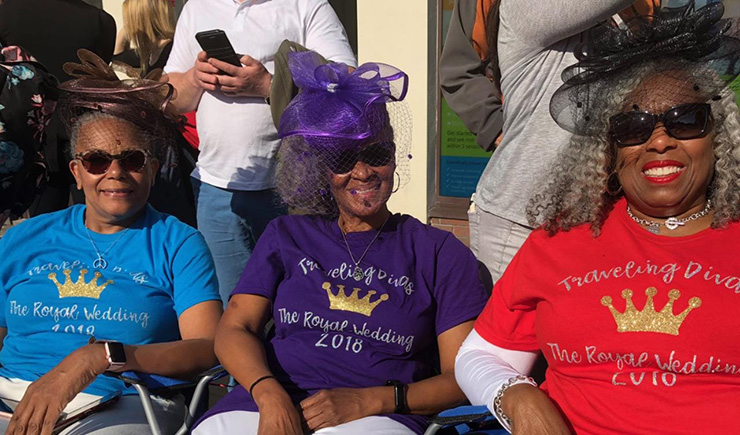 Instead of a grueling 30-hour endurance test on the streets, our group spent a day and night in fellowship, joking, laughing, singing, talking about our lives and our hopes for the Royal couple. At 2 am on May 19th, when the temperature had dipped into the 40s and we were hunkered down in folding chairs and smothered under blankets, this group and Patrick broke out with “Happy Birthday to You…,” the Stevie Wonder version, of course.

Like all of us, Meller understood the significance of Meghan Markle marrying into the Royal family. “When the engagement was announced, I said, ‘Wait a minute. Did they say her mother is African-American? Is this serious?’ My girlfriend still has the text, where I said, ‘We have to go to this.’ We got to go support our little cousin; that’s how I thought of it.” Sheryl, biracial like Meghan, decided she would attend the royal wedding even before the couple announced their engagement.

“As they grew closer and the possibility existed that she would one day join the royal family, I made the decision that if that came to fruition, I would make this my ‘bucket list wedding.’” She wanted to be a part of history. 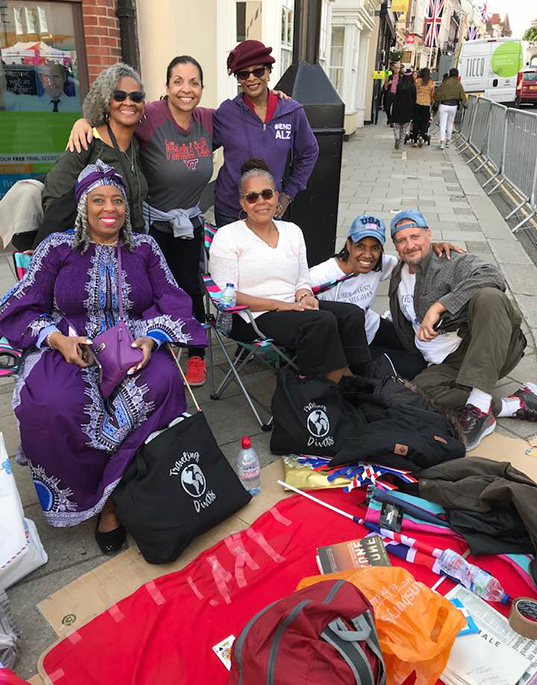 Another highlight for Sheryl was the camaraderie of like-minded Royal superfans. “I had travelled there alone, and by the time the wedding ended, I felt that strangers had become friends. We shared a bond based on an event that will never be forgotten,” she said.

“I also remember the wonderful feeling of being in an incredibly diverse population where the atmosphere was so positive. All I could think about was the simplicity of love and how powerful a tool it is.” 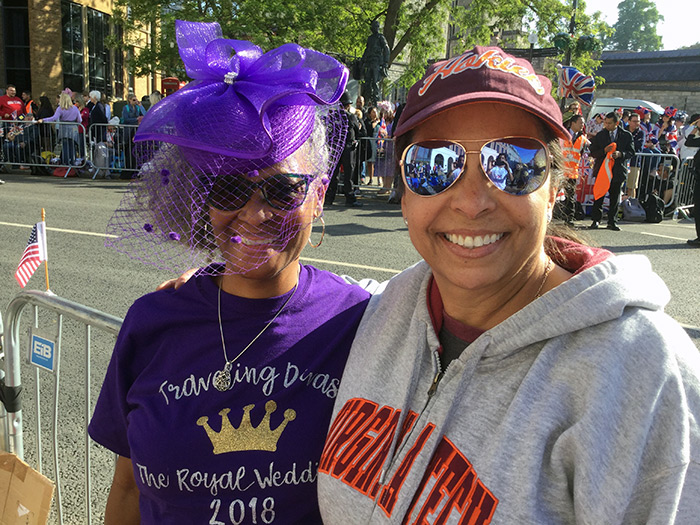