London uses military time or the 24 hour clock and dates are written day/month/year, so don’t get confused by the difference.

Currency is the British Pound Sterling with major credit cards accepted by most establishments. Remember to check the exchange rate before you leave so that you are not in shock when you get your credit card bill.Don’t bring very much cash — simply use one of the many ATMs when you arrive at the airport.

Time in London is five hours ahead of New York City.

English is the official language, but Americans may not understand every word.

Hotels have the most expensive rates on phone calls, so purchase a phone card for your international calls.

Post offices are located throughout the city with hours at 9am-5:30pm (Monday-Friday) and 9am-noon (Saturday).

Banks are open from 9am-5pm Monday-Friday. ATMs are plentiful and the most convenient way to get British Pounds. The ATMs only accept PIN numbers with 4 digits. Most large stores are open 9am-7pm (Monday-Friday) and 9am-5pm (Saturday and Sunday).

Electricity is different than the U.S., so bring an adapter in case your btteries run out or request one from the hotel.

Before leaving your hotel, check the weather report. London can have sunshine and rain on the same day.

Great Britain has universal healthcare, so any emergency room care is usually free of charge. The emergency telephone number is 999 or 112.

Confirm your flight at least 72 hours in advance.

Make a copy of your passport/flight itinerary/hotel reservations and leave it with someone at home. Also, carry an extra copy with you.

Pack headache and other medicines in your hand luggage.

If you have a cold or problems with inner changing air pressure, purchase the ear plugs for air pressure available at most airports or large pharmacies.

If you are sitting in coach, bring your own cold non-alcoholic drinks and sandwiches/salad for the long flight.

Bring plenty of magazines and books for entertainment.

Drink a lot of water to prevent dehydration. Alcohol alone, caffeine and cola drinks are the worst things to drink on a long flight.

Wear regular pantyhose that fit you properly on long flights. Control top pantyhose may cause swelling in legs and ankles during the flight.

Circulation is very important. Make sure you walk around a little and keep your legs stretched out in front of you. For the economy traveler this may mean putting everything in the storage compartment above, with the exception of your purse.

To get rest on flights, bring neck pillows and eye masks.

American English and British English are similar, but key words and the context of many phrases are different. For example, restrooms can be referred to as the WC which stands for water closet, or the loo. Other common differences — lift means elevator, the boot of the car is its trunk, nappy means diaper, fag means cigarette, and football (futbol) means soccer. A circus, as in Picadilly Circus, is a road traffic circle where busy streets intersect.

Some words are pronounced with accents on syllables other than Americans are used to, causing misunderstanding. For example, what we call aluminum in the United States is pronounced aw-loo-MIN-e-um by the British. The Thames River is pronounced Tims River. If you’re going somewhere that has a name with several syllables and you are unsure of the pronunciation, write the name down to show to cab drivers or transportation staff.

Be descriptive if people give you a blank look (or look offended) when you ask for something. Everyone in London will recognize your American accent. Given the changing U.S. foreign policy, its best to avoid political conversations.

One sister found out that a towel is a feminine napkin. She learned this after calling the front desk of her hotel and asking for a towel. She was wondering why the male front desk clerk sounded taken aback, since he kept saying “Excuse me.” She finally said, “I need a towel to wash my face.” He sounded so relieved when he said, “Oh a washcloth.” 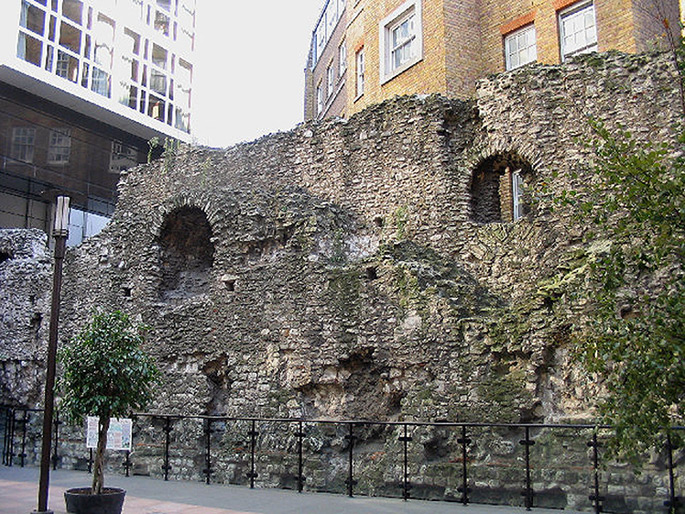 London Wall, a remnant from days under Roman rule

Use the Internet or phone cards for inexpensive communication with home. Some hotels offer high-speed Internet service in your room. Ask for pricing and directions at the front desk. Don’t call the U.S. using your hotel’s phone service unless it’s an emergency or saving money is not an issue. WhatsApp is a viable alternative.

If you are bringing a laptop or hair appliance from the United States, purchase an adapter so you can plug into the electrical outlets, which are different from those in the states. You can buy a package of adaptors for various European countries at most large electronics stores in the U.S.

If your European trip includes visits to other countries, remember the Euro is the official currency in most of Europe but not in Great Britain. You can convert your U.S. dollars into Euros to spend in France, Italy and Germany, but Great Britain only takes the British Pound. Remember that the conversion rates for the Pound and for the Euro are very different and tailor your buying habits accordingly.

Bring at least one ATM card and credit card from the U.S. Use the ATM card to get Pounds, since they usually have a better rate than many currency exchange offices. Your ATM card should have a code of 4 digits.

If you don’t use a money belt, place your money in hidden pockets or deep inside your bag, so that it’s hard for pickpockets. Pickpockets in London are some of the best in the world, so be careful. Put only things that you are willing to lose in your visible pockets. When walking around London, carry little cash, a credit card, a driver’s license and a copy of your passport for identification. It’s easier to replace a stolen driver’s license than an original U.S. passport.

Locals dress from casual (jeans and t-shirt) to ultra chic. Generally, most travel books recommend that you should dress well. This is good advice if you are not planning to ride the Underground (Tube) many times during the day, walking long distances or going to tourist attractions. During the hot summer months, wearing jeans and t-shirt is acceptable. In the wintertime, bring lots of layered clothing, i.e. sweaters and scarves because temperatures can dip into the 20s and teens overnight.

Pack several pairs of good walking shoes, which will help while exploring a city that covers more than 600 square miles.

After you arrive in London, pay attention to how the locals are dressed on the Underground (Metro system). You may want to dress in a similar fashion.

Many restaurants in London have smoking and non-smoking sections. Because the sections often are right next to one another, non-smokers may have to endure wafts of cigarette smoke unless they request to be moved. However, all Starbucks locations — seemingly one on every block of the main touristy areas — are completely smoke-free.

Steve Martin, a historian of the Black experience in London, highly recommends Bamboula, Brixton, 020-7737-6633 for reasonably priced down-home Caribbean fare. He also suggests the Brixtonian Havana Club, 020-7924-9262 which is more upscale with a huge array of rums and cuisine from a different island every month.

A local Brixton website provides a comprehensive guide to great food in Brixton, where there’s a large concentration of West Indian eateries. If you are missing cuisine from home, go to Planet Hollywood, Hard Rock Cafe, Trader Vic’s or Cheers, a replica of the bar in the long-running NBC television series of the same name.

Find the nearest grocery store. Take advantage of supermarket chains like Mark and Spencer’s and Safeway to purchase fruits, snacks and water at reasonable prices. Stock up on your favorite drinks, so that you don’t need to buy the expensive drinks in your hotel’s mini-bar. London has a large East Indian population, and Indian restaurants are plentiful and relatively inexpensive. The spicy curries and gravies of Indian cuisine nicely complement the chill of London during the winter months. Two highly recommended restaurants are Gaylord and Mela.

Fish and Chips are very good in London and are normally cheap. You can choose from Rock, Cod, etc. Don’t be surprised if they wrap it in newspaper because that is their tradition. Also, they may put vinegar and salt on your Chips (French Fries).

An English breakfast consists of Pork and Beans, Meat, Toast and perhaps eggs. Brits love Pork and Beans for breakfast so you may want to customize your breakfast when you order if you don’t want beans. One very cheap place to eat a sandwich that you can find all over the place is Benjys. The food is fresh and tastes good, so it is a nice quick meal during your tour of London.

The Big Bus Company offers 24-hour passes that allow you to hop on and off buses that hit all the major tourist attractions in London.The fee, about $40, also includes free tickets to some tourist attractions, including a cruise on the River Thames.The “open air” seats on the top of the bus provide the best views.