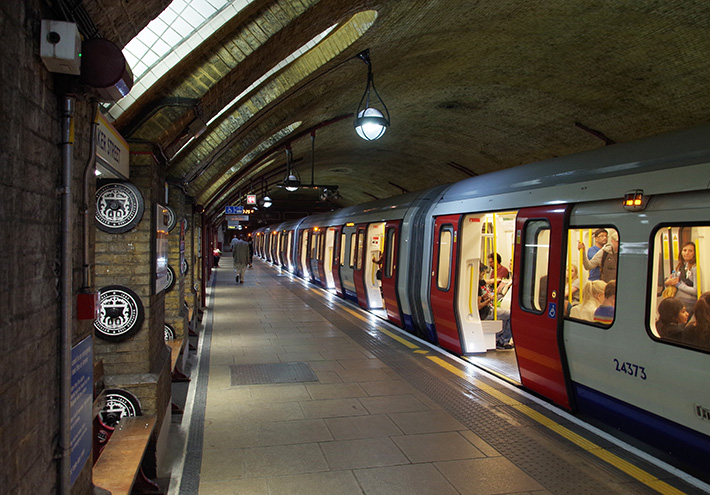 Heathrow International Airport (LHR) is the busiest airport in Europe, greeting 75 million passengers per year. It won’t win architectural awards, but is well used by over 90 airlines flying to 170 destinations worldwide. The airport is the primary hub of British Airways, and a base for Virgin Atlantic. Given its international hub status, the world’s largest commercial plane, Airbus A380, is often seen on runways. Heathrow has four passenger terminals (numbered 2 to 5). ATMs are available before and after security control in every terminal. For relaxation, book into one of the airport lounges to enjoy complimentary drinks, snacks, newspapers and magazines. Of course, the airport has any number of bars and grills to relax before your flight. Connecting the terminals is an APM traveling the 1.3-mile distance. Central London is 12 miles and 15 minutes away by Heathrow Express trains to Paddington Station. You can also catch National Express Coach to Victoria Station. HEATHROW INTERNATIONAL AIRPORT MAP

Check the luggage policy for your airline and confirm your flight 24 hours in advance. Make a copy of your passport/flight itinerary/hotel reservations and leave it with someone at home. Pack headache and other medicines in your hand luggage. There is free WiFi through the airport. Taxis and shuttle buses await you at the Arrivals roadway.

Gatwick International Airport is primarily used for regional flights. Its particularly useful on flights to Ireland. London has the Underground (Metro system) or commuter rail service to each of its 5 airports.

The Heathrow Express, a non-stop train from Heathrow to Paddington Station, is the fastest and most convenient route into the city. For about $20, the stylish, new-looking trains will deliver you to the heart of London in about 15 minutes. Since it is a train, don’t expect help with your luggage. Paddington is a major transfer station with easy bus, subway and train connections to other parts of the city.

The Gatwick Express, a non-stop train from Gatwick to Victoria Station is the fastest way to central London. The train ride is 30 minutes with departures every 15 minutes and costs about $20.

The National Express Airport Bus. The ride to central London takes about an hour, but you don’t have to worry about transferring and walking through huge train stations. Your luggage will be stored underneath the bus. It is a nice way to travel to Central London if you have time and costs about $20.

The most economical way to get to Central London is to ride the London Underground Train but it is the slowest and most difficult. If you don’t have much luggage it is okay. The trick to navigating the Tube with a lot of luggage is to get the Handicap Tube guide that will show you all the stations that have elevators. It will also show elevator access as well as which line has the access (some stations have multiple lines and different ways of access dependent on which line you come in on). A taxi from the airport to central London costs about $100.

One sister experienced several ways to get between Central London and Heathrow. During off-peak hours, she took the Tube, which proved cheap (2.25 pounds or a little under $5) and easy. Without the crowds of commute hours, the trip was relaxing, though the journey made dozens of stops and took about an hour. The Heathrow Express was fast and moderately priced at about $25, with sleek, clean trains that were a step above their subway counterparts. Another time, after getting lost on the bus system en route to Heathrow, she reluctantly decided to take a cab from Victoria Station to Heathrow and paid 57 pounds or about $100. Paying by credit card meant a hefty surcharge.

Since the 1830s, London has remained a mass-transit culture that preserved its train stations and expanded its rapid transit system, while adding a select numbers of freeways like, Chicago. Consequently, London has many great train stations, with several being particularly interesting to travelers.

St. Pancras Station is one of the greatest Victorian buildings in London and a popular destination. Fully restored, it is the place to connect, with 3 high-speed train lines and 6 London Underground lines, including two that go to Heathrow and Gatwick Airports. Plenty of car rental options, shuttles and taxis dwell at the station as well. St. Pancras is best valued for hosting Eurostar trains that reach up to 199 mph traveling to Lille, Paris, Lyon, Avignon and Marseilles on one route and Lille, Brussels on the other route. Southeastern and East Midlands trains running 140-186 mph within the United Kingdom hub at St. Pancras Station too. Showcasing performing artists and art shows on a weekly basis, St. Pancras also contains a luxury hotel, shops, restaurants, cafes, coffeehouses and the longest champagne bar in Europe, St. Pancras handles an average of 250,000 daily patrons. Trains arrive on the Grand Terrace with escalator service to the passenger amenities. If you have questions, just ask a friendly Customer Service Assistant in the station.

Opened in 1874, Liverpool Street Station is a restored railway terminus and Underground station in northeast London. It is the railway terminus of West Anglia Main Line to Cambridge, Great Eastern Main Line to Norwich, local and regional commuter trains serving east London, East of England, and Stansted Express to London Stansted Airport. With nearly 60 million annual passenger entries and exits, it is one of the busiest in London.

Opened in 1848, Waterloo Station remains the busiest station in London. It was the terminus of Eurostar before it switched to St. Pancras Station in 2007. Located near the South Bank of the River Thames, Waterloo Station serves 100 million passenger entries and exits as the 15th busiest passenger terminal in Europe. Waterloo is the Central London terminus for the majority of commuter & regional trains to South West London, Surrey, Hampshire, Dorset and Berkshire. Major destinations served include Wimbledon, Epsom, Dorking, Guildford, Woking, Basingstoke, Winchester, Southampton, Salisbury, Portsmouth, Bournemouth, Weymouth and Exeter.

Victoria Station, with over 80 million passenger entries and exit, is the second-busiest train terminus in London. Victoria is a London terminus for the majority of commuter/regional services to South London, Sussex, East Surrey, South East London and Kent. Its the terminal for Gatwick Express train to Gatwick Airport.

London Underground system has the 11th highest Metro system ridership in the world. Locals often call it the “Tube”, but only 45% of it is underground. Though some of its 270 stations opened in 1890, its 250 miles, 12 lines and Docklands Light Railway. Underground trains run between 5am-Midnight, Monday to Saturday, with reduced operating hours on Sunday night. 24-hour service is available on Friday and Saturday nights on the Jubilee, Victoria and most of the Piccadilly, Central and Northern Tube lines. Mind the gap between train floor and platform at some stations. You can easily trip, if not watching.

The Victoria line crosses the River Thames, south to Brixton.

View this LONDON UNDERGROUND SYSTEM MAP. As you see from the map, lines are color-coded. Atypical of Metro systems worldwide, some lines are named for midpoint stations, rather than the last station on their line.

Use public transport in London via Oyster or Travelcard. Oyster card, a credit-card-sized electronic ticket, offers almost unlimited use on the London Underground, London Overground, Docklands Light Railway, Tramlink, London Buses and National Rail, but is not valid outside the London fare zones or on certain airport express services. Paper-based Travelcard offers the same intermodal access everywhere in greater London, but is used everywhere in Greater London, until all stations switch to Oyster Card’s electronic ticketing system. Travelcard and Oyster card fares are calculated by using a system of fare zones dividing transport network into 6 concentric circles. When your ride is within 1 or 2 zones, fair is lower.

Tourists in the know, purchase a Oyster card with their Travelcard or Oyster Card for the least expensive, convenient transport and access to more than 60 attractions in London.

You must try the Underground for one day to experience this slice of London life. Using the Unground, plan on spending $5 to $30 fare per person. If you can, avoid riding during commute hours, since a congestion up-charge will apply. Youth Pass pricing is available until age 18. Like most Metro systems worldwide, put the ticket into the slot on the side of the turnstile. It pops out of the top of the turnstile. When the lights turn green, remove it for the turnstile to let you through.

London’s metro stations are a tad safer than New York City or Chicago or Philly. A single person can go anywhere on the system. But at night, there are a several dicey stations for women. So ask your hotel concierge and plan ahead. Like Metro systems worldwide, prevent being targeted by pickpockets as a vulnerable tourist. If traveling alone, avoid reading paper maps or tourist books on the Underground. Instead, study the Underground map on your computer/tablet in your hotel room or at a cafe. If you have questions about the Metro, ask the concierge or English-speaking waiting and tip them. Then fold and stash away paper maps. Then after catching the Metro, a brief glance at maps in stations and on trains will not draw undue attention.