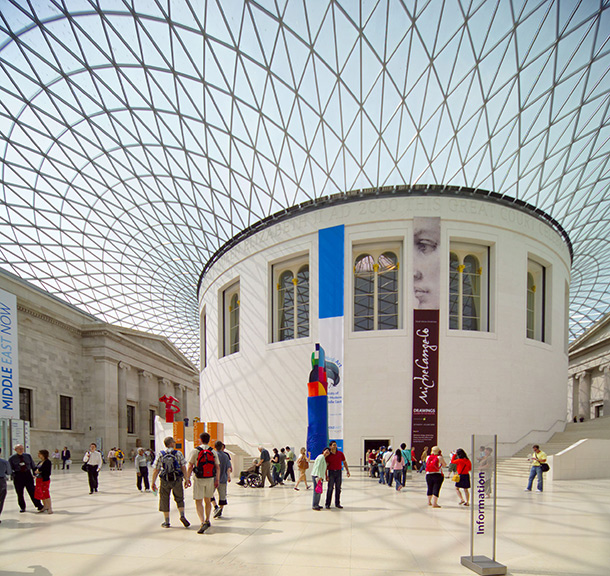 With four of the world’s most popular museums (British Museum, Tate Modern, Victoria & Albert Museum and the National Gallery) and dozens of smaller museums, London is a premiere destination in the art world. In the last 20 years, the city has spread the wealth to several museums across the South Bank of the Thames River. For savings and stess-free entry to many museums, consider purchasing a London Pass.

British Museum
Founded in 1753, the British Museum’s remarkable collection spans over two million years of human history. Enjoy a unique comparison of the treasures of world cultures under one roof, centered around the magnificent Great Court. World-famous objects such as the Rosetta Stone, Parthenon sculptures, and Egyptian mummies are visited by up to 6 million visitors per year. In addition to the vast permanent collection, the museum’s special exhibitions and events advance understanding of the collection and cultures they represent.
DAYS & HOURS: daily 10.00-17.30 and Friday until 20.30.
ADDRESS: Great Russell Street
TRANSIT: Tottenham Court Road Station, Russell Square Station or Holbourn Station
PHONE: +44 (0)20 7323 8000
WEBSITE: http://www.britishmuseum.org

London Transport Museum
The Museum explores the link between transport and the growth of modern London, its culture and society since 1800. Highlights include the iconic red London bus, the world’s first Underground steam train and the ‘padded cell’ -– a train carriage dating back to the 1890s. The Design for Travel gallery showcases advertising posters and artworks that include Harry Beck’s original ground breaking artwork for the London Underground map, which simplified the system for mere mortals, and the story of the development of the ‘roundel’ transport logo. The galleries are full of interactive exhibits, including real buses and trains.
DAYS & HOURS: Mon-Thu, Sat-Sun 10:00-18:00 (last admission 17:15), Fri 11:00-18:00 (last admission 17:15)
ADDRESS: Covent Garden Piazza
TRANSIT: Covent Garden Station and Leicester Square Station
PHONE: +44 (0)20 7379 6344
WEBSITE: http://www.ltmuseum.co.uk

Museum of London
Step inside for an unforgettable journey through the capital’s turbulent past. Discover prehistoric London, see how the city changed under Romans and Saxons, wonder at medieval London and examine the tumultuous years when London was ravaged by civil wars, plague and fire. Venture into the Galleries of Modern London where you can walk the streets of Victorian London, take a stroll in recreated pleasure gardens and marvel at the magnificent Lord Mayor’s Coach. Entrance is FREE.
DAYS & HOURS: Mon-Sun 10:00-18:00.
ADDRESS: 150 London Wall
TRANSIT: Barbican Station and St. Paul’s Station
PHONE: +44 (0)20 7001 9844
WEBSITE http://www.museumoflondon.org.uk

Tower of London
Despite it’s grim reputation as a place of torture and death, within these walls you will discover the history of a royal palace, an armory and a powerful fortress. Don’t miss Royal Beasts and learn about wild animals that have inhabited the Tower, making it the first London Zoo. Discover the priceless Crown Jewels, join an iconic Beefeater on a tour and hear their bloody tales, stand where heads have rolled, learn the legend of the Tower’s ravens, storm the battlements and more!
DAYS & HOURS: Summer: 1 March-31 October: Tuesday-Saturday 09:00-18:00 / Sunday-Monday 10:00-18:00, Last admission 17:00, Winter: 1 November-28 February: Tuesday-Saturday 09:00-17:00 / Sunday-Monday 10:00-17:00, Last admission 16:00
ADDRESS: Tower Hill
TRANSIT: Tower Hill Station
PHONE: +44 844 482 7777
WEBSITE http://www.hrp.org.uk/TowerOfLondon/

Tate Modern
Located in a reimagined Bankside Power Station on the south side of the Thames, it exhibits the British national collection of modern art from 1900 to the present. The Tate consists of 4 wings, each consuming half a floor and named theme or subject of significant artworks of outstanding quality. For example, you can often find exhibitions by artists the caliber of Jackson Pollack, Alexander Caulder and Terry Frost. While it has traditionally focused on art from Western Europe and North America, the Tate Modern has recently expanded its holdings of modern and contemporary artworks from Africa, Asia Pacific, Eastern Europe, Latin America, the Middle East and South Asia. With such high quality and a more diverse collection, no wonder the Tate Modern is one of the most popular modern art museums in the world. Entrance is FREE, except for special exhibitions.
DAYS & HOURS: Sun–Thu 10.00–18.00, Fri-Sat 10.00–22.00; closed 24-26 December
ADDRESS: Bankside
TRANSIT: No Underground Stations nearby
FERRY: Bankside Pier
PHONE: +44 (0)20 7887 8888
WEBSITE http://www.tate.org.uk/modern

Tate Britain
Located in a reimagined Bankside Power Station in 2000 on the south side of the Thames, it exhibits the national collection of modern art from 1900 to the present. The Tate consists of 4 wings, each consuming half a floor and named theme or subject of significant artworks of outstanding quality. For example, you can often find exhibitions by artists the caliber of Jackson Pollack, Alexander Caulder and Terry Frost. While it has traditionally focused on art from Western Europe and North America, the Tate Modern has recently expanded its holdings of modern and contemporary artworks from Africa, Asia Pacific, Eastern Europe, Latin America, the Middle East and South Asia. With such high quality and a more diverse collection, the Tate Modern is one of the most popular modern art museums in the world. Entrance is FREE, except for special exhibitions.
DAYS & HOURS: Mon-Sun 10:00-18:00.
ADDRESS: Millbank
TRANSIT: Pimlico Station
FERRY: Millbank Pier
PHONE: +44 (0)20 7001 9844
WEBSITE http://www.tate.org.uk/britain

Natural History Museum
Hundreds of exciting, interactive exhibits in one of London’s most beautiful landmark buildings. Highlights include the popular Dinosaurs gallery, Mammals display with the unforgettable model blue whale and the spectacular Central Hall, home to the Museum’s iconic Diplodocus skeleton. Don’t miss the state-of-the-art Darwin Centre Cocoon where, on a self-guided tour, you can see hundreds of fascinating specimens and look into laboratories where scientists are at work. The Museum offers a wide-ranging program of temporary exhibitions and events, including chances to join experts in the Darwin Centre’s high-tech Attenborough Studio in topical discussions about science and nature.
DAYS & HOURS: daily 10.00 – 17.50 (Last admission 17.30); Closed 24 – 26 December.
ADDRESS: Cromwell Road
TRANSIT: South Kensington Station
PHONE: +44 (0)20 7942 5000
WEBSITE http://www.nhm.ac.uk

Science Museum London
The Science Museum is the most visited science and technology museum in Europe. There are over 15,000 objects on display, including world-famous objects such as the Apollo 10 command capsule and Stephenson’s Rocket. Our interactive galleries bring to life first scientific principles and contemporary science debates. Plus, you can experience what it’s like to fly with the Red Arrows or blast off into space on an Apollo space mission in our stunning 3D and 4D simulators or watch a film on a screen taller than four double-decker buses in the IMAX 3D Cinema. Entrance is FREE, except IMAX and special exhibitions.
DAYS & HOURS: daily 10.00-18.00
ADDRESS: Science Museum, Exhibition Road
TRANSIT: South Kensington Station
PHONE: +44 870 870 4868
WEBSITE http://www.sciencemuseum.org.uk

Victoria & Albert Museum
One the world’s greatest museums of art and design, representing more than 3,000 years of human creativity, with collections unrivaled in their scope. In recent years, the V&A has undergone restoration of its Medieval Renaissance galleries containing some of the greatest surviving treasures from the period, the breathtaking Jewelry gallery and the stunning galleries illustrating the history of Britain through the nation’s art and design. In addition to its outstanding free permanent collection, the V&A offers extensive temporary exhibitions and events. Entrance is FREE, except special exhibitions.
DAYS & HOURS: Sat-Thu 0.00-17.45, Friday 10.00-22.00
ADDRESS: Science Museum, Exhibition Road
TRANSIT: Cromwell Road Station and South Kensington Station
PHONE: +44 (0)20 7942 2000
WEBSITE http://www.vam.ac.uk

National Gallery London
Located in Trafalgar Square, the museum houses over 2300 paintings in the Western European tradition from the 13th to the 19th centuries. It came into being when the British government bought 38 paintings from the heirs of John Julius Angerstein, an insurance broker and patron of the arts, in 1824. Building its collection over time in a such a popular location, the museum has encyclopaedic in scope and one of the most popular in Britain. Entrance is FREE.
DAYS & HOURS: daily 10.00-18.00, Friday until 21:00
ADDRESS: Trafalgar Square
TRANSIT: Charing Cross Station
PHONE: +44 20 7747 2885
WEBSITE http://www.nationalgallery.org.uk