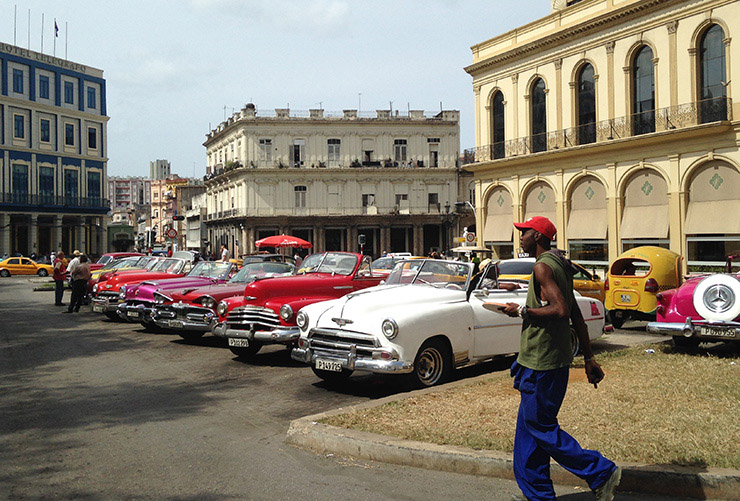 When friends ask, “What was Cuba like?” what they really want to know is “Did you mambo to Afro-Cuban beats?” “Did you cruise in a neon pink ’57 Chevy?” “Did you down Mojitos laced with smooth rum?” For my boyfriend Patrick and me, the answers are “Yes,” “Yes” and “Yes” for him/”No for me” (I don’t drink alcohol).

Before you go to Havana, consider looking beyond the clichés of Fodor’s or Lonely Planet. Discover how the local people live, eat what they eat, and go where they go. See what tourists miss as they glide by in the plush seats of luxury buses.

If you’re committed to a traditional vacation, read the advice at the end of this article. But if you want a truer, grittier, and less expensive view of Havana, here are five ways to keep it real:

1. Stroll Through a Neighborhood
Our Airbnb is located in working-class, “gentrified” Vedado. The houses near where we stay are like brownstones, two-story verticals edged in architectural flourishes worthy of Rome. They stand side-by-side, like mismatched siblings. Some, ours included, are newly painted in bright hues with shiny wrought-iron finishes. The elegance of others has faded into weathered wood, peeling paint, and rusty gates. 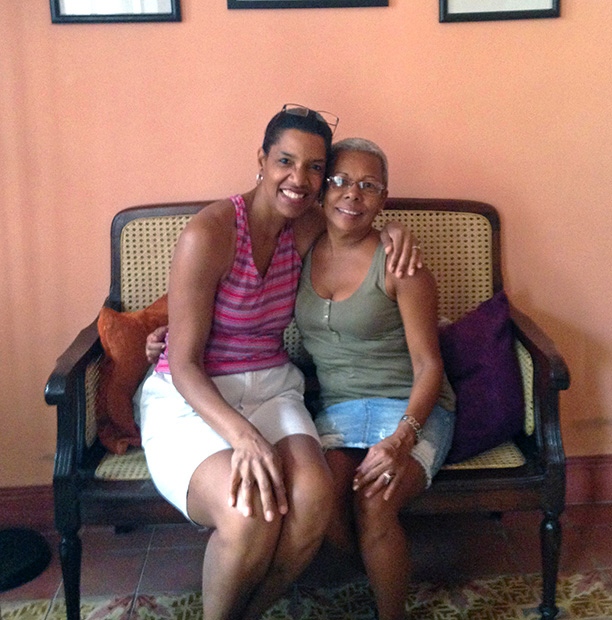 Like much of Cuba, there’s still majesty in these buildings. They speak to the past and present of an island inching toward change.

And there is an element of serendipity to our wanderings. We stumble upon John Lennon Park and take selfies next to a bronze statue of the Beatles’ front man sitting on a park bench. We discover a Holocaust Museum, exhibiting stark photographs showing the history of Nazi Germany and its horrific acts of barbarism. The executive director, Simon Goldstein, gives us an impromptu lesson on the history of Jewish people in Cuba.

The building that houses the museum happens to be the rehearsal hall for a world-renown Cuban dance troupe – Malpaso Dance Company. Just as we’re leaving the museum, we hear slow, haunting music coming from a back room. We peek through the door and see that the group is giving a command performance exclusively for a tour group. We slip in and grab seats in the back. These elegant, lithe artists perform a modern dance composition of such grace and artistry that it brings tears to my eyes.

2. Eat Where the Locals Eat
At noon, folks line up at eateries that are simply open windows on the sides of warehouse-like buildings. No room for tables. No room for standing. Just order and go. The most popular items are pizza, spaghetti, and tortillas.

Unlike the round thin circles we know, tortillas are sandwiches. I remember that “torta” actually means “sandwich” in Spanish. We grub on egg, ham and cheese “tortillas” for breakfast three days in a row (35 cents each). 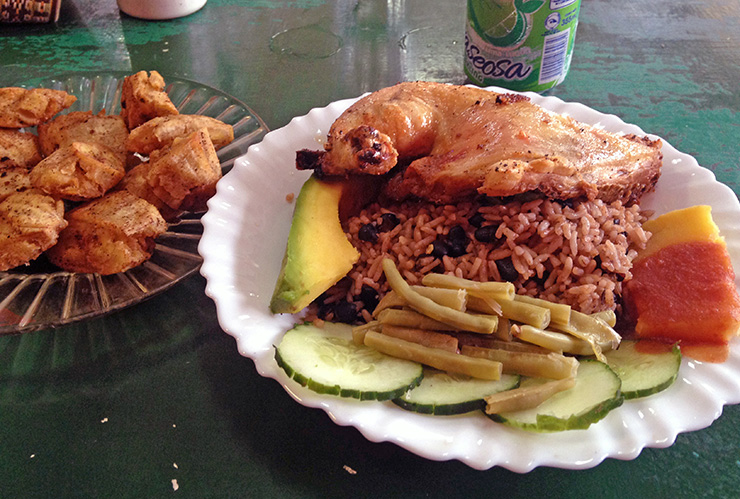 At a small café, we dine on “Pollo Futo Asado,” a grilled chicken plate with rice, black beans, salad and fried balls of cornmeal that remind me of hot water cornbread ($6 for two meals with cokes).

Vieja Ropa (despite its translation of “old clothes” in English) is a delicious and much-beloved meat dish in Cuba. At a downtown Havana restaurant, Vieja Ropa is on the menu for $14. In the neighborhood, it costs $2. Later in the trip, we live off individual 50-cent pizzas from the open-windowed cafes of Cienfuegos, four hours south of Havana.

3. Go for ice cream and don’t mind the lines
One of the largest ice cream parlors in the world takes up a tree-lined block in Vedado. Coppelia sits in the midst of a lush urban park of the same name. The entrance to the path that leads to the ice creamery is watched over by a uniformed guard and lines snake down the street and around the corner in both directions. People are queued up as if at Disney World. I estimate an hour wait.

In 1966, Fidel Castro commissioned the ice creamery, (“heledaria” in Spanish), which was built as a marvel of modern architecture. Constructed like a spaceship with five stacked concrete discs for floors, Coppelia’s circular interior is bathed in the light of vertical stained glass windows. The concave white ceiling resembles a puzzle of triangles that look down upon a grand spiral staircase. 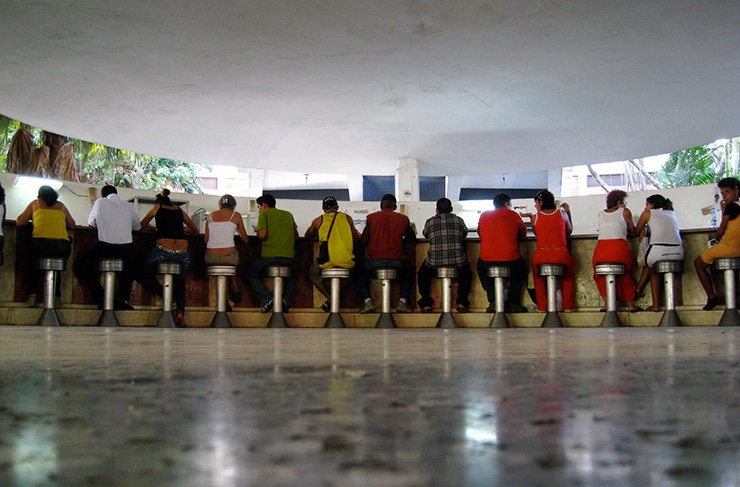 As we hesitate, trying to decide if ice cream is worth standing beneath a blistering sun for so long, the guard approaches us. “Are you paying with CUCs?” he asks. CUCs (pronounced “kooks”) are Convertible Cuban Pesos, created by the government for tourists. One CUC = 1 U.S. dollar.

In contrast, Cuban residents use Cuban Pesos (CUP). One CUP = .25 U.S. dollar, roughly a quarter. Later in the trip, we learn that the least expensive restaurants are the ones whose menus list prices in CUPs.

We nod to the guard that we are paying with tourist CUCs, and he escorts us into the park – cutting the lines – and points to an ice cream truck and a canopy shielding tables from the sun. We order and eat our soft serve, but I really wished we’d waited in line with everyone else. Or we could’ve bought our CUCs ice cream and then eaten in the ice creamery itself with true Havanans. Taking the shortcut route, though, seems unfair to those who braved the hot sun.

Still, it just didn’t seem as authentic spooning our dessert in a faux oasis alongside sun-burned Canadians and Australians.

4. Ride The Bus
“No, no, no. Too crowded.” Our Airbnb host, Amelia, scoffs at the idea of us taking the bus. “I’ll call a cab.” A cab to downtown costs eight bucks. The bus is five cents. It’s a no-brainer for us.

We walk a few blocks and catch one of the orange city buses to Old Havana. Hanging on to straps, we lurch forward. The scenery from a bus is the same as from a cab. But swaying next to other riders, hearing rapid-fire Spanish, watching noisy high-schoolers bound onboard, seeing a mother bounce a little boy on her lap – all of it made us feel a little less like outsiders.
Plus, it’s easy to miss your stop – a good thing for us. We love getting lost, stumbling upon sites we might’ve missed. When we notice that the bus has sailed past our stop, we get off and explore. 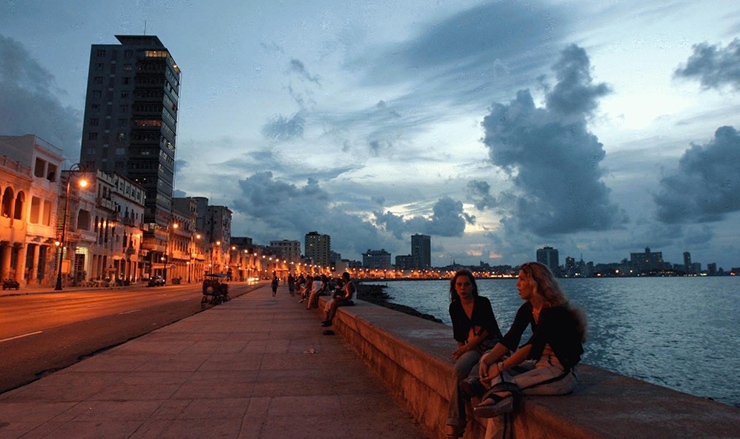 But when darkness falls, the Malecon belongs to the locals. Underneath street lamps, teenagers laugh, whisper and kiss the night away. Twenty-somethings holding plastic cups and pass around a bottle of Havana Club rum.

Fishermen lean against the wall, their taut lines disappearing into the shadows. Some sit on their haunches, flipping their skinned, cleaned catch on makeshift grills.

As waves pound the rocks, boys chase one another, and vendors sell cobs of roasted corn. The air smells of ocean spray and sizzling street food.

A trumpeter, guitarist and drummer are jamming Latin rhythms and syncopated beats at a bar close to the Malecon’s end. We sit on a nearby bench, enjoying another side of the real Havana.

1. Book a tour. You won’t have to worry about “hablando Español,” understanding the currency, getting lost on public transportation or being hassled (as much) by those less fortunate.

We met fellow travelers who swore by the tour company Havana Journeys (https://havanajourneys.com/en). The company takes care of all paperwork, including visas, and the tours run like clockwork. Our friends rode in a bright pink 1950’s Chevy convertible for their full-day excursions around Havana and on day trips outside the city.

To visit Cuba legally, your trip must fall under one of 12 designated categories – such as education, health, and professional research activities. Make it easy on yourself and use a tour group, which will handle the details, including registering you under one of the approved categories.

2. Check out the Tropicana Cabaret in Havana. It’s pricey, but the floor show is phenomenal (at least based on YouTube videos). Lithe, athletic dancers; brilliant, elaborate costumes, and the best in Cuban music make this a must-do.

3. Take trips outside of Havana. The tobacco countryside of Viñales is west of the city. Since we’re not into cigars, we took a pass. But photos of this greenest of green regions made it look magical. And we were told that Trinidad, on the southern coast, has the best architecture, music and food in all of Cuba.

4. Bring enough money. You can’t use credit or debit cards from the United States. But once in the country, you can exchange your dollars for CUCs, with a 10 percent penalty/tax.

Unless you’re on an “all-inclusive” tour, budget accordingly. We thought prices would be much lower than back home. Entrees in most touristy restaurants were between $12 and $18, and some taxi drivers will tell you “$20” when asked about a 10-minute ride. Negotiate. 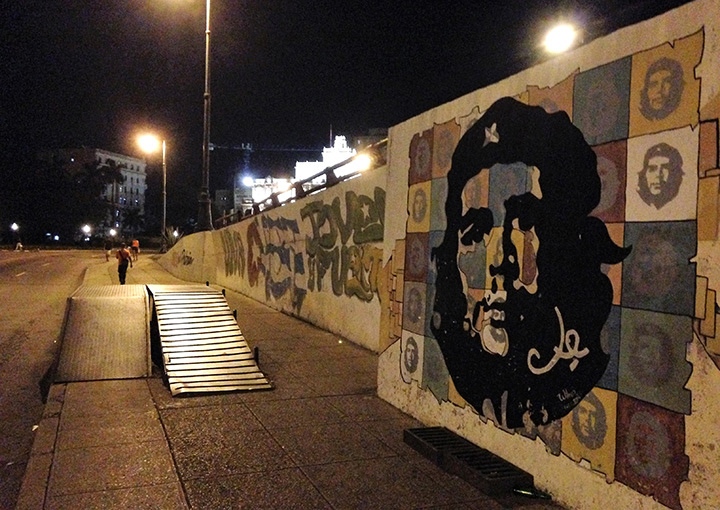 5. If they come for you, don’t go
This seems obvious, but we still got taken. Amelia warned us not to venture out with anyone who beckoned us away from where we were headed. In the spirit of adventure, we ignored her. As a result, we ended up paying for a round of drinks and appetizers for strangers. Nothing bad happened, but how embarrassing. Being on a tour – or heeding Amelia’s advice – would’ve prevented this.