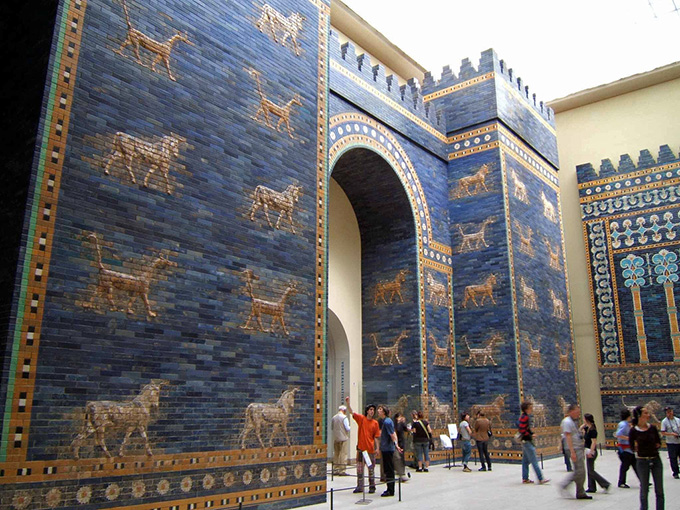 After 15 years of German Reunification, Berlin Museums on Museum Island have allowed the city to reemerge as a premiere European arts destination. Other acclaimed museums and art galleries sprinkled around the city keep nearby coffeehouses buzzing a well. Have your art and coffee straight.

Bode Museum
Opened in 1904, the northern tip of the Museum Island devoted to the Renaissance art. When the opened, the high arts of painting and sculpture were for the first time, presented side by side on an equal footing — radically from traditional museums. The building was badly damaged in World War II and underwent decades of restoration and expansion of its collections after the 1990s German reunification, the museum reopen in 2006; Contrary to the original concept, it now principally houses the Sculpture Collection and the Museum of Byzantine Art.
DAYS & HOURS: Fri-Wed 10:00-18:00, Thu 10:00-20:00
ADDRESS: Am Kupfergraben
TRANSIT: U-Bahn U6 (Friedrichstraße), S-Bahn S1, S2, S25 (Friedrichstraße); S5, S7, S75 (Hackescher Markt); Tram M1, 12 (Am Kupfergraben); M4, M5, M6 (Hackescher Markt)
PHONE: +49 030 266424242
WEBSITE: http://www.smb.museum/en/museums-and-institutions/bode-museum/home.html

Egyptian Museum
It encompasses masterpieces from different eras of ancient Egypt: from ornate statues, colourful reliefs, exquisite craftwork and delicate papyri to stone sarcophagi weighing several tonnes and examples of monumental Egyptian architecture. The collection is a testament to the accomplishments of the period between 3000 BCE and the beginnings of the Roman Empire. Perhaps best known for the world-renowned bust of Queen Nefertiti, whose paint work has survived without restoration since the Amarna period, other highlights of the exhibition include a series of exceptional portrait busts of the royal family and members of the court. One of the most important works from the late Egyptian period is the expressive ‘Berlin Green Head’ named after the colour of its stone
DAYS & HOURS: Fri-Wed 10:00-18:00, Thu 10:00-20:00
ADDRESS: Am Kupfergraben
TRANSIT: U-Bahn U6 (Friedrichstraße), S-Bahn S1, S2, S25 (Friedrichstraße); S5, S7, S75 (Hackescher Markt); Tram M1, 12 (Am Kupfergraben); M4, M5, M6 (Hackescher Markt)
PHONE: +49 030 266424242
WEBSITE: http://www.smb.museum/museen-und-einrichtungen/aegyptisches-museum-und-papyrussammlung/home.html

Pergamon Museum
Built from 1910 to 1930, the museum houses original-sized, reconstructed monumental buildings such as the Pergamon Altar and the Market Gate of Miletus consisting of parts transported from Turkey. The museum includes the antiquity collection, going back to excavations in Olympia, Samos, Pergamon, Miletus, Priene, Magnesia, Cyprus and Didyma. You will be astonished at some of the Islamic, Assyrian, Sumerian and Babylonian art, historical buildings, reliefs, cultural objects and jewelry. The main attraction is the Mshatta facade, which originates from an unfinished early Islamic desert palace located near Amman, Jordan. It was a gift from the Ottoman Sultan Abdul Hamid II to Emperor Wilhelm II of Germany. The Islamic Art Museum also regularly hosts temporary exhibitions of modern art from the Islamic world. Don’t let the staggered renovation work stop you; this is a must see in Berlin any day of the year
DAYS & HOURS: Fri-Wed 10:00 – 18:00, Thu 10:00-20:00
ADDRESS: Bodestraße
TRANSIT: U-Bahn U6 (Friedrichstraße) and S-Bahn S1, S2, S25 (Friedrichstraße)
PHONE: +49 (0)30 266 412889
WEBSITE: http://www.smb.museum/en/museums-and-institutions/pergamonmuseum

German Museum of Technology
The museum presents a broad spectrum of old and new technology, coupled with Germany’s role it their development. The museum’s main emphasis originally was on rail transport, but today includes exhibits of other industrial technology. In 2003, it opened both maritime and aviation exhibition halls in a newly built extension. The museum also contains a science center called Spectrum and a major roadway and computer exhibits.
DAYS & HOURS: Tue-Fri 9:00-17:30, Sat-Sun 10:00-18:00
ADDRESS: Trebbiner Straße 9
TRANSIT: U-Bahn U1, U7 Möckernbrücke and U1, U2 Gleisdreieck; S-Bahn S1, S2, S25 Anhalter Bahnhof
PHONE: +49 30 90254-0
WEBISTE: http://www.sdtb.de/Home.623.0.html

Berlin Jewish Museum
Opened in 2001, the complex consists of a baroque Old Building, a postmodern Libeskind Building, Glass Courtyard, and new Academy. The postmodern building architecture by Daniel Libeskind became major visitor attraction. The museum’s collections are based on intercultural understanding and some have been honored with the Jewish Museum’s Prize for Understanding and Tolerance. “Two Millennia of German Jewish History“ presents Germany through the eyes of the Jewish minority. The exhibition presents intellectual and personal legacies through the eyes of Jewish merchants and entrepreneurs plus soldiers who fought in World War I. Another exhibition focuses on the redevelopment of Berlin into a European metropolis.
DAYS & HOURS: Mon 10:00-22:00, Tue-Sun 10:00-20:00
ADDRESS: Lindenstraße 9-14
TRANSIT: U-Bahn Französische Straße, Friedrichstraße, Hausvogteiplatz
PHONE: +49 030 259 93 300
WEBSITE: http://www.jmberlin.de/main/EN/homepage-EN.php

Charlottenburg Palace
Commissioned by Sophie Charlotte in 1695, the wife of Friedrich III,. It includes many baroque and rococo decoration. A large formal garden surrounded by woodland was added behind the palace, including a belvedere, a mausoleum, a theatre and a pavilion. The palace was badly damaged in World War II, but has since been reconstructed. King Friedrich I of Prussia appointed Johann Friedrich von Eosander architect and sent him to study architectural developments in Italy and France, particularly the Palace of Versailles. On his return in 1702, Eosander began to extend the palace, starting with two side wings to enclose a large courtyard, and the main palace was extended on both sides. Sophie Charlotte died in 1705 and Friedrich named the palace and its estate Charlottenburg in her memory.
ADDRESS: Spandauer Damm 10-22
DAYS & HOURS: Tue-Sun 10:00-17:00
TRANSIT: Richard-Wagner-Platz U-Bahn Station
PHONE: +49 (0) 331.96 94-222
WEBSITE: http://www.spsg.de/en/palaces-gardens/objekt/schloss-charlottenburg-altes-schloss/

Checkpoint Charley Museum
The Museum Haus am Checkpoint Charlie, founded by human rights activist Dr. Rainer Hildebrandt, is a museum like no other; from its humble beginnings in October 1962 as a two-and-a-half room display about the newly erected Berlin Wall, the museum has evolved into a more than 2000m2 exhibition that explores not only the history of the Berlin Wall and the stories of those affected by it, but also looks at the challenges facing us today as we struggle for worldwide recognition of human rights and freedom. Discover objects used to escape over, under and through the Berlin Wall, and read the stories of those daring escapees who risked their lives to win their freedom or die trying
DAYS & HOURS: Mon-Fri 09:00—18:30
ADDRESS: Friedrichstraße 44
TRANSIT: U-Bahn U6 Kochstraße, U2 to Stadtmitte
PHONE: +49 30 253 725-0
WEBSITE: http://www.mauermuseum.de

Berlin Museum of Natural History
Opened in 1810, the museum’s mineral collections date back to the Prussian Academy of Sciences of 1700. Historic zoological specimens include those recovered by the German deep-sea and South Polar expeditions, expeditions to paleontological fossil beds in Tanzania. The collections are so extensive less than 1 in 5000 specimens is exhibited, and they attract researchers from around the world. The mineral collection represents 75% of the minerals in the world, a large meteor collection, the largest piece of amber in the world; exhibits of the now-extinct quagga, huia, and Tasmanian Tiger, and Bobby the gorilla, a Berlin Zoo celebrity from the 1920s and 1930s.
DAYS & HOURS: Tue-Fri 09:30-18:00, Sat, Sun & holidays 10:00-18:00
ADDRESS: Invalidenstrasse 43
TRANSIT: U-Bahn U Naturkundemuseum
PHONE: +49 030 2093-8591
WEBSITE: http://www.naturkundemuseum-berlin.de/en/