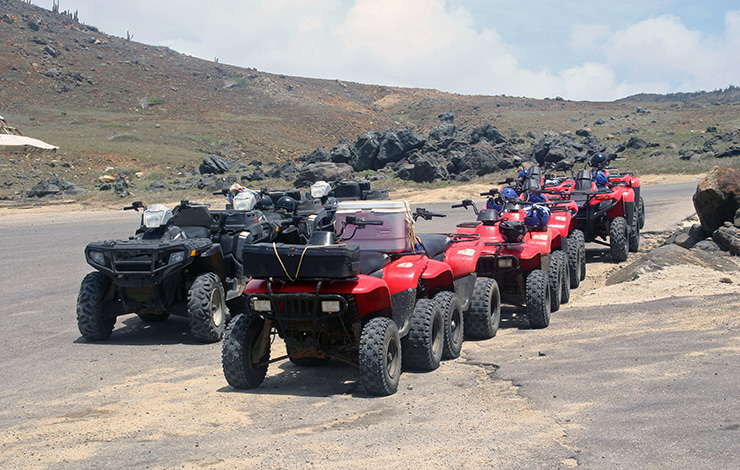 Queen Beatrix International Airport
AUA Airport is located in Oranjestad, Aruba. It has flight services to the United States, Trinidad and Tobago, most countries in the Caribbean, the northern coastal countries of South America, Canada, and some parts of Europe, notably the Netherlands. It is named after Princess Beatrix of the Netherlands, the now-retired Queen and former head of state of Aruba.

Roadways
Aruba is 20 miles long and 6 miles wide. Aruba highway system radiates from Oranjestad. H1 signifies the first highway that runs north. The numbering continues sequentially in a clockwise direction. The most popular highways throughout the island is the A. B. C. Highway (Adams/Barrow/Cummins). Driving is on the right in Aruba, like America, most of Europeans and most of South America. A lot of visitors love to go around the island by jeep, small scooter or motorcycle because it’s a terrific way to get around the island. But is also possible to rent a Harley or do an island tour with a motorcycle.

Note that Aruba has a few two lane roundabouts. Vehicles in the inner most lane of the roundabout have the right of way. The speed limit on regular roads is 37 mph (60 kph), unless otherwise posted.

Public Buses
The mini-bus system called Arubus, is popular public transportation throughout the island. This is cheap, convenient and comfortable method of transportation, with bus stops being located in front of almost every hotel or resort, and waiting time for a bus is usually being less than half-hour long. If you’re on vacation, you will enjoy mingling with locals on their terms.

Taxis
Taxis don’t have meters. The fares are set by the government of this small island. But like anywhere else in the world, confirm fares before you get into the taxi. Drivers do not accept anything over $20 US bills. Prices are per taxi, not per person.

Boating
Boating to and from Aruba requires following all international and local laws. If arriving by boat, you must enter an approved port of entry, which means stopping by the harbormaster first at Oranjestad.

National law protects the coral reefs. Consequently, eco-friendly boaters should not drop anchor outside of areas approved by Aruba government in order to protect the corals and island marine life that depend on them.