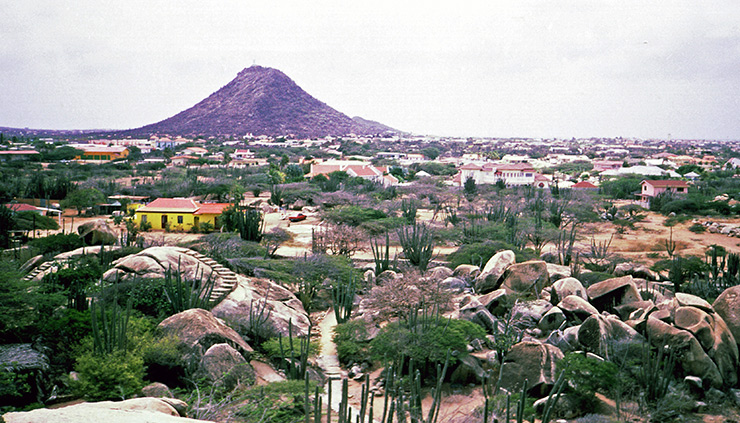 Arikok National Park
Park land area encompasses the three primary geological formations that shape the island of Aruba: The Aruba lava formation, a quartz diorite formation and a limestone formation extending inward from the coastline. These formations have played an important role, not only in supporting unique, indigenous plants and wildlife, but by influencing historic human settlement and activity patterns on the island. Though Aruba’s most photographed and largest Natural Bridge collapsed in 2005, the Baby Natural Bridge next to it thrives as a tourist attraction. Additionally, the park features rock outcroppings, boulders and crevices between the various formations create micro-climactic conditions that support unique examples of indigenous flora and fauna. As a result, the park is the habitat of several animal species found only in Aruba including two snake and lizard species. You could easily spend several hours here so consider taking the hiking tour.
WEBSITE: http://www.arubanationalpark.org

Bushiribana Gold Mills
In the 1500’s, adventurers traveled throughout the Caribbean in search of gold and silver. According to legend, one of these treasure islands was named “Oro Ruba,” which means “Red Gold.” today we shorten it to Aruba. Thus, a colorful history of gold prospectors shaped the island’s history. Bushiribana Gold Mill Ruins on the northeast coast, at the tip of the Spanish Lagoon. These mills processed gold ore from mines in the nearby hills since 1824. In total, they produced more than 3 million pounds of gold. Remnants of this once bustling mill are still visible in a picturesque coastal setting near Frenchman’s Pass.

Caves
Along the island’s windward coast, shallow cave formations invite you to look inside damp chambers, ancient rock drawings, and plenty of stalagmites and stalactites greet you. The 100-foot long Guadirikiri Cave is famous for its two chambers, illuminated by the sunlight streaming through holes in the roof. In the darker portions of the cave nest hundreds of harmless bats. Fontein Cave is the most popular of the caves as it is the only one that has the drawings of the ancient Arawak Indians on the ceilings. Huliba Cave is also known as the Tunnel of Love because of the heart shaped opening at its entrance. You will need flashlights to explore the 300-foot-long passageway. Book a local tour guide to see these wonders.

Golfing
Though the island won’t win awards for best golf courses in the Caribbean, Tierra del Sol Golf Course in the north, will ably provide a fix for duffers. Constant tradewind conditions proves both a challenge and a pleasure, while enhanced by sweeping views of the coastline and rolling greens landscaped with water features and cactus hazards. A narrow course of 9 holes at Divi Links also provides nifty attractions, with the wind often guiding the ball in an unintended direction. Nevertheless, a little effort coupled with low greens fees will bag a lot of satisfaction.

Butterfly Farm
Step into a tropical garden teeming with butterflies from around the globe and prepare to meet some of the world’s colorful unusual winged-creatures. Observe the life cycle of these fascinating animals from egg to caterpillar to chrysalis to butterfly. Tour guides entertain you with commentary on butterfly habits and the miracle of metamorphosis. Arrive early and witness new butterflies emerging from their chrysalis to first flight. Your admission ticket gives you a free pass for the rest of your vacation, so come early and visit us often.
ADDRESS: across from Aruba Phoenix and Aruba Resorts in Palm Beach

Aruba Aloe Museum & Factory
Back in 1840, the aloe vera plant was introduced in Aruba, influencing everything from art and architecture to health and healing. The first aloe vera were planted on 150 acres at Aruba’s Hato Plantation. Soon, two-thirds of Aruba was covered with aloe vera plants and Aruba became the world’s largest aloe exporter. Locals claim that the intense southern Caribbean sun and Aruba’s desert environment intensify the plant’s natural healing qualities, which in gel form, revitalize skin. Take a tour through the state-of-the-art Aruba Aloe Factory and see the production process as tour guides explain all you want to know about the aloe plant and the 160-year old aloe history of Aruba. Of course there’s a well stocked factory store too.
ADDRESS: Pitastraat 115, Hato
PHONE: 297-588-3222
WEBSITE: http://www.ArubaAloe.com

Museo di Deporte
Francisco Chirino is the founder of the Sports Museum dedicated to the achievements of Aruban and international athletes past and present and to inspire a new generation of athletes. It displays artifacts from 29 sports by featuring 2000 pieces of local and international memorabilia, including pins, scrapbooks, photos, trophies, uniforms, and certificates. Among a proud roster of Arubian athletes are the RCA soccer team that won championships forty times in its seventy years of existence. Evelyn Farrel, the first woman and Aruban to participate in the Los Angeles Olympic Games in 1984 in the 100-meter event. Sidney Ponson is now pitching for in Major League Baseball.
DAYS & HOURS: Mon–Sat 9a–Noon & 5p–7p
ADDRESS: Alto Vista 67, Noord
PHONE: 297-587-2397

Model Train Museum
Seems strange that a small island without trains would have such an interesting model train museum. In addition to train videos, a play-table with choo-choo trains in action, a large collection of model trains, airplanes, automobiles and buses are found at the Model Train Museum in San Nicolas on the way to Baby Beach. Turns out the collection includes the contributions of returning tourists from Germany, USA, UK and The Netherlands dating back to 1895.
DAYS & HOURS: Tue-Sat 10a–5p
ADDRESS: Koolbaaibergstraat 12, San Nicolas
PHONE: 297-584-7321

Fort Zoutman Historical Museum
Centuries ago, when settlement was permitted by the Dutch, Paarden Baai (Horses Bay) in Oranjestad became an intermediate harbor for trade between Curaçao and Venezuela. Built in 1798 to protect against pirates and enemies, Fort Zoutman is Aruba’s oldest building. Ironically, the fort was named after Dutch Rear Admiral Johan Arnold Zoutman who never stepped foot on Aruba, but defeated the English in the North Sea to ward off an English attack in 1799. Willem III Tower was built in 1868 served as both a lighthouse and public clock tower. The light in the tower was extinguished in 1963. It has housed government office, a police station, jail, tax office, courtroom, library and post office. It reopened as the Historical Museum in 1984 and is a fitting place to hold the Bon Bini Festival every Tuesday evening (6:30p–8:30p) celebrating the island’s culture and history. The collection is mostly made up of donations from citizens, such as the exhibiting depicts the development of Aruba up to the 1920’s when the LAGO oil refinery came to Aruba.
DAYS & HOURS: Mon-Fri 8:30a–4p
PHONE: 297-588-5199

Numismatic Museum
Fifty years ago, when the late Mario Odor was gardening in his yard, he came upon his first coin dating back to the late 18th century. Thus, began a collection that grown to more than 33,000 different coins and currencies dating back as far as 400 BC. Housed in an authentic cunucu house that was moved from the main street, the museum boasts of primitive and strange coins, as well as counter-stamped, center-holed, scalloped, square, wooden, comemoratives, and token coins.
PHONE: 297-582-8831
WEBSITE: http://www.museumaruba.org

Archeological Museum
Amerindians left behind ornaments, shells, ceramics, amulets and burial practices. This renovated historic Ecury complex in Oranjestad was transformed and enlarged to a modern museum that preserves Aruba’s Amerindian cultural heritage. The oldest part is a cunucu house built in 1870 by the grandparents of Boy Ecury, a young Aruban hero of World War II who lived in the house from 1922–1937. The original buildings that house the welcome area, cafeteria, educational center and offices. They are now integrated with a new building housing a state-of-the-art conservation methods preserve and present 3 periods of Amerindian habitation: Pre-Ceramic period of 2500 BC – 1000 AD when semi-nomadic bands of Amerindians migrated from the South or Central American mainland. Ceramic Period of the Caquetio Indians, the hunters-fishers-gatherers who inhabited Aruba from 900 – 1515 AD, until enslaved and taken to Hispaniola. And the Historic Period from 1515 – 1880 AD. The first floor is devoted to the lifestyle of the early inhabitants of the Ceramic Period. The built-to-scale maloca hut of the Caquetio Indians dominates the main gallery. The second floor is dedicated to cultural and religious practices and the influences of neighboring societies on mainland South America.
PHONE: 297-582-8979

Donkey Sanctuary
A herd of donkeys, in their patchwork of coats, from grey to deep chocolate brown, floppy ears and inquisitive personalities, often enchant visitors. They were once the major mode of transportation for island residents trundling down cactus-lined pathways and pulling carts. When cars arrived, a large number of donkeys were left wandering to search for food and water. Since 1997, 40 donkeys have come to live at the sanctuary in Santa Lucia, with an additional 15 donkeys housed in Bringamosa. Both guest-friendly sanctuaries provide a fun environment to interact with donkeys and support them through purchase of donkey-themed souvenirs.
PHONE: 297-584-1063
WEBSITE: http://www.arubandonkey.org

Museum of Antiquities
Louis XV Antiques & Curiosities can be found inside a complex built with antique building materials from the 17th century. The roof and the onion-shaped red copper towers house 23 showrooms of unusual items from Aruba and South America. On the last Sunday of the month, local Aruban people sell their goods at a flea market.
DAYS & HOURS: Mon-Fri 9a-5p, Sat 10a-2p
PHONE: 297-741-5640