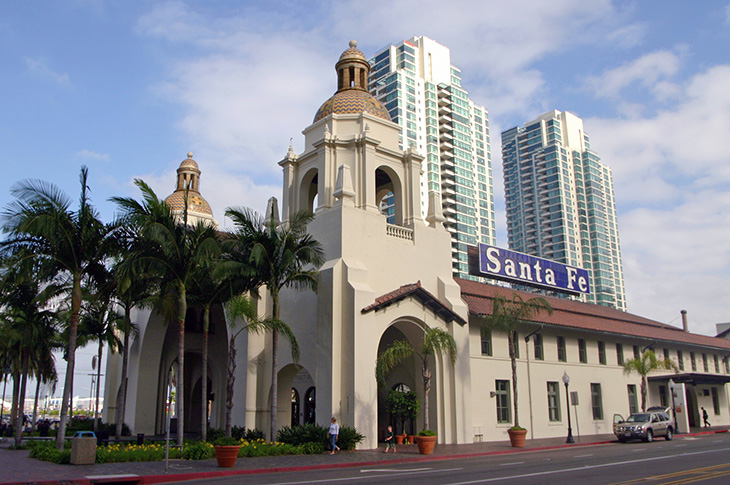 San Diego International Airport (SAN) is a single-runway, 3-terminal airport with domestic, Hawaii and Mexico flights serving 17 million passengers each year. This well-landscaped airport features a large selection of shops, cafes, lounges and other passenger amenities. One of the more interesting views is to watch jets coming in to land just over a residential hillside and I-5 Freeway. SAN Airport Map.

San Diego Trolley is the 4th busiest light rail system in America. The 3 line system runs through tunnel, aerial and dedicated surface lanes over 54 miles to 53 stations, you can reach half of San Diego attractions without driving hassles. For best value, purchase a 1-to-4 Day Trolley Pass. That gives you enough time to explore many popular sites on SAN DIEGO TROLLEY MAP

San Diego’s famous Tijuana Trolley, is officially called the “Blue Line.” It starts at America Plaza (next to Santa Fe train station), then ends at San Ysidro Transit Center on the U.S. side of the border with Mexico. From the transit center, you with a passport, walk 2 block pedestrian overpass to Tijuana, Mexico. For typical day trips to explore Tijuana’s tourist area, riding the Blue Line is smarter than driving because you can walk back to the U.S. without significant delay. Driving to Tijuana fools you because you enter Tijuana quickly, but it takes 2-3 hours waiting in freeway border-check lines to return to the U.S.

The San Diego Trolley system is expanding 11 miles northwards from Old Town Center to University of California at San Diego and Westfield University Towne Centre. Targeted opening for the extension is 2021.

If you get motion sickness, buy dramamine 30-60 minutes before a cruise. On a cruise, sit in the rear of the lower deck where motion sensation is reduced.

San Diego Cruise Port
DESCRIPTION: Featuring a spectacular natural harbor in the southwestern tip of the United States, San Diego is becoming a major Port of Call for the West Coast cruise industry whose routes span from Seattle to the Mexican Riviera, and are increasing in frequency. Royal Caribbean, Carnival, Holland America, Celebrity and smaller cruise lines now have claim a San Diego port of call. You may drive onto the pier by presenting your ID and a ship ticket for sailing on that specific date. All luggage must have your name and address attached. You will be required to show a passport and cruise ticket to enter the cruise terminal.
ADDRESS: Harbor Drive at Broadway
PHONE: 619-686-6200 port office
WEBSITE: http://www.sandiegocruiseport.com/cruise-san-diego-cruise-ships.html

Mission Bay Cruises
DESCRIPTION: For those who prefer a taste of historical boating near Sea World, the Bahia Belle stern wheeler has evening cruises. For info about bay cruises charter boats, and diving in San Diego
WEBSITE: http://www.sdwaterfront.com

Old Town Trolley Tours of San Diego
DESCRIPTION: Enjoy a circular 32-mile tour of San Diego and Coronado in tour-friendly wheeled trolleys that have been running since 1989. Tour guides are knowledgeable about the history and anecdotes of the region – they don’t mind tossing in a few jokes either.  If your timing is right when crossing the Coronado Bridge, you’ll see NAVY Seals jumping from helicopters into the bay for training exercises. You can hop on or off at any stop along the way, but be sure to watch the time, since time flies when you’re having fun. If you only plan to ride the trolley from end-to-end, it takes 2 hours so be sure you’ve eaten in advance and carry bottled water with you. Considering that you can leave you car parked all day while hopping on-off to see about 75% of the main tourist attractions, the tour is a great value. Best places to board downtown are Harbor Drive at Broadway and at Seaport Village. The tour includes a free souvenir map of the route.
CREDIT CARDS: yes
WEBSITE: http://www.trolleytours.com/san-diego

SEAL Tours
DESCRIPTION: If you have a sailor’s perspective of San Diego Bay, this is your tour. Operated by the same company as Old Town Trolley Tours, affable narrators know their craft as you enter a modified tour bus. Once it enters the water, the tour bus changes its form of locomotion to that of a motorboat. The narrator is full of entertaining chatter about every nuance of the bay from the laziest sea lion to the sharpest fishing pelican. No need to worry about the narrator getting distracted about your safety in the vessel. A certified captain guides the ship while the other person narrates. The tour last about 90 minutes. Best places to board downtown are Harbor Drive at Broadway and at Seaport Village
CREDIT CARDS: yes
WEBSITE: http://www.sealtours.com

San Diego Freeway Network features 10-12 lanes on several freeways, which might be jarring to visitors from smaller cities. It has all the latest innovations in carpool lanes, metered entrances, freeway status signs and is well maintained. Residents usually refer to freeways by number.

Crossing Coronado Bridge is the most enjoyable drive in San Diego. Allow extra time on the clogged 5, 8, 15 and 805 freeways during morning and evening commute hours. A helpful thought is that San Diego Freeway Network experiences less congestion than Los Angeles. Its only a good idea to drive to Mexico, if you going south of Tijuana to vacation in coastal resort towns like Ensenada. After vacationing at a Mexican coastal resort for a few days, you will find the 2-3 hour Mexico-U.S. freeway border-check a bit more tolerable on your return trip to San Diego.