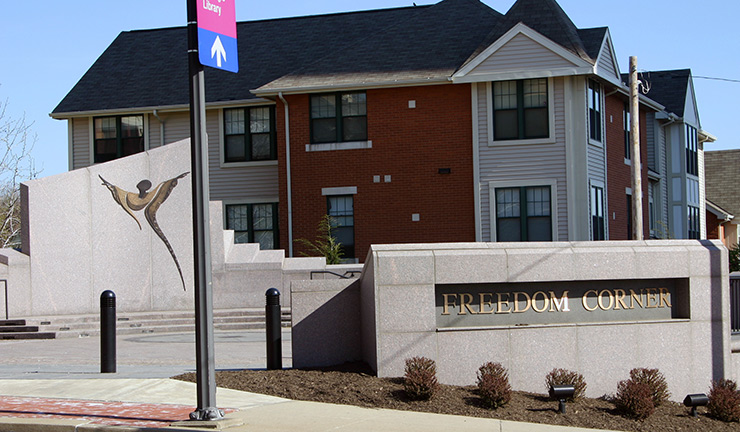 Pittsburgh History is incomplete with an account of the African American community. Black folk came en route to freedom and later in search of economic opportunity. As early as 1750, both French and British forces seeking control of America’s waterways to the west sheltered fugitive slaves. The city was founded in 1758. One of the nation’s first free black communities took hold in Pittsburgh in the aftermath of British victory and its claim of the point of land situated at the confluence of three mighty rivers: Monongahela, Allegheny and Ohio. In the years to follow, Pittsburgh became a focal point of the western frontier, moving goods and people into the Mississippi Valley, making it a natural stop on the Underground Railroad.

The Monongahela and Allegheny river fronts teemed with the flow of commerce, and nowhere was the activity greater than the since demolished Monongahela House. At the time one of the city’s finest hotels and a center of antislavery activity, its staff included 300 free blacks that had daily contact with wealthy Southern businessmen visiting with their entourage of enslaved people. A few blocks away on Third Street, African American businessman John Vashon operated a barbershop and Underground Railroad station.

Martin Delaney, a writer, scientist, army officer and physician, who founded Pittsburgh’s first African American newspaper, The Mystery (1843-1847). Delaney, the first black Major in the U.S. Army and among the first African Americans admitted to Harvard Medical School, was famous for a number of heroic efforts including his fight against Pittsburgh’s cholera epidemic of 1854. Today, visitors can find a historical marker at Third Avenue and Market Street near the site where The Mystery was first published.

A century later jobs in the heavy metal industry made Pittsburgh a key destination for African Americans moving North. The Monongahela River became strategically important as the first titans of American industry used Pittsburgh’s waterways to move raw materials and float the finished product down the Ohio River.

Pittsburgh metro area developed into one of the nation’s leading industrial regions generating many good paying blue-collar jobs. By Civil War end, African American population grew from 1,000 to 20,000, as many began to find employment in the iron, steel, aluminum and glass industries. A limited number of African-Americans were welcome due to the labor shortage caused by European-American males who lost lives or limbs in the Civil War. In only a few years, that welcome became restrictive while opening he door to more European immigrants.

Cumberland Willis Posey, Sr., the son of a slave, left his family’s farm to apprentice as a steamboat operator. Posey became the first African-American to receive a license as Chief Engineer. After moving to Homestead in 1892, invested his money and expertise in the manufacture of coal boats. He started the Diamond Coke and Coal Company in 1890, the largest African-American owned business in the region, which at its peak employed 1,000 workers. His son, Cumberland Posey, Jr., forever shaped America as owner of the Homestead Grays baseball team. His was clearly the exception, since the unions prevented most African-Americans form moving up in the crafts and limiting the number of African-American men who could work there at all.

Consequently, many African-Americans turned their hand to unskilled domestic work, which also reduced their choice of communities to live in. The majority settled in the eastern hill section of the city closest to downtown – The Hill District. During and after World War I, while Detroit, Chicago, Philadelphia and Cleveland enjoyed a boom in the black employment, most African Americans worked menial jobs in Pittsburgh. Then by necessity during World War II’s labor shortage, metal and glass industry jobs opened to Pittsburgh’s African Americans.

Though African-Americans suffered job and housing restrictions, there was one unrestricted black voice. The Pittsburgh Courier newspaper presented unfiltered views as the region’s premier black newspaper from the 1930-1960s. Marcus Garvey, Elijah Muhammad, and W.E.B. Du Bois were just a few of notable contributing writers. During this time, Crawford Grill and Webster Grill were in their heyday for nightlife. One could find many visiting ballplayers and musicians staying at Ellis Hotel for Negroes in the Hill District. Pittsburgh was home to two famous the Negro Leagues Baseball teams, the Pittsburgh Crawfords and Homestead Grays. Legends such as Josh Gibson, Satchel Paige and James “Cool Papa” Bell could be seen hanging out in the Hill District on a regular basis. The city also had a booming jazz scene that featured Lena Horne, Roy Eldridge and in later years, George Benson, Errol Garner and Stanley Turpentine.

When steel jobs opened in Pittsburgh and its suburban cities like Homestead, Braddock, McKeesport, Duquesne, Clairton and McKees Rocks, African-Americans moved in. The iron and steel industry has always been more cyclical than the automotive industry, so the Last Hired, First Fired practice was always more evident for African Americans. In good times you heard more Jazz. In bad times you heard more Blues. This flux between good and bad job times can be seen in the novels of John Edgar Wideman and the theatre screenplays of August Wilson and Rob Penny, each of whom are Pittsburgh natives.

Unfortunately, Pittsburgh, like most large American cities was rocked with the twin evils of drugs and police brutality in the 1990s. The African-American community outcry about police brutality reached a national audience via the Johnny Gammage case. To outsiders, that outcry may be a little surprising, since compared to most other major cities, Pittsburgh police have a better reputation towards Africans-Americans and the metro area has always had one of the nation’s lower crime rates. But it is equally clear that the “Blue Code of Silence” protecting bad cops prevailed in the Gammage case. That injustice reminded the Black community that its still an Injustice System.