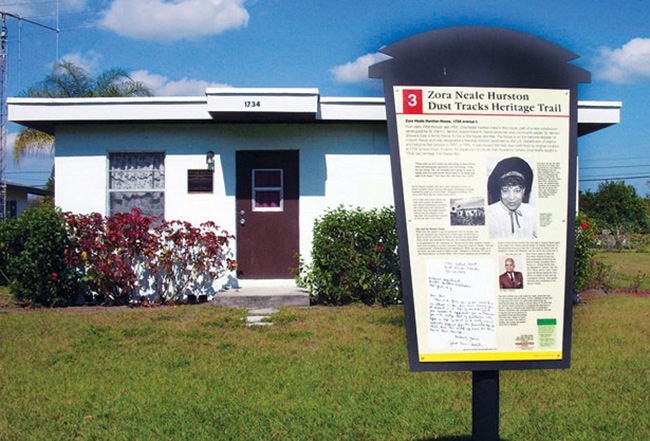 For millennials, Eatonville & Zora Neale Hurston may seem like grasping at nostalgia. If so, then it is equally true that Zora Neal Hurston the foremost literary interpreter of Southern African-American culture. She gave us a lens to view the Ancestors.

As a writer, folklorist, and anthropologist, Zora Neal Hurston is known as the most significant collector and interpreter of Southern African American culture. Hurston was born in Notasulga, Alabama in 1891, but her family later moved to Eatonville, a small town 10 miles north of downtown Orlando. And as far as she was concerned, Eatonville — “a pure Negro town [with a] Black charter, Black mayor, Black town council, Black marshal and all”, was always home.

In 1887, Eatonville became the first black community in the United States to be incorporated and self-governed. The town started with about 300 people and Zora’s father, the Reverend John Hurston, who was the town’s third mayor and the second pastor of the Macedonia Missionary Baptist Church. The family lived on People Street, at the corner of Eatonville’s main street, Old Apopka Road, now known as Kennedy Boulevard, in what Zora called “a one story and a jump house.”

Growing up in a town with black achievement surrounding her, Zora was never indoctrinated with inferiority complex. She was known to be very confident and charming, and once said “Sometimes I feel discriminated against, but it does not make me angry. It merely astonished me. How can anyone deny themselves the pleasure of my company?” Hurston wrote about her life in Eatonville in her books The Eatonville Anthology, Jonah’s Gourd Vine, and her autobiography Dust Tracks on a Dusty Road.

In 1937, Zora wrote in seven weeks in Haiti that she is most known for, Their Eyes Were Watching God. The book has been on many college reading lists throughout the United States and the world, and was made into a TV movie by Oprah Winfrey’s Harpo Productions.

During her heyday, Hurston was one of the leading female voices of the Harlem Renaissance publishing four novels, two books of folklore, an autobiography, and numerous short stories, essays, articles and plays. When she died from a stroke in Fort Pierce, Florida in 1960, her neighbors had to take up a collection to bury her, and they didn’t have money for a headstone.

Ironically, in 1945 Hurston had suggested to W.E.B. Du Bois a “Cemetery for the Illustrious Negro Dead” that would make sure all Black artists were buried with honor, no matter their financial status. Du Bois rejected the idea and it would be more than a decade after her death before her life and works would be celebrated again, when author Alice Walker found her unmarked grave.

In 1973, Alice Walker bought a headstone for Hurston’s grave with this epitaph: “Zora Neale Hurston: A Genius of the South.” Two years later, Walker wrote “In Search of Zora Neal Hurston” for Ms. magazine, launching a Hurston revival. She was instrumental in launching the first annual Zora! Festival in Eatonville in 1990.

Today, the festival is the signature event of the Association to Preserve the Eatonville Community and draws 50,000 locals and tourists with arts and humanities, panels, workshops, musical entertainment, poetry readings, book giveaways, a street festival, art & crafts and food vendors, along with regional and national authors. At the center of town is Zora Neale Hurston Library and the Zora Neale Hurston National Museum of Fine Arts.

The festival also draws celebrities like the late actress Ruby Dee, who attended since the first festival. In 2006, Ruby Dee was festival keynote speaker.