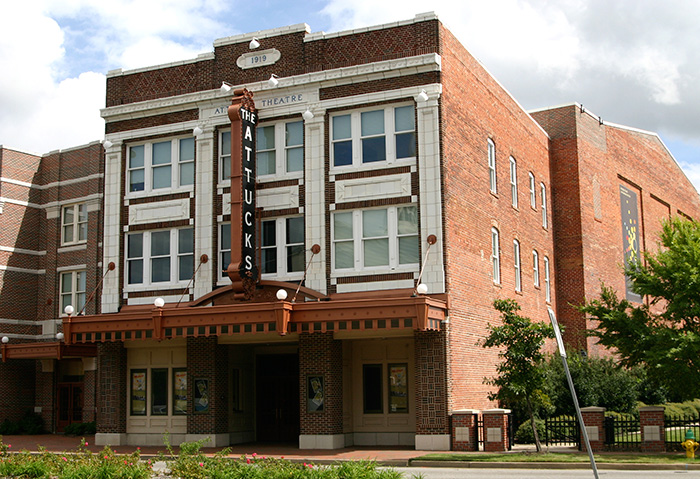 Crispus Attucks Theatre & Cultural Center
DESCRIPTION: This center is named in honor of Crispus Attucks, the first American patriot to sacrifice his life during the Revolutionary War. This theatre building was designed by black architect Harvey N. Johnson and erected in 1919 during Chitlin’ Circuit days, it was known as the Showplace of the South. It was the brainchild of the Twin Cities Amusement Corporation, an enterprise of black businessmen from Norfolk and Portsmouth who developed the Crispus Attucks Theatre as a regional mecca for entertainment and commerce. When it first opened it was a rare Southern example of an early cinema financed, designed and built exclusively by and for African Americans. Now gloriously restored and reimagined as a full-service cultural center, today’s performances include concerts, film festivals, comedy shows, spoken word, talent shows, Afrocentric dance and ballet.
DAYS & HOURS: daily, but event dependent
ADDRESS: 1008-1012 Church Street, Norfolk, VA MAP
PARKING: on street and lots nearby
PHONE: 757-622-4763
WEBSITE: http://www.attuckstheatre.org

L. Douglas Wilder Performing Arts Center
DESCRIPTION: Named in honor of the first Black governor of Virginia, this exquisite and luxurious performing arts venue. Upon entry, a grand staircase and spiral crystal chandelier serve as the focal point catching your eye. Attend a concert or play on its Broadway-quality stage and listen to excellent acoustics for the many and varied musical performances year round. It seats over 1800 patrons.
DAYS & HOURS: event dependent
ADDRESS: 700 Park Avenue at Norfolk State University, Norfolk, VA MAP
PARKING: on premises
PHONE: 757-823-2063
WEBSITE: http://www.nsu.edu/wilder

African American Civil War Memorial
DESCRIPTION: One of the South’s few memorials to Black Civil War veterans or any Union Civil War Veterans. In 1906, the statue’s granite base was dedicated to black soldiers and sailors from all wars. By 1920, sufficient private funds were raised to commission a statue to complete the monument. The statuesque figure of a African-American Union soldier, represents Norfolk native Sgt. William H. Carney, a member of the 54th Massachusetts Volunteer Regiment. Carney was awarded a Congressional Medal of Honor for his heroism in the attack on Fort Wagner, South Carolina on 18 July 1863. When the color bearer was killed, Carney picked up the colors and led the attack, though he himself was wounded several times. Over 100 veterans are laid to rest within the cemetery, most of them from the Civil War and Spanish-American War.
ADDRESS: West Point Cemetery, just west of Elmwood Cemetery MAP