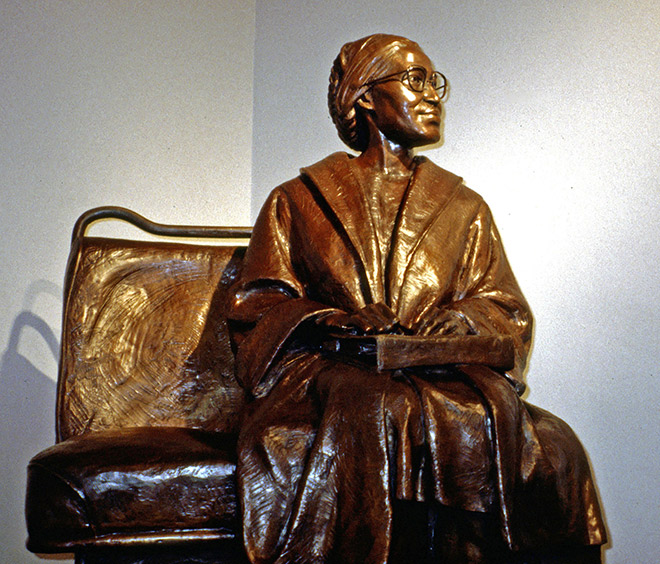 Rosa Parks Museum, Library, Museum & Historic Site
Constructed on the site of the old Empire Theatre, and in front of the bus stop where Parks was arrested for keeping her seat in 1955. There is a marker at the arrest site. Exhibits tell the story of her bravery and the bravery of other civil rights activists and events. Artifacts include an original copy of the Rosa Parks’ finger prints taken by police when she was arrested, as well as a vintage 1950’s Montgomery bus like the one Rosa Parks rode on. Wait for a tour by the museum director, who is knowledgeable about the Civil Rights Movement. This site is located on the campus of Troy State University.
ADMISSION: Adults $5, Children 12 and under $3
DAYS & HOURS: Mon–Fri 9a–5p, Sat, 9a–3p
ADDRESS: 252 Montgomery Street, Montgomery, AL MAP
PHONE: 334-241-8615 or 888-357-8843
WEBSITE: http://montgomery.troy.edu

Freedom Rides Museum
DESCRIPTION: Located at the historic Montgomery Greyhound Bus Station and opened on its 50th anniversary, where on 20 May 1961, an integrated group of 21 college students from Nashville arrived to protest segregationist laws in the South. The Freedom Riders encountered mob violence, but responded with non-violence and courage to help end racial segregation in all interstate transportation. Their methods and courage continue to inspire non-violent protest to change unjust laws worldwide. An award-winning exhibit on the building’s exterior traces the Freedom Rides history — it uses the words and images of Freedom Riders and those who opposed them. Exhibits add additional information on the Freedom Rides and the way in which buildings were designed for racial segregation at that time. Share Your Story, an interactive video exhibit, capture and show thoughts from riders, witnesses, and museum visitors.
ADMISSION: small fee
DAYS & HOURS: Mon–Fri 10a-5p
ADDRESS: 210 South Court Street, Montgomery, AL MAP
PHONE: 334-230-2665
WEBSITE: https://ahc.alabama.gov/properties/freedomrides/

The Legacy Museum
From Enslavement to Mass Incarceration, the museum is situated on a site where enslaved people were once warehoused. Now the 11,000-square-foot museum, only a block from a slave auction space, the Legacy Museum is steps away from an Alabama dock and rail station where tens of thousands of black people were trafficked during the 19th century. Its founded by the Equal Justice Initiative (EJI) committed to ending mass incarceration and excessive punishment, to challenging racial and economic injustice, and to protecting basic human rights for the most vulnerable people in American society. Visitors encounter a powerful sense of place when they confront slave pen replicas, where you can see, hear, and get close to what it was like to be imprisoned awaiting sale at the nearby auction block. First-person accounts from enslaved people narrate the sights and sounds of the domestic slave trade. Extensive research and videography helps visitors understand the racial terrorism of lynching, and the humiliation of the Jim Crow South.
ADMISSION: Adults $10, Students and Seniors $7, Children 6 years and under FREE
DAYS & HOURS: Wed-Mon 9am-5pm
ADDRESS: 417 Caroline Street, Montgomery, AL
PHONE: 334-386-9100
WEBSITE: https://museumandmemorial.eji.org

Civil Rights Memorial Center
DESCRIPTION: The center expands the experience of the Memorial honoring the memory and achievements of those who lost their lives during the Civil Rights Movement. State-of-the-art exhibits and information about Civil Rights Movement martyrs, a 69-seat theater, a classroom for educational activities, a section dedicated to contemporary social justice issues and the. Located behind the center is the Wall of Tolerance Memorial honoring those who died during the Civil Rights Movement. A circular black granite table records the names of the martyrs of the Movement and chronicles the history of the Movement in lines that radiate like the hands of a clock. On a curved, black granite wall behind the table is engraved Dr. King’s well-known paraphrase of Amos Verse 5:24 – “We will not be satisfied until justice rolls down like waters and righteousness like a mighty stream.”
DAYS & HOURS: Mon-Fri 9a-4:30p, Sat 10a-4p
ADMISSION: 2 adults, free for age 17 and under
ADDRESS: 400 Washington Avenue, Montgomery, AL MAP
PHONE: 334-965-8200
WEBSITE: https://www.splcenter.org

National Center for the Study of Civil Rights & African-American Culture
DESCRIPTION: Its mission is to serve as a clearinghouse for information concerning Montgomery’s pivotal role in the shaping of the Modern Civil Rights Movement, and to preserve and disseminate information reflective of socioeconomic conditions, political culture and history of African-Americans in Montgomery. The center executes that mission well. Remarkable exhibits include the E.D. Nixon Collection from the “Father of the Montgomery Bus Boycott” located on Alabama State University campus.
ADDRESS: 915 South Jackson Street, Montgomery, AL MAP
PHONE: 334-229-4106
WEBSITE: http://www.alasu.edu