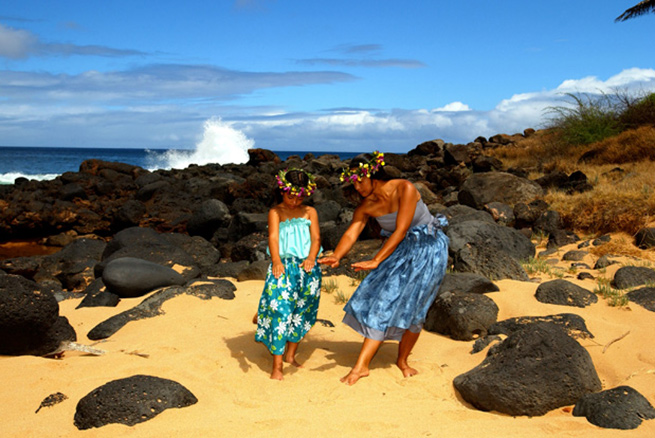 Moloka’i is a perfect solitude getaway largely because its untouched by civilization. The island’s eastern end is secluded and rich with vegetation, as if an emerald carpet covers the mountains and valleys. — Jeanette Valentine.

While a tidal wave of sun worshippers descend on the beaches of Oahu and Maui each summer, just a trickle of travelers opt for the deserted shores of Moloka’i (pronounced “mah lah ky EE”). From the air, the island looks more rugged than the Hawaii of slick brochures and glossy magazines. But the sun kisses its sands just as warmly, and its palm trees stretch skyward just as majestically.

Yet, Moloka’i is largely untouched by civilization. The island’s eastern end is secluded and rich with vegetation, as if an emerald carpet covers the mountains and valleys. Its western side is a dry moonscape wrapped in stillness, silence and solitude.

Moloka’i has earned a reputation as one of the the “most Hawaiian” islands, likely because so many residents are native Hawaiians. Proud to share history and committed to preserving culture, they have successfully campaigned to keep commercial development at bay. Moloka’i is truly a place to get away from it all, with heavy emphasis on “it all.” Kaunakakai, the main city, has no stoplights. Smartphone reception is spotty. Lazy walks on uninhabited beaches, hikes through sacred rainforests and impromptu lessons about local fishing and farming are plentiful. Action junkies, hard partiers and thrill seekers should visit Honolulu or Maui. 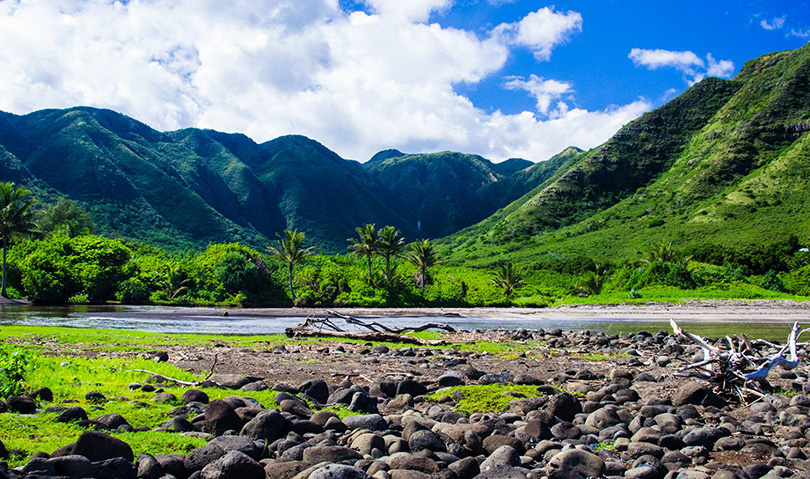 Things to do on Moloka’i

Halawa Valley
You’d no more hike into Halawa Valley without asking permission than you’d stroll into a stranger’s house without knocking. A handwritten sign on the edge of this startlingly green wilderness provides instructions. To paraphrase: come only on a guided tour (see info below), call first for authorization and only approach after receiving the go-ahead.

And nix the smartphone for calling. Your guide will stand with a conch shell on a bluff overlooking the valley. He or she will take a deep breath and give one, long blow – a call for permission to enter. The sound will travel down to Kupuna (meaning respected elder) and revered Storyteller Anakala Pilipo Solatorio, who will respond in kind. On the day we visit, only after we hear his conch in response to our request do we enter the valley for a rendezvous.

Before hiking to the lana’i (patio) on which our host would entertain us, we don Kihei. Hawaiians traditionally wear these large swaths of colorful cloth, which are printed with symbols representing their family’s genealogy.

The Maui Visitors Bureau was kind enough to purchase each in my group a Kihei. We wear them to show respect to Anakala Pilipo. This charming, silver-haired kupuna greets us in an elaborate brown Kihei of his own, accented by several leis made of Kukui Nuts, which resemble large brown stones.

Halawa is a verdant rainforest brimming with dozens of varieties of trees, plants and grasses, lush from more than 240 inches of rain annually. As we sit under Anakala Pilipo’s covered lana’i, the cloudy sky grows darker, the heavens open and a downpour drenches the valley.

To the sound of pelting rain, Anakala Pilipo regales us with stories. He explains, for example, that the ritual of asking permission dates back centuries when visitors approaching the island by boat were only allowed ashore after communicating by conch shell. We learn about his family and the valley’s sacredness.

Most significantly, he emphasizes the importance of absorbing knowledge from the kupunas. “Once they talk to you, you ought to be all eyes and ears,” he says. 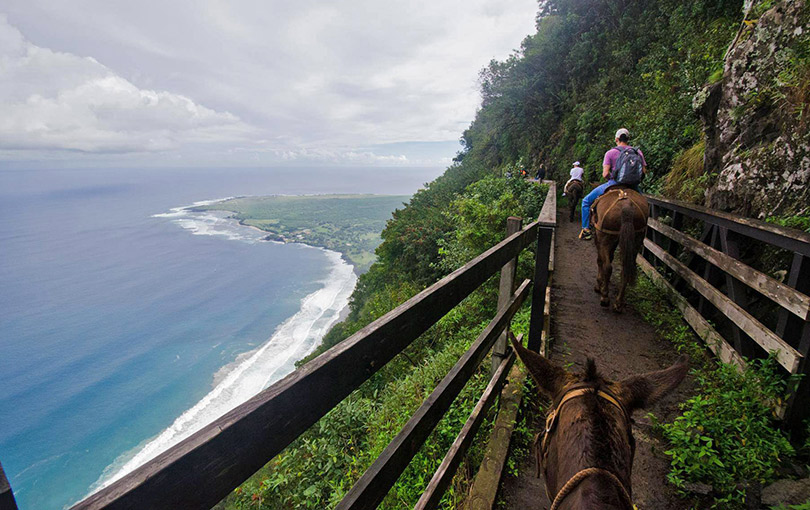 Kalaupapa National Park
I am all set to mount a mule and go clip clopping down the side of a cliff. Short of hiking a three-and-a-half mile terrain or renting private aircraft, it’s the only way to reach beautiful Kalaupapa National Historic Park.

This gorgeous peninsula is home to a settlement for those afflicted with Hansen’s Disease, commonly known as Leprosy. Since 1866, sufferers have been exiled to the enclave, isolated by sea cliffs. In 1872, Father Damien of Belgium relocated to Kalaupapa to improve conditions and introduce the word of God. Known as the “Martyr of Moloka’i”, he contracted leprosy and died at the age 49. The Catholic Church made Father Damien a saint in 2009. On the road to Halawa Valley, we pass Saint Damien Church, formerly St. Joseph Church, one of several he built on Moloka’i. Once down the cliff, visitors board a bus for a two-hour tour of the community. You will learn its history, view Father Damien’s grave and see St. Philomena Church, over which he presided. 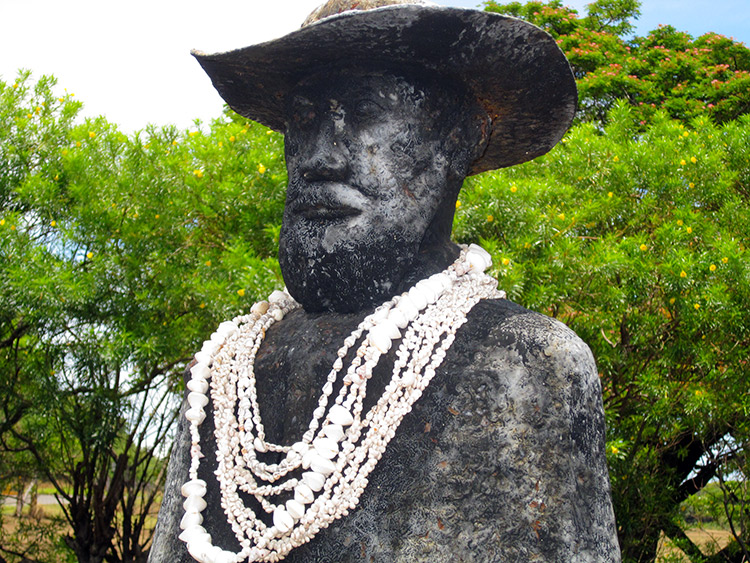 On the day of our mule ride, a storm pummels the island’s north end, dashing our hopes of visiting the park. I’m game to try anyway. But then Buzzy Sproat, a very experienced rider and owner of Kalaupapa Guided Mule Tour, shakes his head and declares, “I wouldn’t do it.” Enough said.

Phallic Rock
Phallic Rock looks like a giant male body part, and its primary claim to fame other than serving as a prop for lewd photos, is to assist with conception. Women who sleep on the oversized boulder are said to conceive more easily. The females in my group gave Phallic Rock a wide berth. The rock is located 200 yards from a ridge that overlooks Kalaupapa in northern Moloka’i.

Kapuaiwa Coconut Grove
I’ve taken hundreds of photos in Hawaii, and a shot of Moloka’i’s Kapuaiwa Coconut Grove is one of my favorites. This thick fortress of palm trees looks like an army of bushy-headed, long-necked sentries standing guard. Legend has it that each one represented a warrior in the great King Kamehameha’s army. Born Lot Kapuāiwa, the king reigned as the Napoleon of the Pacific in the 1700s and 1800s.

His wife, Queen Keopuolani, bathed in a sacred spring-water pool in the center of the grove, where more than one thousand coconut trees shielded her from view. Though bathing in the Queen’s bath was forbidden, many sufferers of skin diseases or other ailments took dips in nearby side pools with healing powers.

Only about a hundred trees remain. The island’s Visitors Bureau warns against venturing inside the grove because falling coconuts can lay you out flat. Luckily, a photograph from the sidelines or from neighboring Kiowea Beach Park at sunset will more than capture the grove’s beauty.

From the city of Kaunakakai, drive east on Highway 460. The Kapuaiwa Coconut Grove will be on the left across the street from Church Row. 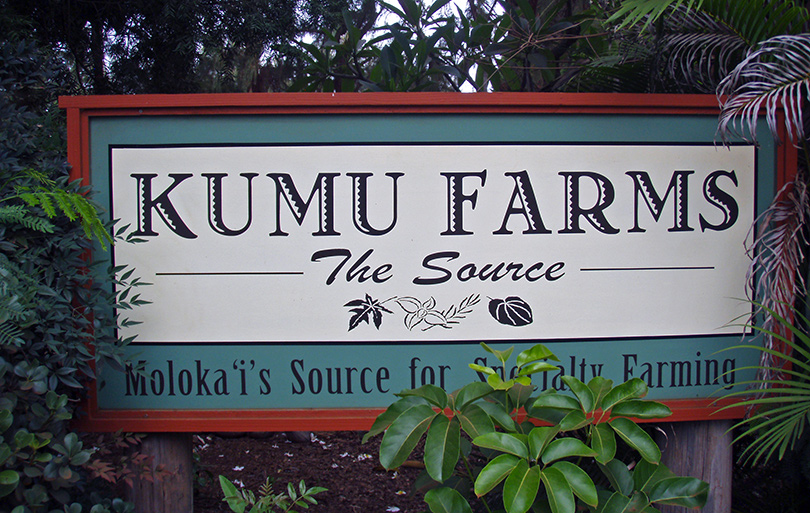 Kumu Farms
Bananas ranked in the basement of my fruit choices until I bit into an apple banana. Shorter and narrower than the regulars, they taste sweeter, as if infused with vanilla. I consume them like candy.

Locally, apple bananas grow on Kumu Farms, just five miles southwest of the airport. The picturesque vegetable and fruit stand is a nice pit stop for picking up produce to stock your condo’s fridge or to pack for a hike.

In front, a white board of daily specials leans again a picnic table. The surface holds flat boxes of papayas, laid out in individual squares like Christmas ornaments. Long bins hold heaps of fresh-picked bounty – some familiar and some defying convention. Besides the apple bananas, there are strawberry papayas, potatoes the color of eggplants and zucchini the color of corn.

If you’re lucky, petite and bubbly Etty Angst will be on hand to point out some bargains and offer a recipe. While we’re there, she relays her favorite for apple bananas: “I fry them with a little butter, until they’re brown on both sides, and add vanilla ice cream.” And Grand Marnier “if you want fancy,” she says.