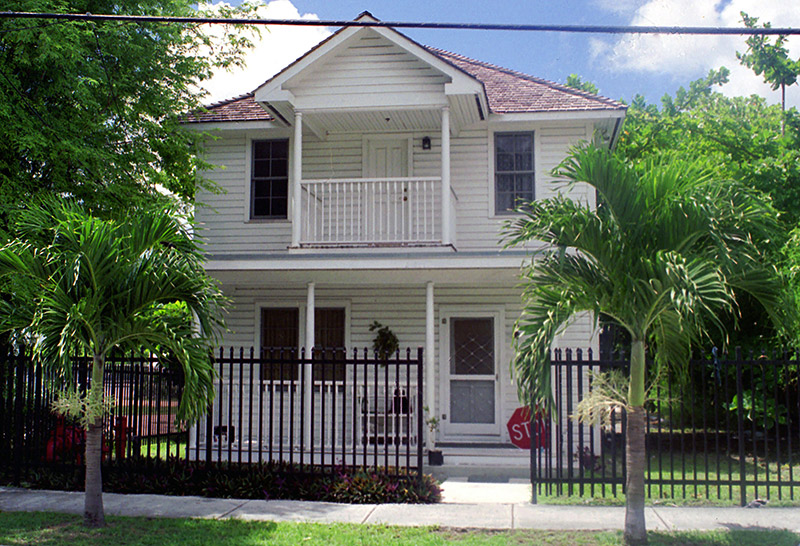 Miami History is the stuff of legend and best selling novels. In search of the Fountain of Youth, Spanish explorer Ponce de Leon first arrived in Florida in 1513. He was accompanied by three African crew members. Extrapolating from his charted route, his explorations led to Spanish settlements in central and northeast Florida.

Over 500 years Ponce de Leon, Miami history eventually became the stuff of real world economics, politics and racial pecking order. Though known to geographers, South Florida was relatively uninhabited until the 1870s. Only nomadic Native-American tribes passed through the region. Bahamians, living only 70 miles of the coast, were familiar with rugged mangrove shoreline and hot tropical climate of South Florida in their maritime explorations. Seeking new opportunity, Bahamian craftsmen traveled to settle in the Miami area known today as Coconut Grove. Prime shorefront property built by Bahamian settlers was testament to the region’s great possibilities. Coconut Grove Cemetery is their final resting place.

The Spanish-American War of 1898 however, attracted more Anglo-Americans to South Florida base-camps. Their arrival in large numbers accelerated formation of the race-based social system. After the war, Anglo-American immigrants swayed politicians to enact Jim Crow Segregation laws. The elevated legal and social status of Anglo-Americans soon translated to higher economic status that marginalized Bahamian-Americans who preceded them and African-Americans who arrived simultaneously.

After the railroads enabled safe passage to South Florida, the laborers were desperate for new work. Real estate entrepreneurs hired those skilled laborers to inexpensively cull wood from local forests and build homes and hotels in and near the mangroves. The most successful real estate entrepreneurs dangled a carrot in front of wealthy Anglo-Americans and Europeans seeking winter mansions on the politically stable mainland of subtropical USA. Such shrewd home-building and marketing drove a real estate boom. Such marketing also attracted gangsters like Al Capone, whose line of work required frequent rest and relaxation.

Like other American cities, Jim Crow Segregation set the tone for Miami race relations. Segregation had one upside. Overtown, was the culturally vibrant and economically sound black district of early Miami. As a regular on the Chitlin’ Circuit, black performing artists and businessmen flocked to Overtown. In the early 1960s, Muhammad Ali trained in Miami Beach, but dined and partied in Overtown.

Then Cold War escalation in our hemisphere and its resultant policy responses by federal and state governments had enormous unintended consequences. In the 1950s-60s, Latin America, African and Southeast Asia were emerging from colonialism and would therefore, choose between Democratic-Capitalism or Dictatorship-Communist-as their forms of government and economy. American leaders preferred they choose Democratic-Capitalism. Russian leaders preferred they choose Dictatorship-Communism. Everything was about to change.

In 1959, Fidel Castro ascended to power in Cuba with a communist dictatorship government. Most Cuban business owners left the country because their businesses would be seized and freedoms limited by the communist dictatorship. Castro’s Cuba represented Russia’s only communist-friendly outpost in North America and thus, would curry financial and military support from Russia.

American leaders feared this communist influence only 90 miles from Florida and that other Latin American nations might choose a communist form government, then affiliate with Russia. To prevent communism spreading beyond Cuba, federal policy cards for South Florida would be reshuffled in a profound way.

The federal government designated Miami to be the point of embarkation and assistance for Cuban immigrants. To use a chess metaphor it was a “Queen” in the Cold War Cuba Policy directed at Russia. Towards America’s Cold War objective, the U.S. government awarded 50 times the amount of business loans and grants to immigrant Cuban businesspersons than to black Miamians in the 1960s. The federal government also persuaded Miami, Dade County and Florida officials to award public service jobs and more home loans to Cuban immigrants. As a result, U.S. government leaders could parade successful Cuban immigrants to Latin America as an example that Democratic-Capitalism works better than Communist-Dictatorship.

Anglo-Americans could own businesses and live anywhere in South Florida. Like the rest of America, many chose new suburban communities with larger homes, new malls and jobs nearby. New freeways to suburban communities were built. The first purpose of the Interstate Highway System was to easily transport military equipment and forces nationwide, so extending I-95 Freeway to Miami was a top priority. Given the unprecedented geo-political-racial-transportation climate, swift policy decisions with bad unintended consequences were inevitable.

Since Black Miami was a Pawn on the chessboard of Cold War Cuba Policy, federal and state governments permitted construction of a major freeway interchange in the heart of economically stable Overtown. The freeway interchange had a dagger-like effect on the black community. With only historic churches remaining as anchors, Overtown became a worn-out husk of its former self. Middleclass residents moved from Overtown to Broward County, points north or out of state. City officials offered the poorest Overtown residents opportunity for public housing in Liberty City. As a unincorporated district without a tax base or political power, despair in the concentrated poverty of Liberty City was palpable.

The federal, state and city government did not develop a comprehensive plan to preserve & enhance black businesses and middleclass homes in and adjacent to Overtown concurrent with Cuban Immigrant assistance. When urbanologists and historians look back on 1959-1990 Miami, they can easily document how Cold War Cuba Policy destabilized Miami’s black community.

Miami officials also thumbed their nose at the Nelson Mandela Peace Tour in the early 1990s, because Mandela voiced support for Castro. Those leaders ignored that ending Apartheid in South Africa was a big deal for African-Americans. Castro, despite his many faults as a dictator, helped end Apartheid in South Africa long before the U.S. government joined the Anti-Apartheid/Free Mandela bandwagon. Sadly, Many young Cuban-Americans demonstrated brotherhood with Black Miamians and cherished Mandela’s contribution to humanity. Sadly, they were painted with the same brush as other Cuban-Americans who overlooked the Cuba-South Africa connection.

Today, civic officials are more aware of Miami history. They acknowledge that more work is required to undue past wrongs towards the black community. The challenges of Liberty City, like other economically challenged neighborhoods in America, remains. But city officials have stopped razing historic structures in Overtown and are now engaged in its renewal.

In many ways, race relations have progressed to cordial. There is an unmistakable sense being cultivated that all people are working to make Miami a better 21st Century City. The influx of Caribbean immigrants has also made Miami a haven for black entrepreneurs in dining, shopping, entertainment and transportation.